Q&A: A Second Chance – As Advocate for Women Migrants in Argentina

BUENOS AIRES, Aug 26 2009 (IPS) - In her 48 years, Natividad Obeso has already lived several different lives. There was the time when she lived in her native Peru as a successful businesswoman and mother of four. Then there was the time when she spent her days wandering the streets of the Argentine capital, penniless and alone, a fugitive of political persecution that she never understood. 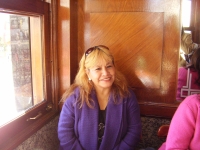 And, fortunately, there came the time for a second chance, when she became an advocate for the rights of migrant women around the world. Almost without realising it, her efforts to defend these women brought Obeso to speak on their behalf at the United Nations High Level Dialogue on International Migration and Development, held in New York in September 2006.

According to several international bodies, in recent years the number of women who migrate has been growing more than that of men. In the 1990s, Argentina received a wave of Bolivian, Paraguayan and Peruvian migrants, the majority of whom were women who came alone.

Interviewed by IPS at a coffee shop in Buenos Aires, Obeso apologised for the interruptions as other women came up to speak to her. They come from Peru, Colombia, Paraguay, Venezuela. Far behind her now is the loneliness of the early days away from her home country, when she combed the streets selling candy and dreaming about being reunited with her children.

In 1993, Obeso lived with her four young children in the region of Cajamarca, in northern Peru. She owned a beer distributing company and ran for mayor of her city. It was the early years of Alberto Fujimori’s decade in power (1990-2000) and his hard-line policy against guerrilla groups like Sendero Luminoso (Shining Path). One day, out of the blue, Obeso was surprised with the news that an order for her arrest had been issued by the police.

Even though she was a victim of Sendero Luminoso, which extorted monthly payments from her and had even kidnapped her at one point, the government accused her of being a terrorist and forced her to flee the country. Within hours she had to pack her children off to her mother’s and leave for Argentina, which she believed to be “the Europe of Latin America.”

“It all turned out to be so different than what I imagined,” she recalls now. She worked as a street vendor and as a domestic. She lived in boarding houses and shared rooms. It would be five years before she would see her children again. Now they are all grown up and studying at the public university in Argentina thanks to a law that she pressed for.

In 2004, Obeso founded the NGO Association of United Migrant and Refugee Women in Argentina (AMUMRA), which she currently presides, focusing on the prevention of discrimination against migrants and refugees and providing health, social and legal assistance to migrants, refugees and trafficked women.

Her advocacy work has taken her to at least twenty different countries, representing these women who are forced to leave their homes in search of “a better life for their families,” and making their voices heard.

IPS: How did you end up in Argentina? NATIVIDAD OBESO: I’m originally from Cajabamba, a province in the northern mountainous region of Cajamarca. I came to Argentina as a refugee, fleeing from Peru where I had been accused of being a terrorist. Argentina didn’t require a visa and it was considered the Europe of Latin America, so I came here. But what I found was so different from what I’d imagined.

IPS: What had you left behind? NO: Everything. I travelled alone. I left my mother. My four children. My siblings. I was a single mom, so I had to leave my children with my mother. The youngest was four and the eldest 11. I was a businesswoman and ran my own beer distributing company, Pilsen Trujillo. We had a good life.

IPS: What was the worst you suffered during your first years here? NO: The void. Having nobody. Migrants are the most vulnerable beings on earth. But I refused to become a victim and I drew strength from where I thought I had none.

IPS: What did you do when you arrived? NO: I came by bus, with other Peruvians. I thought that we were going to be dropped off at the Sheraton (Hotel). But they left us at an occupied factory. Migrants back then were a wretched lot. I came here with money in my pocket, enough to get settled, but as I had no information and no friends to lend me a hand, I quickly fell into poverty.

I was a street vendor. I sold chocolates on the street. And I worked as a domestic, paid by the hour. I wasn’t a live-in maid. That’s one of the things I fight for: so that no domestics will be forced to be live-in workers.

After that I opened a telephone booth centre and every time a Peruvian came in to talk to her children back home it would be like a knife piercing my heart. I was one of them. I had wandered through the streets, daydreaming that I was holding my children close to me.

IPS: How was your experience as a domestic worker? NO: I worked for a woman who claimed to see me as a daughter. Then, one year, on May 25 (a national holiday), I didn’t go in to work. The next day, she asked me harshly why I hadn’t shown up for work and I replied that it was because it was a holiday. And she told me: “Domestics don’t have holidays.”

That really got to me. I decided right then and there that I was never going to work as a domestic again. Then my brother came over and I opened the telephone booth centre. A lot of Peruvian and Paraguayan women who worked in private homes came here to use the phones. I don’t like to use the term ‘domestic’ anymore.

IPS: Has migration become an essentially female phenomenon? NO: Migration is not a phenomenon. It’s an experience. A reality that migrants experience every day. We don’t like to speak of a ‘phenomenon’ as if it were a natural disaster or something like that. We left our countries looking for a better life for our families, a better education for our children. And what we found were inhuman, xenophobic migration policies.

IPS: And do you think women are playing a major role in that experience? NO: Yes. Starting in 1990, there was a feminisation of migration. Men are afraid to leave their homes and not find work, so women have taken over that role. Women will do whatever they have to do to earn money for the family. Men won’t. They get overwhelmed by loneliness and sadness…

IPS: Are women more committed to sending back money? NO: Of course. We women feel a responsibility that they’re never going to take away from us: our children. We may leave our husbands, but we’ll never leave our children. Nobody touches them. Especially if we’re migrants. They can do whatever they want to us, we can put up with any abuse, discrimination, loneliness, but if they touch our pups, we’ll defend them with all our might.

IPS: When were you reunited with your children? NO: Five years after I left Peru. And that’s when the difficulties in giving them an education began. Not so much in elementary school, which is more flexible, but it was impossible for them to enrol in secondary school and the university. My 16-year-old son would cry because after so many years we were finally back together but he couldn’t study like he would have wanted.

So I turned to all the bodies that worked with migrants, without any success. I had to fight with congresspersons and senators until we obtained a law that gives migrants access to education. When we achieved our goal, many migrant women came to see me. I told them “perfect, but I’m not going to work alone.” In 2003, we got the first 41 young migrants into the university. And we founded AMUMRA.

IPS: What are the greatest problems that women migrants have had to face? NO: Abuse from consular authorities and mistreatment by many employers.

IPS: What sectors are these women employed in? NO: They’ve gained greater autonomy now. There are not so many women working as live-ins anymore. They work by the hour cleaning houses and then sell goods in the streets, for example.

IPS: And they still send money back home? NO: Yes, they only keep enough to get by on. But since 2001, many have brought their families here, so they don’t need to send money anymore.

IPS: What have you drawn from your experience as a migrant? NO: It changed me completely as a person. Thanks to many teachers here who supported me. When they saw what my struggle was, they helped me by pointing out my mistakes. I thank God for not having been elected mayor in Peru, because you have to leave to realise what is happening in your own country.