MEXICO CITY, Sep 24 2009 (IPS) - The same thing could happen to the people of Mexico City as in the Pixar blockbuster Wall-E, where the human species has abandoned earth because it is covered with garbage, and a trash collecting robot has been left to clean up. 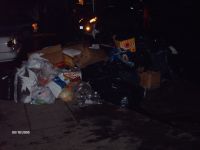 Garbage piled up in the streets of Mexico City after flooding closed entry to landfill. Credit: Emilio Godoy/IPS.

Heavy rains in the Mexican capital have drawn attention to one of the city’s most pressing environmental problems, the generation and collection of rubbish, because the entry to the country’s biggest landfill – Bordo Poniente – has been flooded.

The flooding initially made the collection of garbage – the city generates 13,300 tons of garbage, or 1.5 kg per person, a day – impossible. And although the city government has opened up an alternative route to reach the dump, collection services have not yet returned to normal.

“The problem we see is that an effort is not being made to reduce the volume of solid waste; there is no campaign to discourage people from producing garbage,” Patricia Ramos, head of Greenpeace Mexico’s solid waste campaign, told IPS.

Bordo Poniente, located to the east of the capital, is a 600-hectare landfill facility containing 70 million tons of waste.

The landfill has been the focus of a dispute between the national and city governments, with the former arguing that it should have been closed in 2008, as it can no longer cope with the garbage, and the latter saying it can continue to process waste for another three years.

Two other dumps located on the east side of the city receive more than one million tons of waste a year.

Local authorities plan to build an Integral Recycling and Energy Centre southeast of the capital, which would bring in funds through recycling, the generation of compost and the use of biogas from landfill areas. But the plant has not yet been built.

In the face of the flooding, the local chapter of the Spain-based International Court of Environmental Arbitration and Conciliation (ICEAC) denounced that the liquid runoff from the waste at Bordo Poniente was polluting the soil and groundwater.

The ICEAC was established in Mexico in 1994 to facilitate the settlement of environmental disputes between states, individuals, businesses or non-governmental organisations, through conciliation and arbitration.

Only 18 percent of the 142 cities in Mexico with more than 100,000 people have landfills, and a full 36 percent of the country’s garbage ends up in open-air dumps, which were to be closed down three years ago under a federal law on waste.

Besides the shortage of proper landfills, Mexico does not make use of the potential of waste to generate electricity or produce organic fertilisers on a large-scale, although there are six compost plants in the capital.

Ramos said there is very little separation, classification, treatment and reuse of garbage in Mexico, which leads to “tremendous waste.”

A study by the National Polytechnic University’s Interdisciplinary Centre for Research on the Environment and Development (CIIEMAD) recommended that the volume of garbage be reduced by means of integral handling, processing, treatment and reuse of waste, which would also prevent pollution.

The Mexico City government only treats 10 percent of the liquid waste generated by trash, while 620,000 litres a day leak into and pollute the soil and groundwater.

The biogas emanating from the garbage that has built up over the past five years in Mexico could generate 80 MW of electricity, and another 16 MW could be produced annually from the new garbage, according to the National Autonomous University of Mexico’s Institute of Electric Research (IIE).

The federal waste law does not specify who owns the trash – the garbage collection company, the landfill operator or the power utility – before it reaches the hands of federal or municipal authorities, making its use for economic purposes difficult.

The CIIEMAD study recommends the installation of more compost and recycling plants and the greater reuse of construction material waste.

Greenpeace Mexico has unsuccessfully lobbied for a specific packaging reduction law to reduce the amount of solid waste going to disposal, along the lines of legislation that exists in the European Union and Latin American countries like Argentina.