MASERU, Sep 18 2009 (IPS) - The Orange-Senqu River has a one million square kilometre basin that covers Lesotho, South Africa, Botswana and Namibia. The water it provides is crucial to industry in South Africa, but is also relied on by farmers and domestic users. 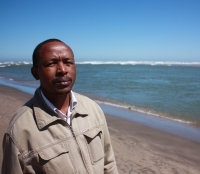 Thamae: 'ORASECOM provides a platform with which the countries can discuss and consult on the best way of addressing disparities.' Credit: Patrick Burnett/IPS

In 2000, the Orange-Senqu River Commission (ORASECOM) was established to advise member states on the shared use of water resources. ORASECOM executive secretary Lenka Thamae spoke to IPS during a field trip along the length of the river to answer questions.

IPS: What are some of the common problems across the four member countries when it comes to water? LENKA THAMAE: The principal one is water scarcity – the fact that the river system is already very heavily developed and supplies the economic heartland of South Africa. The rainfall region of the system reflects very limited input over a very large area.

The other element is to do with water quality. Limitations are brought about by a system that is highly developed. This relates to trying to maintain a respectable level of good quality water while supplying a variety of users.

One of the other problems is to do with catchment degradation. It causes serious problems in terms of infrastructure.

The other element is that of environmental requirements. The river has been extensively developed, but there is more understanding that to maintain environmental integrity and for livelihoods you need to be releasing water, in a way trying to maintain the natural system.

IPS: South Africa is the largest water user in the basin: What concerns do the other countries have about access to water? LT: Essentially the context is that South Africa under the apartheid system was an isolated economy. In that regard they developed natural resources to the extent that they could be resilient to isolation. Because water resources are one of the drivers for economic development, it's inevitable that as one moves to a more regional approach to economic development that water resources are one of the elements that need to be addressed to find ways to utilise the resources more equitably.

ORASECOM provides a platform with which the countries can discuss and consult on the best way of addressing disparities. The water has been extensively developed in South Africa which means there are limited options for the countries in the region. At the same time we are moving to a more regional approach.

IPS: Since it was formed in 2000, what work has ORASECOM been engaged in? LT: One of the first areas of work ORASECOM had to focus on was to agree on policies and procedures for the structure of ORASECOM. The next area was to agree on working areas that were related to the agreement itself (which was) to advise member states. One of these areas is to develop the institution, another to conduct studies that generate sufficient information for ORASECOM to be able to advise states and the other to come up with a basin-wide management system.

IPS: So moving forward, what is ORASECOM aiming to do? LT: Moving forward since 2004/05, some of the key pieces of work that ORASECOM has been focused on is the establishment of a secretariat. ORASECOM also decided to set as a target the formulation of a basin-wide water resources management plan by 2012. In order to reach that target one of the key elements is to develop some level of common understanding in the development and management of the system.

IPS: ORASECOM has been engaged in a variety of studies related to water. What are some of the most important areas being looked at? LT: All the studies are to try and establish a common understanding of the river system. We have done studies on groundwater potential, especially looking at where Namibia, Botswana and South Africa meet, to understand the potential. The outcome is essentially that there is limited development potential because of water quality (salinity), the state of some of the aquifers and because of the fact that some of the communities are quite sparse so development in terms of large-scale projects might be limited.

The other study is on the rehabilitation of wetlands in the Lesotho Highlands where the issue is that Lesotho has been experiencing extensive degradation of areas in the river system. The idea here as a recommendation was to look at different approaches to rehabilitating the wetlands.

We have also done studies looking at marginal waters – recycling water , desalination and looking at some of the potentials. Recommendations include that it would help for some of the sites to look at reuse and treatment of water.

The other level of relationship is with all the other basins that fall under the SADC who have signed the Protocol on Shared Watercourses.

The third level of relationship is through membership of the African Network of Basin Organisations (ANBO), an organisation which tries to promote best practice in river basin management in Africa.