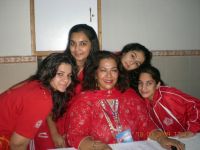 In 2004, Rubab Raza was just 13 when she won a wild card entry to Athens along with a male swimmer (Mumtaz Ahmed). She was the first female swimmer to represent Pakistan at the Olympics. Four years later at the Beijing Olympics, Kiran Khan – another wild card entrant, from Lahore – swam for her country.

Pakistani female swimmers are making a splash despite the hurdles, which include “little government support” and social conservatism, Masud tells IPS. Excerpts from an interview.

IPS: Last weekend, after schools countrywide were closed following the suicide bombing at the Islamic University in Islamabad (Oct. 20) there was a major swimming competition in Karachi. How does the ongoing violence affect sport? VEENA MASUD: Yes, that was the 18th Sindh Women’s Swimming Championship organised by the Karachi Women’s Swimming Association. The club where the event was being held told us categorically to cancel. But our sponsor said it’s up to us. We decided to go ahead. We are not afraid, we refuse to be held to ransom by this terrorism.

Contrary to popular perception women’s sports were never banned in the country - but attempts were made to rein in women. The worst days were the ‘Zia years’ – 1977-88, when the then military dictator Gen. Ziaul Haq tried to restrict women's participation to strengthen his ‘Islamic’ credentials.

"We used to wear shorts," recalls a former sprinter," but under Zia we had to adhere to a more restrictive dress code."

Pakistani sportswomen are up against all kinds of hurdles, but they refuse to give up.

"Women in sports have continued to flourish in their own limited circuit in spite of the constraints, quite poor training facilities and a lack of substantial financial support," notes prominent sports journalist Gul Hameed Bhatti.

"When Rubab (Raza) went to Athens in 2004, she revealed that she hardly got an equivalent of 30 dollars per month from the Pakistan Swimming Federation. She couldn't engage the services of a foreign coach to train her for the Olympics but her parents were very supportive and took on almost the entire financial burden of getting her ready for the big event."

Women participate in various sports all over the country - cricket, hockey, track, swimming, football - even participating in international competitions.

They face a lack of government support and patronage, and constant threats from religious hardliners who disapprove of women being visible in any public sphere.

The disapproval takes the form of public protests - as when Pakistani female swimmers first competed at the international level - to physical attacks, like the disruption of the mixed-gender mini-marathon in the small town of Gujrat in Punjab province in 2004.


The club management then said if we could arrange our own security, we could go ahead. We had a massive turnout – 280 swimmers representing 22 institutions. They bettered 30 provincial records. See, 90 percent of Pakistanis want to go forward, get on with our lives. We can’t allow this (disruption) to happen.

IPS: You were born and educated in the West Indies. How did you come to Pakistan? VM: I came back to my roots – my grandfather (in Trinidad) told me that one of my forefathers was from Sindh; he went on a ship to the West Indies as indentured labour.

My husband (a Pakistani) and I were in London when our son was born in 1979. We moved back to Pakistan because we wanted to bring him up here. I love it; the culture is so rich, and there is so much to offer.

IPS: You are not a swimmer, how did you get involved? A. You don’t have to be a swimmer to be a coach, or a technical official. I coached my son (Kamal Salman Masud, now 30) in swimming. Until then, the army, navy and air force swimmers won all the competitions. My son set several national records. We’d be at the pool and his (girl) friends wanted to swim competitively too. That’s how it started.

Four of us (mothers) started the Karachi Women’s Swimming Association in 1991, mindful of the confines of Islamic culture. We had great difficulty getting sponsors for the First Sindh Women’s Swimming Championship – but 75 girl swimmers competed, representing local clubs and schools.

In 1994, the then Benazir Bhutto government agreed to host the Second Islamic Women’s Solidarity Games. Iran, the initiators of these games, insisted that swimming be included. The Pakistan Sports Board (PSB) and the Pakistan Swimming Federation (PSF) asked us to form the Pakistan Women’s Swimming Association.

The games went back to Iran when Pakistan couldn’t conform to standards but we encouraged the formation of women’s swimming associations. Sindh and Punjab (provinces) did that.

Now, we have over 300 swimmers from 30 schools and clubs around the country.

IPS: How have Pakistan’s women swimmers fared internationally? VM: They’re improving all the time. Now a lot of our swimmers are doing ‘American A’ timings (coached by my daughter-in-law Melanie Masud, herself an ‘American A’ swimmer). They’re very tenacious and they have their parents’ support.

Fourteen of our swimmers at the Fourth Islamic Women’s Games (Tehran, September 2005), won 10 of Pakistan’s 19 medals. They came second in the swimming events and seventh among the 45 participating countries.

The introduction of the longer “fast-skin” swimming costumes made it possible for our girl swimmers to participate in international competitions. For the first time, Pakistan sent two women swimmers (Sana Wahid and Kiran Khan) to the Commonwealth Games in Manchester, July 2001.

When we convinced the Pakistan government to include women’s swimming in the 9th SAF (South Asian Federation) Games in Islamabad 2004, our girls took 14 medals, competing in the open arena on home ground for the first time.

Our swimmers returned to the Olympics after 40 years in 2004.

Pakistan is the only South Asian country to have two female technical officials on the Asian list, and one on the international list.

All over the world women get the rough end of the stick, but we have four women out of 10 members in the Pakistan Olympic Association (POA). I was in fact the first woman inducted into the POA when the International Olympic Committee in 1992 stipulated that all national committees must have women.

IPS: What hurdles do Pakistan’s women swimmers face? VM: First of all, there is little government support or funding. Also, swimming is still an elite sport for women, because you have to be a member of a private club to participate.

We need to push for the government to build infrastructure for swimming all over the country and take women’s swimming to the corners of Pakistan, so that Pakistani women have the opportunity to be at par with women all over the world. Then there’s the conservative mindset – many people don’t want their daughters participating in sports, or in public events.

Still, I believe that being determined and strong and tenacious will in the end bring you medals.