KAMPALA, Oct 19 2009 (IPS) - Over three decades ago a 14-year-old girl, her sister and a group of young teenagers from Bukwo headed to the River Amana for a ceremony that would change their lives forever. 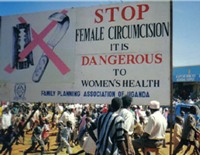 A billboard in Kapchorwa town, which is part of the campaign against female genital mutilation. Credit: Wambi Michael/IPS

Since her childhood, Gertrude Chebet had been told of the day she would become a woman. She was led to believe it would be a great moment of change and it was something to look forward to with much joy.

As she and her sister began that early morning trek, from their village in eastern Uganda, in the cold and through the bushes to the place of initiation, she expected it to be the best day of her life. But she was wrong. It turned out to be the most harrowing.

"One of the elder women overseeing the circumcision took a sample of our saliva, urine and pubic hair and buried it. She then ordered us to lie on the ground and after the first cut, I lost consciousness and cannot remember what happened next," she remembers now.

Even after passing out she and the other girls were not allowed to use modern medicine to treat their wounds. Instead she was forced to use cow urine, prescribed by her elders.

Chebet condemns it as unnecessarily cruel and inhuman. She is the chairperson of the Kapchorwa/Bukwo Women in Peace Initiative, a lobby group advocating for the enactment of laws to abolish female genital mutilation.

But it has turned out to be a long, hard battle to change an age-old tradition that involves the total removal of the clitoris and scraping of the female private parts.

In fact, even those in positions of power are finding it difficult to change the culture of mutilation against young girls. While earlier this year President Yoweri Museveni condemned the practice, his government has been slow to pass a total ban on female circumcision, partly because his party needs the votes of those who largely support the practice.

The strength of the voters is especially evident in communities where female circumcision is a wide-spread practice. Here, women who have not been mutilated have difficulty being elected and some have lost elections because of their anti- female genital mutilation campaign.

"My opponents used my stand against female genital mutilation as a weapon against me. Elders were saying who is this (she) to interfere with our culture?" she says.

Female circumcision is practiced among the Sabiny, Sebei and Pokot in eastern Uganda. It is conducted in various ways around the world, but in Uganda it involves the total removal of the clitoris and scraping of the female private parts.

"It is common for girls to bleed to death after circumcision. Others are infected with disease, some dying of tetanus. Many girls develop problems that affect them during child birth," Chebet says.

In 2007 the district councils of Kapchorwa and Bukwo passed by-laws prohibiting female circumcision. However these laws are largely ignored and in December 2008 close to 40 girls in Kapchorwa and more than 100 in Bukwo were subjected to the ritual.

Chebet admits that there is great resistance to the abolition of the practice, because it is risky especially for those with political ambitions.

Although Uganda is a signatory to the Maputo Protocol, a charter adopted by the African Union that guarantees the rights of women including the right to end female genital mutilation, it has not passed a law outlawing the practice.

Museveni’s government has been hailed at international female activist conferences for advancing the emancipation of women but has been slow to pass a total ban to female genital mutilation.

Museveni and his party members have had the wider support of voters from Kapchorwa and Bukwo districts partly because he has not interfered with their culture – especially the practice of female circumcision.

In April 2007 women activists under their umbrella boy known as Law and Advocacy for Women in Uganda petitioned the constitutional court in an effort to ban female circumcision.

They argue female genital mutilation is a violation of women’s constitutional rights and that it is a form of torture that constitutes cruel and inhuman treatment.

The Attorney General’s Chambers headed by Attorney General also Ministry of Justice asked the court to dismiss the petition. The constitutional court heard the matter was yet to pass a ruling.

Rukia Nakadama, a culture minister in Uganda says the government was now resolved to work with communities where female genital mutilation was practiced in order to ban it.

She says government will also back the anti-female genital mutilation bill presented to Parliament by a back bench MP – who is a member of the ruling National Resistance Movement party.

Kinkizi East MP, Chris Baryomunsi, a medical doctor from an area where female genital mutilation is not performed has tabled a private member’s bill in the Ugandan Parliament to ban the practice. Ugandan MPs, under article 94 of the Constitution, can initiate a law (under the private member’s bill) if they feel the executive arm of government has not initiated one.

Baryomunsi tells IPS that he feels obliged as a medical practitioner and a legislator to do something for girls and women in that part of Uganda.

"I feel pain and sadness that this is going on in Uganda. That women, willing or unwilling, are subjected to crude methods of having part of their bodies cut when there is no medical benefit. I had to take the lead to fight this injustice," he says.

Baryomunsi is backed by some female activists including Uganda’s Parliament Deputy Speaker, Rebecca Kadaga, and he wants the law to criminalise female genital mutilation.

The bill proposes harsh penalties for traditional surgeons and parents who promote female genital mutilation; it suggests that they face up to 15 years in jail once implicated.

Baryomunsi also wants the law to provide that the consent of a girl or woman will not be valid defence, given the health risks associated with female genital mutilation.

The World Health Organisation in June 2006 released a first study to give evidence of the harmful effects of female genital mutilation. The study indicated that women who have had female circumcision were likely to experience difficulties during child birth and their babies were more likely to die as a result of the traditional yet gruesome practice.

Even male contestants in elections agree that the female genital mutilation has always come up as an issue among the elders concerned about preserving their culture.

Dr John Yeko, a MP representing Kween county, says the stand against female genital mutilation was not the only issue of concern during elections. It was the way people spoke about the issue that also made a difference.

"I agree some people have lost (elections) because of the language they use against female genital mutilation. I have personally spoken against it by emphasising its negative aspects."

Yeko has three daughters and they have not undergone the practice. "I totally support the ban against (it) because it is a useless part of our culture which should not be tolerated at this point in time," he says.

The situation is no different in neighbouring Kenya. Linah Jebbi a MP from Marakwet in northern Kenya says the issue of anti- female genital mutilation has always come up during the two times contested the elections.

She says she may have lost the elections if she was not involved in other campaigns, like the campaign for peace among the pastoralist tribes. Even at the age of 46, many elderly persons view her as a child who should not be entrusted with leadership responsibility.

"Today I accept that I am a child according to their perceptions. But I tell them that to be a leader –to be a member of parliament – is to be a servant. And whom do you send to be a servant? You don’t send a grown up, you send a child," she says.

(She was referring to that fact that in most African cultures it is believed that it is easy to send a child to perform a task rather than an adult because a child is presumed submissive and easy to send.)

"This may explain why women who have all the qualifications to contest for parliament find it easier to contest for a ‘woman seat’ in parliament even when they can compete for the main constituencies dominated by men in Kapchorwa and Bukwo districts," Kuka says.

In Uganda because of affirmative action, each district has to have a district women MP elected to Parliament. This is called the ‘woman seat’. For this seat, women compete with only fellow women. But a woman can compete for a constituency on the county level where she will compete with men as well.

But in areas were female genital mutilation is wide-spread, like the districts of Kapchorwa and Bukwo, women prefer to contest for the ‘woman seat’ rather than competing for constituencies to tussle it out with men.

Gertrude Kulany, also a former MP, says banning the practice through the law alone may not be the answer. She tells IPS that there should be affirmative action aimed at increasing girl-child education so that young girls themselves were educated enough to refuse to undergo the practice.

"I’m one of the lucky ones who escaped the practice because I had support from my parents. Most of my contemporaries went through it because every girl in the village who attained puberty had to be initiated into womanhood through circumcision."

She explains that the issue of female genital mutilation used to come up at every campaign and she had to tell people the facts about it.

She adds that even women were prejudiced against women who had not undergone female circumcision. "Even some women have been discouraged from voting for women who have not gone through female genital mutilation. (It is) because they have been made to accept the (belief) that a woman who has not been circumcised is not yet mature," Kulany says.

Baryomunsi expects the bill to win the two-thirds support needed for its passage and for it to become law. Public hearings are yet to be held in Parliament but several MPs have already committed themselves to support its enactment into law.