SEATTLE, Washington, Jan 27 2010 (IPS) - In the wake of a blizzard of economic hardship across North America, native land of the financial crash of 2008 and ensuing Great Recession, the shapes of other possible worlds are emerging from the drifts. Some are frozen and dystopian, but others may harbour green shoots of hope. 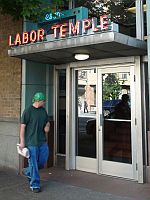 Seattle's Labour Temple was built in 1942, as the booming wartime workforce increased the number of local workers and trade unions. Credit: Peter Costantini/IPS

An unapologetic financial oligopoly led by investment bank Goldman Sachs, revived from a coma by an torrential transfusion of government cash, has emerged from the intensive care unit even more concentrated and voracious. Yet other potential scenarios seethe with popular and intellectual ferment challenging the free-market fundamentalism that has gripped the levers of political and economic power for most of the past 30 years.

Amidst the rubble left by the implosion of the financial system, working people and labour organisations across North America have suffered massive collateral damage. Major unions in the U.S. and Mexico have been seriously weakened, but here and there cross-border labour solidarity has blossomed.

“Workers are paying the price for the mistakes of Wall Street,” said Ana Avendaño, director of the Immigrant Worker Programme of the AFL-CIO, the biggest U.S. labour confederation.

“The global crisis is rooted in corporations’ campaign of radical deregulation and corporate empowerment: trade policies that rewarded and accelerated outsourcing, financial deregulation designed to promote speculation, the dismantling of our pension and health care systems, and an immigration policy that allows corporations to treat workers like commodities.”

“These policies resulted in a net loss of jobs, the collapse of the housing market, downward spiral of real wages, and a population of more than 12 million people – eight million workers – living in fear of being deported, too afraid to exercise their rights,” Avendaño told IPS.

It’s incorrect to label what happened an “economic crisis,” Karl Flecker of the Canadian Labour Congress told IPS. “In fact, it was larceny and greed that has brought us a jobs crisis, and the impacts here in Canada have been enormous” in terms of job loss, unemployment and precarious jobs.

For vast numbers of people across the continent and around the rest of the planet, the emergence of the world's largest economy from a period of official recession – two or more quarters of decline in gross domestic product – has not signaled the end of the economic crisis.

In the U.S., the official unemployment rate relented slightly from 10.2 percent in October to 10.0 percent in December. But it remained at its highest level in over a quarter-century, after fluctuating between 4 and 6 percent for most of the previous decade.

The underemployment rate, which includes those who have given up looking for work or are involuntarily working part-time, reached 17.3 percent. Average duration of unemployment was 29 weeks, the worst in the more than 60 years the statistic has been recorded.

Economist Mark Zandi of the credit-rating agency Moody's forecasts a rise in the unemployment rate to 10.8 percent by October. And many observers predict punishing levels of joblessness extending at least into 2011.

From 2008 to 2012, U.S. workers will have lost over a trillion dollars in wages and salaries to the downturn, according to a study by economists John Schmitt and Dean Baker of the Center for Economic and Policy Research.

Over the previous three decades, wages stagnated and economic inequality grew. Some analysts now flag these long-term weaknesses as root causes of the breakdown.

In Mexico and Canada as well, workers continue to bear the brunt of losses incurred by the global financial system. Both countries depend heavily on trade and investment with the U.S., whereas most other major hemisphere economies have diversified their trade and investment partners.

The North American Free Trade Agreement has partially integrated the economies of the three countries. Yet while trade has increased, large transnational corporations have reaped most of the benefits. In a recent example, according to Laura Carlsen of the Center for International Policy, a NAFTA tribunal awarded 77.3 million dollars in damages to agribusiness giant Cargill in compensation for a Mexican government programme blocking U.S. corn syrup imports to preserve Mexico's sugar industry.

Compared to the European Union's subsidies to poorer members, little effort has been made to raise the Mexican economy closer to the level of the U.S. and Canada. Yet in contrast to goods, services and capital, people have found borders increasingly fortified against them. Despite strong demand for Mexican workers in the North before the recession, crossing the border has become an expensive, life-threatening ordeal, while government treatment in the U.S. has grown more hostile and punitive.

The crisis has hit Mexico harder than any other country in Latin America. For the third quarter of 2009, Mexico's national statistics institute found that GDP had declined by 6.2 percent, with manufacturing dropping 13.4 percent and foreign direct investment down 37 percent.

Official unemployment has doubled. The United Nations reports that poverty has risen faster in Mexico than anywhere else in Latin America, with nearly 35 percent of Mexicans below the poverty line and some 11 percent indigent.

Emigration northward has fallen off dramatically. Remittances from the U.S., on which whole towns depend for survival, have also dropped precipitously.

To the north, Canada's historically strong social safety net has now frayed seriously, according to the Canadian Labour Congress's Karl Flecker. The situation feels a little like "you're on a high-wire at the circus, and you look down at the net and it's frayed and the ropes holding it aren't taut."


The United Auto Workers, once a flagship of U.S. and Canadian labour, had already been battered by the decline of the U.S. auto industry even before last year’s bankruptcies of General Motors and Chrysler. The union’s membership was down to 431,000 in March 2009, less than a third of what it was in the 1970s.

Although the Barack Obama administration bailed out the industry, the union made deep concessions on wages, benefits and pensions, both before and after the collapse of the two firms.

Labour worked hard to elect Obama, and the president reciprocated early by appointing a progressive secretary of labour, Hilda Solis. But labour law reforms long advocated by unions appear to sit further back in the legislative queue than some of the administration’s more high-profile concerns.

In Mexico, the labour movement has long been dominated by a largely corrupt, autocratic union federation. The Confederación de Trabajadores de México (Mexican Labour Federation) is tied to the party that ruled the country for 70 years. Independent unions that have broken free of the CTM have often been subject to repression from the government and business.

Now, however, one of the biggest and best known of the independents, the Sindicato Mexicano de Electricistas (Mexican Electricians Union), is at risk of extinction. President Felipe Calderón has thrown 44,000 union workers into the street with his October decision to seize, shut down and – the union warns – ultimately privatise the public electrical company, Luz y Fuerza del Centro (Central Light and Power). Despite months of resistance by the labour movement, Calderón may succeed in silencing a major independent voice for workers.

He defended the SME as “one of the most important representatives of Mexican democratic unionism.” Many unions across the continent have also condemned the government’s union-busting.

Some Mexican independent unions have formed mutual support relationships with their counterparts in the U.S. The Frente Auténtico de Trabajo (Authentic Labour Front), for example, has built a working partnership with the United Electrical Workers Union here.

In Canada, a labour action by mine workers has found solidarity on five continents. Some 3,500 members of the United Steelworkers union have been on strike for six months at nickel mines in Ontario and Newfoundland owned by Vale Inco, a subsidiary of Vale SA of Brazil. The second-largest mining company in the world, which acquired the formerly Canadian-owned mines in 2006, demanded steep cutbacks in bonuses, pensions and job protections despite record profits, according to the union.

USW contracts span the United States and Canada, and President Leo Gerard is a former member of the striking local. Unions in Sweden and Germany have protested against the unloading of Vale shipments in ports there, and a British union spearheaded the introduction of a motion of support in Parliament.

In Brazil, a USW delegation was invited to testify before the Brazilian Senate. Senator Paulo Paim criticized Vale and called the strike “a human rights issue,” saying the union could count on the majority of members of Congress there in “the fight for workers and retirees rights.”

The Toronto Star reported on Jan. 20 that internal documents indicate the company plans to cut its workforce by more than half over the next five years, and push those remaining for greater productivity. The union introduced the documents in a complaint of bad-faith bargaining filed recently with the Ontario Labour Relations Board. The company denied the charges and minimised the documents’ importance.

Despite the hostile economic environment, North American labour has been working to strengthen labour standards in marginalised, low-paid sectors such as domestic work and day labour. Racism in the U.S. Congress in the 1930s excluded some groups such as domestic and farm workers from legal protections and collective bargaining.

Now the federation has joined with the domestic workers’ network for talks at the International Labour Organisation this June on setting global labour standards for domestic work, Avendaño said.

As the official U.S. representative to the ILO, the AFL-CIO invited a delegate from the domestic workers to sit at the table as part of its delegation to the talks. The U.S. groups began dialogues last year with sister groups in other countries to encourage similar partnerships, and to coordinate work on international labour standards.

Avendaño also cited another trade union effort in solidarity with low-wage workers, the “Asian floor wage campaign”. Rather than chasing garment sweat shops around the globe from Mexico to China to Indonesia, U.S. groups are linking up with labour and civil-society groups across the lowest-wage Asian countries, including Indian trade unions.

In each, they are mounting proactive campaigns to establish basic labour standards and “stop the spiral to the very bottom.” The campaign, she said, is “looking at collective bargaining as the ultimate answer to poverty.”

Although immigration has become a political flashpoint in the U.S., labour and social movements there have come together in defense of immigrants. Some U.S. and Canadian unions, particularly in the service sector, are aggressively organising immigrants regardless of legal status, with strong support from major union federations.

Day labourers, the mainly immigrant informal workers who are among the most underpaid and unprotected, are working with organised labour on immigration reform and expansion of workers’ rights. In 2006, the AFL-CIO signed a cooperation agreement with the National Day Labour Organising Network.