MAURITIUS: These Women Chose the Sea

PORT-LOUIS, Jan 23 2010 (IPS) - She cannot swim, but Marie-Claite Hector is not afraid of the ocean. The 53-year-old pushes her small boat with all her strength towards the blue lagoon, starts the engine, and sets out to sea. 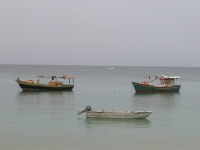 A handful of Mauritian women have overcome prejudice to earn their living from the sea. Credit: IRIN

Fishing in Mauritius is a male pursuit, but Hector is one of eight women in the coastal village of Bambous Virieux who have been cage-fishing in the waters off southwestern coast of the island for years.

“It’s almost 25 years since I started fishing. I learned how from my husband, François. I have since taught my sister-in-law and my two daughters how to earn a living from the sea,” says Hector.

She goes out to sea to check on the family’s traps: bamboo and wire cages beneath the surface, two metres long, and a metre high, into which fish swim and find themselves trapped. She began fishing out of necessity, to improve earnings for a family of six that included four girls.

“Life was difficult for the family with only one person earning. We had to feed and educate the girls and build a house. Money was very tight,” the fisherwoman recalls.

The livelihoods of artisanal fishers like Marie-Claite Hector of Bambous Virieux and Jacky Alexandre from Trou-aux-Biches are threatened by several factors. Particularly in the north of the island, increased tourism has upset the ecological balance; a new threat is posed by plans to set up extensive aquaculture operation just off the coast.

Proponents say farming fish in cages in the island's lagoons will boost output and create jobs; fishing communities and environmentalists fear it will further compromise coastal ecosystems. Click to listen to an audio report.


Hector never wanted to work in a factory from dawn to dusk, like thousands of others who have joined the textile and manufacturing industries.

“In the 1980s, this new industry recruited every unemployed woman who wanted to work. Many of my friends went in, but not me because this is not for my cup of tea. I love the sea and my freedom. I finish early so I get plenty of time to do many other things for the family and the community,” she said.

Hector speaks knowledgably of catches and environmental degradation. Ten years ago, she observes, fish was abundant in the lagoon.

“Now, it has somewhat decreased because of industrial pollution. But we earn more money because the price of fresh fish has gone up by more than 100 percent.”

Fresh fish used to sell for 50 or 60 rupees (about 2 U.S. dollars) a kilo and fishers needed to sell five kilos to make ends meet. Today a kilo of fresh fish can be sold to locals or tourists for 125-130 rupees a kilo.

Hector is proud of her work “because it brings me my daily food and I am not unemployed.”

She is a rarity in more ways than one. Only about thirty of the island’s 2,500 fishers are women. And amongst fisherwomen, her pride in her profession is also unusual.

In Trou-aux-Biches, on the northern coast of the island, the few fisherwomen who would speak to IPS did so on condition that their names be changed.

“It was very difficult for me to enter this profession that is dominated exclusively by men,” Ginette* told IPS.

Many of the men in the village regard her as an intruder in the profession and make unpleasant remarks about her. Teaching women the tricks of the trade is out of the question.

But what is harder to face, Ginette says, are the mocking remarks of other women who mock them for doing “a man’s job”.

Hector’s entry into the fishing profession was supported both by her husband and an NGO called Movement For Food Security that encourages women to join the fishing and agricultural trade.

Ginette shrugs. “We love the sea, that’s why we didn’t take work in a factory or one of the hotels around here.”

She and her friend Alberta* have persevered and today they work together, placing about ten cages daily, returning to check them three days later.

On their own, they have overcome prejudice and any fear of the sea. Ginette relates how one day, she was heading back to land when she found herself in a fog she could not see more than two metres through.

“I kept calm, stopped the engine, and waited for it to go away. It was an hour or more before I could start my way again. I was very scared. Now, we have learned to better understand the sea and tame it,” she said.

But Ginette and Alberta are worried by declining catches and would not encourage young women to follow in their footsteps. Sedimentation and algae blooms due to fertiliser washing into the ocean from inland plantations has been linked with dead or dying coral and reduced numbers of large fish.

As the textile and sugar cane industries wane, Mauritius has ambitiously expanded its tourism industry, creating new problems. Hotel waste water, careless anchoring of pleasure boats, and the activities of snorkelers and divers, combined with the removal of seagrass beds has harmed fish nurseries and further damaged the reefs where valuable fish live.

The most recent government initiative, the granting of licences for large-scale aquaculture just offshore alarms fishing communities and environmentalists alike, fearing it will do further harm to marine life.

But the country’s principal fisheries officer, Daroomalingum Mauree, is quick to reassure. “Pollution is our concern as well. We’ll monitor the water and biological parameters around the cages from scratch to finish.

“There will never be any negative impact on the marine environment. Many people are against the project without really understanding the essence of it. We want fishers to manage one such floating cage.”

Ginette is pessimistic. Gesturing to the sea beyond the Trou-aux-Biches Village Hotel, one of the many luxurious tourist resorts in found on the island, she says, “There is no future out there.”