WASHINGTON, Mar 26 2010 (IPS) - As details emerge about the backroom politics and contentious votes that led to the failure to protect any of the several marine species up for international protection at a key conference the past two weeks, conservation advocates are looking ahead to influence regional, local and even individual choices in the next round of battles to save the threatened species. 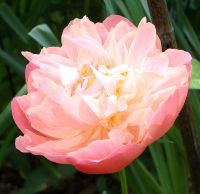 Red and pink coral were among the marine species that failed to win the necessary votes for CITES protection. Credit: Public domain

The meeting of the parties to the Convention on Trade in Endangered Species of Wild Fauna and Flora (CITES) that ended Thursday in Doha featured a record number of proposals to list marine species among the treaty’s appendices, thus limiting or forbidding their international trade.

But all of those species – Atlantic bluefin tuna, red and pink coral, and eight species of shark – failed to receive the votes necessary for those protections.

The conference was seen as a colossal failure by groups that had come to Doha energised by the opportunity to protect some of the planet’s most threatened – but also most lucrative – creatures.

“It is shameful that many CITES governments ignored science in favour of political gain when making decisions on marine species,” said Carlos Drews, head of WWF’s Species Programme. “If CITES cannot set aside political considerations and follow scientific evidence, the implications for conservation, sustainable use of marine species and coastal livelihoods are worrying.”

Much of the blame for the proposals’ failures has been put on Japan – where a single bluefin tuna can fetch 100,000 dollars – and China – where shark fin soup is a highly-prized delicacy. Reports have said that the two countries teamed up to form a formidable negotiating team.

Now, conservation groups and the delegations of countries that had favoured the listings are returning to their conference rooms to draft their next steps.

“This is a significant setback for these marine species, but we view it as only a temporary setback. We will redouble our efforts with other countries around the world to fight for the protection of marine species imperilled by international trade,” said U.S. Assistant Secretary of the Interior Tom Strickland, who headed the U.S. delegation.

“We are in process of taking stock and devising the next steps,” said Karen Sack, deputy director of international marine campaigns at Pew Environment Group.

She says her organisation will likely focus on gaining protections through the regional fisheries management organisations (RFMOs) that set catch limits and on educating consumers and industry.

The International Commission for the Conservation of Atlantic Tunas is the RFMO responsible for the management of tuna – as well as swordfish and some sharks – in the Atlantic. At its meeting last fall, it widely disappointed the conservation community by setting quotas for Atlantic bluefin that many, including the U.S. delegation, criticised for being higher than the science recommended.

“Given that both the United States and the European Union are members of ICCAT and supported strong action at CITES, we would expect them to go to this year’s ICCAT meeting and secure strict science-based decision making on all of the fisheries that ICCAT manages, backed up by stringent enforcement,” she told IPS.

“The EU – which has the largest tuna catch quota and the most purse seine fleets – must step up and push for this ban at ICCAT, in line with its backing for the trade ban here at CITES,” said Sergi Tudela, head of fisheries at WWF Mediterranean.

To some degree, no matter what happened in Doha, the fate of the tuna was going to end up in the hands of ICCAT.

“One of the things people and Japan don’t really see is that CITES can’t manage these species by itself. ICATT is going to have to do its job by cutting the allowable catch,” Bill Fox, vice president and managing director for fisheries at the World Wildlife Fund U.S., told IPS prior to the conference.

Japan had also made it clear it would have claimed a reservation from a successful bluefin listing, thus allowing it and whatever other countries joined it in filing a reservation to continue to trade in bluefin across national borders.

The reason why Japan feels so strongly about bluefin, though, is the demand in that country for the fish. That demand creates an incentive to overfish, and reducing that demand may be the best avenue for reducing overfishing.

That is the other major front on which the next conservation battles will likely play out – for bluefin and all the species that failed to get CITES listing this time around.

This was the second time the coral proposals were rejected, Julia Roberson of SeaWeb, an ocean conservation NGO. She says that for now they will focus increasing consumers’ awareness of what they are buying and where it is coming from.

“People need to think twice before buying these coral products,” she said, referring to the jewellery and decorative items made from the threatened species of coral.

Roberson said they will also try to help encourage sustainable management practices on the local level and that the proposals may be re-proposed, but that it depends on whether the EU and U.S. want to put it forward again.

“For now there is no mechanism in place to say whether coral was harvested sustainably or not,” she told IPS.

“Some countries may not want to have commercially traded fish species listed on CITES because they are huge importers of fish, but if they want their citizens to be able to keep enjoying seafood and fish meals in the future, they are going to quickly need to change the way they act or our plates and our oceans will all be empty,” warned Sack.