GAZA CITY, Jun 2 2010 (IPS) - The dispute between Hamas and Fatah has torn apart the people of Palestine, dividing and distracting them from their common quest for freedom and independence from Israeli military rule. 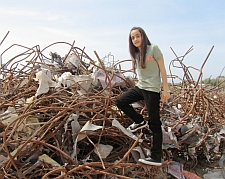 Salma will join the People's Journey to the US. Credit: Pam Bailey/IPS

In the last four years (since Hamas won a majority of seats in the legislative council, then seized control of the Gaza Strip in the dispute that followed), more than 300 Palestinians have become casualties of the “civil war,” and more than 1,000 have been injured. But a new generation is coming of age, and it is thirsty for peace, prosperity – and unity.

The story of Salma Shawa, 13, and Laila Samahadana, 12, is unique in some respects, but also symbolic of the promise for the future. The two girls grew up together in Gaza City, both attending the prestigious American International School (AIS) – the only co-ed, English-language school in the Strip.

AIS students come either from the wealthier families in Gaza or those who are smart enough to earn one of the coveted scholarships. Even the Gaza Strip has its “haves” and “have nots,” although Israel’s iron control over their movement is the great equaliser.

“We’ve known each other since kindergarten,” recalls Laila. “But it was in third grade that we became best friends.” The two girls were inseparable – that is, until the dispute between Fatah and Hamas erupted in 2006, when they were in the sixth grade.

Laila’s father was a high-ranking member of Fatah – putting her squarely in the cross-hairs of the evolving crisis. “I lived the war,” she recalled.

“My family’s home was in Tal El Hawa (a neighbourhood in Gaza City where the forces of Fatah and Hamas squared off). Hamas fighters occupied the building right across from where I lived. They were on the roof of their building and Fatah was on the roof of ours.”

Salma, whose family has remained firmly neutral in the dispute, was terrified for her friend. “(Hamas) burned the building right next to Laila and I was so freaking scared for her,” she says.

Hamas won the battle for control of Gaza, and Laila’s father fled first to the West Bank and then to Egypt. For a year and three months, Laila, her mother and her four brothers and two sisters lived without him, wondering when they could be reunited.

In 2008, they were finally able to join him in Cairo. However, Laila was forced to leave behind about 25 aunts and uncles on her father’s side, 13 on her mother’s side – and Salma.

“In the beginning, I was so happy to escape,” recalls Laila. “I wanted to be with my dad, and Egypt was much safer. But living away from my friends and the rest of my family is hard. One of my uncles is in the hospital now and we can’t be with him.”

But watching from afar Israel’s deadly war on Gaza, launched on Dec. 27, 2008, was even harder. “Hearing about and seeing on TV what was happening was like watching an action movie, but a bad one – because people I knew were dying.”

For Salma, the separation was equally as hard. Laila was the second good friend forced to flee Gaza because of a father’s affiliation with Fatah.

And then, on Jan. 2, 2009 – just days after Israel launched what would be a massive 22-day attack on the densely populated Strip – the school the two girls had once shared was destroyed in the early-morning hours. The building was bombed and the night watchman was killed.

“It was about 3 a.m. when the Israelis bombed our school. My mom got a news bulletin texted to her mobile. At first, I didn’t believe it. I mean, it was just a school, and it even had an international faculty,” recalls Salma. “But then my friends started calling and the story was all over Facebook. Later, I saw it for myself. There was almost nothing left.”

Today, Salma still attends AIS, but in much smaller, cramped quarters and without the American teachers that were part of what made it so diverse and special. And she and Laila have managed to transcend the adult hatred that tore them apart, remaining fast friends via MSN chat and mobile phone.

Despite the near civil war that continues to rage between Fatah and Hamas, they dream of a future in which their people are united behind their common heritage as Palestinians.

“The kids in class still fight over which is better, Hamas or Fatah,” says Salma. “But we are all Palestinians. That’s what’s important. We need leaders who care about more than themselves and money and who has the most power. Improvement starts with ‘I’.”

However, the girls say, Palestine cannot help itself until the playing field is levelled. And right now, the international community – through its almost unqualified support for Israel – is giving it a significant handicap. That will be their message when Salma and Laila join on Jun. 15 ‘The People’s Journey’ – a speaking tour across the United States designed to confront Americans with the often-disastrous consequences of its foreign policy.

Also participating in the tour are two Iraq war veterans, an Iraqi refugee and – via Skype Internet messenger – a youth from Afghanistan. One of their dreams for the tour is to meet President Barack Obama in the White House, to make their plea in person. And while that wish is met with raised eyebrows by adults who have become cynical with experience, it is their unquenchable optimism that makes hope for peace still possible.

Despite the patriarchal society in which they live, both Salma and Laila aspire to be president of the future country of Palestine; they only argue over which of them will win that honour first.

“I want to build Gaza to be the best place in the world,” says Salma. “I want to work as a businesswoman, to make money I can use to help my people, to make Palestine a place everyone will want to visit. I will build homes for the poor, and every single person in Gaza will have work. By doing this, I will win people’s hearts, and I can get elected president of Palestine!”