Liberian Woman in the Centre Circle

MONROVIA, Jul 11 2010 (IPS) - Vivian Howard is a single mother who cooks and cleans like just about any other woman in Liberia – but in her work life she’s in charge of 22 strong, athletic men. The first and only centre female referee in Liberia with a FIFA badge, Howard is standing shoulder to shoulder with the men of Liberia. 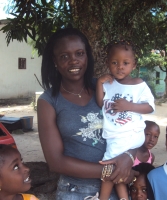 There’s a perception – especially in the international community – that in a country led by Africa’s first elected female president, women in Liberia are taking the lead in all walks of life.

It’s true there are more female ministers in Ellen Johnson-Sirleaf’s government than ever before, new legislation has been passed to protect and promote women’s rights and some women are being given chances in life that they had never experienced.

Which makes the sight of Vivian Howard taking charge of a friendly match involving some of Liberia’s overseas-based stars in Monrovia’s Antoinette Tubman Stadium all the more impressive.

“I feel so happy when I’m in the centre,” Howard says. “I feel I’m a man even though I’m a woman. But there’s the challenge: what men can do, I can do it.  So I’m there to encourage other female referees to do what I can do.”

What men can do, women can do – this is something you hear in Liberia quite a lot. After 14 years of civil war, Liberians voted in Johnson-Sirleaf and women all over are finding the strength to push themselves forward too.

Howard lives a 40-minute drive from Monrovia’s Antoinette Tubman Stadium, down a long dusty track in a small concrete building shaded by a huge mango tree.

Life a a single mother is not easy for her. She gets no support from her daughter Blessing’s father, relying entirely on her income as a referee. The Liberian Football Association pays her around 90 U.S. dollars a month.

“In Liberia we call it hand to mouth,” she says, “because once you have it… you just go to the market and buy food to it and take care of your family.”

Howard lets none of this inhibit her as she controls a match featuring football players who star in various leagues. Many of the players taking part in the game are on a rare visit home, reacquainting themselves with a country working hard to complete the transition to peace after 14 years of civil war.

David Gbemie, who plays for Bolton Wanderers in the English Premier League, is home for only the second time since he signed for the English club eight years ago at the age of 13.

“It’s quite scary, I thought the war was still the same and it was quite crazy.  But it’s normal, it’s like living in Manchester!”

Liberians are delighted to see their best players with their own eyes. Gbemie is a major celebrity in Yekepa, his hometown in Nimba county.

“I can’t sleep because people sleep around my house waiting for me to come out.  It’s quite amazing like.  Things that don’t happen in England happen here, it’s quite crazy.”

Liberia’s best-known player, the now-retired George Weah, was arguably Africa’s most outstanding player in the early 1990s, winning the African Player of the Year three times and recognised as FIFA’s World Player of the Year in 1995.

The national team, known as the Lone Star, has never reached the same high levels, but many have high hopes following the appointment of former Hungary coach Bertalan Bicskei as national coach.

“[The fans] really want something to happen in this country.  You know since George Weah and the other guys left, fans say we haven’t done anything.  I think it’s about time for us to give something back to them. They’re there cheering under the rain and the sun and I think this time around we can qualify for 2012 Africa Cup of Nations.”

“I just want to urge the other female referees what I can do they can do also.  And some can even do better than what I can do so I urge them to come to the game because I’m not only here as Vivian, I’m here as Liberia.”