MIGRATION-PORTUGAL: On the Football Pitch, Everyone Is Equal

LISBON, Jul 28 2010 (IPS) - Football functions on so many levels. It can be big business, moving astronomical quantities of cash, with obscene salaries for owners, coaches and star players. And it can be a widely played sport, found in every park, street or vacant lot. And it can be the common ground for multicultural coexistence. 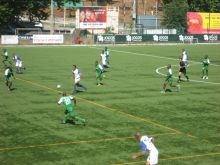 The idea of common ground is behind Portugal’s Little World Cup of Integration (Mundialinho da Integração, in Portuguese), says Antonio Nascimento, one of the organisers of the second annual non-professional football championship amongst foreigners held in this country.

The relevance of this intercultural sporting event is reinforced by the personal commitment of Portuguese President Aníbal Cavaco Silva, who heads its Commission of Honour.

Hosting the matches of the “Mundialinho” are Lisbon and the neighbouring city of Sintra, just 30 kilometres away. The tournament was inaugurated Jul. 17; the championship match is slated for Aug. 1.

The tournament’s mission is to promote a sporting and social gathering of people of different national origins and professions, from humble workers who have come to Portugal to build a decent life, to university professors, doctors, economists and diplomats.

The most enthusiastic participants are the immigrant labourers, especially those coming from Portugal’s former colonies in Africa, as well as from Brazil, and from the countries of Central and Eastern Europe.

Spain and Portugal are the only European Union countries that hold this type of competition, financed primarily by their national and municipal governments, with the aim of creating an environment of equality and integration amongst foreign residents and with the broader society.

“Because of its social component, one could say that the Little World Cup is the most democratic and egalitarian sporting event held in our country,” Nascimento, an advisor to the mayor of Sintra, told IPS.

However, the scores of the football matches held so far have not been at all “egalitarian.”

The teams from the African countries and from Brazil, made up of mostly of youths who generally have physically demanding jobs and play football in their free time, have truly thrashed their opponents.

Nevertheless, the matches were “not at all humiliating for the losers,” assured Nascimento, because the teams from Germany, Spain and Britain are made up of immigrant university-trained professionals “who play football only on weekends for fun.”

The immigrant labourers, meanwhile, especially the Portuguese-speaking Africans, “train every day, driven by the idea of becoming professional footballers, starting in the second or third division, which would increase their income, and allow them to provide a better life for their families,” he said.

Offering another explanation is Hungarian Szabolcs Sebestyén, economics professor at the Catholic University and member of the British team because there weren’t enough players from his country to form a team here.

“The true reason behind those thundering defeats of the Europeans is the fact that there are some professional footballers playing on the African teams,” Sebestyén told IPS.

Nascimento stressed that the rules prohibit professional players from participating in the Mundialinho, but admitted that there have been some cases in which Sebestyén was correct. But when that occurred, he said, the penalty was forfeiture of the match.

“The only verified case this year was not reported on an African team, but Brazil’s, which easily beat its opponent, but when it was discovered there was a professional player on the pitch, the maximum penalty was given, which was to invalidate Brazil’s victory and award the win to the opposing team,” he said.

However, the rules do not prohibit the participation of former professionals, “and that must be the case that the Hungarian professor is referring to,” said Nascimento, and cited Sebestyén’s own team, “which has a former English professional, who is about 50 years old, but on the pitch he looks 35.”

Nascimento noted that “what is really important is the coexistence of people of all origins and professions, without violence or misconduct, a way to get to know each other through a sport played in its purest state.”

The two-week tournament was organised by the municipal governments of Lisbon and Sintra and the national government, through the Interior Ministry, the Secretariats of Sports and of Social Integration and through the office of the High Commissioner for Migration.

Contributing to the financing were two companies: Ibérica Comunicação Empresarial, and Mota-Engil (which has major construction projects in Angola), as well as the Catholic institution Santa Casa da Misericórdia.

The Foreigners and Frontiers Service and the immigration police haven’t let the opportunity of the Mundialinho escape them — not to check the participants’ immigration papers, but rather to promote legalisation for those who might be undocumented.

Broader and more ambitious projects are planned for future tournaments.

For the Third Little World Cup of Integration, in 2011, initiatives include matches between immigrant children and exhibitions for artists from the participating countries.

Why do these integration football tournaments only take place in the Iberian Peninsula countries? Nobody wanted to give a definitive response, but Nascimento, who is also a historian, ventured a possibility for why his country stages the Mundialinho.

“Portugal started globalisation six centuries ago. Its former colonial empire was always marked by a strong mestizo (mixed race/ethnicity) component and our policy of integration, with its ups and downs, continues to have that hallmark.”