PORT LOUIS, Jul 2 2010 (IPS) - Workers from Bangladesh have helped Mauritius to achieve the economic success and world market share that the Indian Ocean island state boasts about. But many live and work in conditions described as akin to “modern slavery”, apart from facing discrimination, the denial of labour rights and even violence. 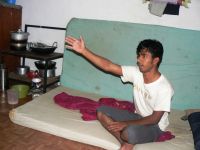 This Bangladeshi worker, photographed in his dormitory, did not want his name to be published as he feared being sent back to his home country. Credit: Nasseem Ackburally/IPS

The 32 year old Mohamed Amin* left his wife and two children in low-income Bangladesh 23 months ago to look for greener pastures in the manufacturing industry in Mauritius.

Often, such economic migrants take out bank loans and sell their family land and assets to secure a job in Mauritius with a view to sending money back home to improve the lot of their families — and eventually their own.

“That (the promised 665 dollars) is big money in Bangladesh and I was prepared to make any sacrifice for it,” Amin told IPS who visited him at Grand Gaube, in northern Mauritius, where he lives in a house provided by his employer, Firemount Textiles.

But, today, the Bangladeshi worker earns little more than a quarter of that amount. “I have been cheated,” he said.

He is frustrated as, in about a year’s time, he will have to leave the island. Amin is yet to save any money to take home. His meagre earnings allow him to cover his living expenses and to send a limited amount of money to his family every three months.

Poverty, unemployment and the high cost of living are the factors that force Amin and his compatriots to leave their country and look for jobs abroad.

Expatriates work hard for long hours and are never absent. At times they are not paid — either because the factories have run short of cash or because they have closed. Hundreds of them, especially Bangladeshis, who dared to demonstrate in public were sent back home in the past year.

In their dormitories at factories, the situation is worse as hygiene and sanitation are poor. Many of them sleep on pieces of sponge, pestered by fleas and other bugs. The rooms, the kitchens and the yards are dirty.

IPS visited one such place at Grand Gaube — a one-storey concrete building with wooden partitions separating the rooms where about 50 Bangladeshi and Indian expatriates live.

Feizal Ally Beegun, spokesperson of the Textile Manufacturing and Allied Workers Union, showed IPS decrepit mattresses and kitchen tools that the workers have been using for at least 15 years.

“The employers do not care for them; they live like animals. How can humans sleep in such places?” he asked. “There is no government office where they can complain — even when their passports are seized from them.”

Imam Nasrullah Ginowrie, a social worker from Baie-du-Tombeau, near Port Louis, who has attended to Bangladeshi and Indian labourers for three years, calls them “modern slaves”.

“I am not allowed to meet them and they are warned not to complain to me. I know of some Bangladeshi women who have been kicked by their superiors. They are held very late at night in the factories,” Ginowrie told IPS.

Informed of the poor treatment prevailing in the manufacturing sector, newly-appointed labour and employment minister Shakeel Mohamed paid a surprise visit to a dormitory in Happy Village, eastern Mauritius, at the end of May.

He was shocked to see the unhealthy state of the dormitories, the toilets and the generally unacceptable hygienic conditions in which expatriate workers live.

“Some employers are still treating their workers as mere objects that will keep on producing until the end of their contracts,” he told IPS.

Mohamed regards such treatment as an insult to expatriates who come to the island to help factories meet orders for foreign markets.

“A migrant worker should enjoy the same terms and conditions of employment and the same prescribed salary than those granted to the locals, besides a free return air ticket, food allowance, lodging and accommodation in Mauritius,” the minister explained, referring to government regulations.

Mukeshwar Gopal, chairperson of the Mauritius Export Association (MEXA), admitted to IPS that some industrialists are to blame for the poor living conditions. However, he insisted that the dormitories are in a good condition when the expatriates first arrive.

“These are checked by the relevant health and fire services before the expatriates land there. We should understand that these people come from poor and dirty countries where hygiene does not exist. They put the dormitories in such a state that one cannot go inside because of the bad smell,” he told IPS, without flinching.

Some employers share Gopal’s discriminatory attitude, but not all.

As a sign of things changing, Gopal pointed to the Compagnie Mauricienne de Textile (CMT) that employs about 10,000 workers living in newly built houses “similar to five-star hotels”.

Beegun and Mohamed have appealed to other employers to follow this path.

Mohamed said there are loopholes in the legislation governing the recruitment of migrant workers that allow some employers to act irresponsibly.

But not for long, he warned. He promised that the ministry will soon decide on the type of accommodation and surrounding environment allowed for expatriate workers. *Name changed at the request of the worker who fears reprisal.