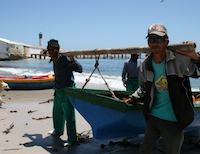 Fisheries are also important for food security. Research published by the New Economic Partnership for Africa’s Development in 2007 found that some 200 million Africans rely at least in part on fish for nutrition.

But parallel to the situation for most of Africa’s farmers, Africa’s fisheries resources generally provide fragile incomes for small-scale fishers.

Mari-Lise du Preez, a forestry and fisheries researcher at the South African Institute for International Affairs spoke to IPS about how fisheries can be a vehicle for community development.

Q: How important are Africa’s fisheries? A: When fish stocks collapsed in other parts of the world, a lot of interest started being paid to countries in Africa, for instance Western and Southern African countries. We have a big industrial fishing fleet from European and Asia seeing this as attractive.

On the other hand, you get countries where small scale exploitation of fisheries provide a lot of livelihoods. For instance in a country like Angola, more than 90 percent of the fish is caught not for export: it is caught for the local population.

I heard the Angola Minister of Fisheries saying, “Having no meat is no big deal in Angola but when there is a shortage of fish it becomes a political issue.”

It’s not the same everywhere but in a country like that, that’s where people get most of their protein from.

In terms of development, if you look at figures as well, worldwide there are less than one million people employed by the big fisheries sector, but it is estimated that the artisanal sector employs 50 million people.

Despite the debate over who catches more fish, there are many, many more people employed in the small-scale sector – this attests to the contribution of fisheries to economic development.

It’s difficult to generalise, but for countries on the coast, fisheries play a very big role.

Q: How do fisheries contribute to nutrition in Africa? A: In South Africa, people from the coast eat fish, and so do those inland, in restaurants there is sushi. In a country like Angola, most people rely of fish for nutrition, so yes, it is important.

Unlike minerals, fish are food. The sector therefore contributes directly to food security in Africa.

Q: There have been reports from different parts of the continent about how small-scale fishers are marginalised. Whether by industrial fishing fleets off the coast of Senegal or Somalia, or by problems with licences for fishing communities in South Africa. What can be done to protect and expand opportunities for artisanal or small-scale fishing?? A: I know in South Africa they have been speaking about small-scale fisheries policy for a long time. It’s an issue that hasn’t yet been sorted out and it’s a political issue. People can really get upset.

However, there are examples to look at like in Angola, there are many small scale fishers.

One example from there is to organise some of these fishers into cooperatives, similar to the ones for agriculture in South Africa. This is one of the ways [to support the sector], because it’s a highly informal sector and it’s difficult to know what’s happening in an informal sector.

Q: How sustainably are Africa’s fisheries managed? A: We have acknowledged many problems in the world lately, that involve natural systems. There is growing recognition of complexity, meaning that if you touch one part of it, you don’t only impact on that part.

In that sense, something like a water catchment area, even a forest: they keep water basins healthy; this in turn keeps fish healthy. For instance, a community polluting a water source affects the fish: they can’t breed.

Q: How does the quality of water management impact on fishing communities? A: If you look at the sea for instance. It’s interesting to look at the journey we have been on. First people thought, it’s inexhaustible. It was basically open access.

When the realisation came that marine resources can be exhausted, then came the laws, such as the exclusive economic zones. The idea was to protect the economic value.

What needs to be recognised is the big impact that fisheries and water resources in general have in enhancing lives of small scale fishers.