BUDAPEST, Oct 15 2010 (IPS) - As the Hungarian government continues its efforts to limit the consequences of a tragic toxic leak last week, it has also used the opportunity to attack a supposed former communist-turned capitalist oligarchy that allegedly runs the country’s economy. 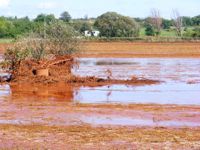 Last Monday one of the walls of a reservoir at the MAL aluminum factory in Ajka cracked, releasing over a million cubic metres of alkaline mud on nearby Kolontár and Devecser, two small localities located 160km west of Budapest.

So far nine people have died as a result of drowning or prolonged exposure to the toxic substances contained in the mud. The last victim died Wednesday this week in a Budapest hospital shortly after his daughter’s body was found in the fields surrounding Kolontár.

A task force has just completed the construction of a new barrier that will stop a second flood in the likely event that a wall in the original reservoir collapses. Experts are currently running tests on the new 1,500 metres long and 30 metres wide structure in a race against time.

The first leak released only 20 percent of the mud in the container; the remaining 80 percent is however less watery and is easier to control. However, new risks are posed by the drying mud in the surrounding area, as it has turned into a toxic dust which could be inhaled by locals.

Authorities have already evacuated all of the 800 inhabitants in Kolontár, but in nearby Devecser, home to 5000 people, children are beginning to return to school wearing breathing masks.

Hungary’s political elite has been visibly involved in the investigation to the incident, with conservative Prime Minister Viktor Orbán himself announcing the arrest and interrogation of the factory’s chief executive Zoltán Bakonyi.

“Announcing arrests is the task of a spokesman of the police, this is pure populist politics, but it is coherent with the expectations of voters,” Attila Gyulai, analyst at the Budapest-based Political Capital think tank told IPS.

Gyulai refers to the overwhelming electoral support Orbán’s party Fidesz received since it got elected last April with a two-thirds majority and the promise to carry out a “revolution at the ballots.”

The link between the election and the current investigation was admitted by Orbán himself who, in a recent parliamentary session on the toxic flood, stressed his government had been elected to bring Hungary into a new era and that this involved showing that “we pursue the public’s interests and stand up to these powerful people.”

‘These people’ are “former communists who attempted to escape from politics by converting their political capital into economic capital” during the privatisations of the 1990s, says Gyulai.

The Ajka aluminum plant is among the former state assets that were cheaply privatised back then, and many of the administrators of MAL are said to be connected to socialist politicians, among them former prime minister Ferenc Gyurcsány.

The aluminum industry was among the most dynamic under the socialist regime, which made it into one of the most sought after targets of investors during the privatisation in the 1990s, a process that still causes great resentment among Hungarians.

Yet in spite of right-wing talk of a country dominated by a former communist economic elite, Hungary is one of the most internationalised economies in Europe, and domestic capital usually supports whatever political force is in power.

“While some younger politicians demand that the whole process is revised, it is much more likely that the government will investigate individual cases,” Gyulai told IPS.

The first and easier target will be the aluminum factory in Ajka, with increasing indications that the plant is directly responsible for last week’s tragedy. The Hungarian daily Népszabadság reported that workers at the factory had warned management of serious damage at the reservoir. The workers claim management threatened them with dismissal if the information leaked to the outside.

Even more surprising is the result of an inspection carried out in the factory days before the disaster, which concluded there were no safety problems. Off the record some ask whether this is a case of serious incompetence by environmental authorities or an indication of widespread business corruption practices.

Another question is whether the incident is a consequence of decadent socialist industrialisation or the result of post-socialist wild capitalism, especially since the owners of MAL are among the 30 richest persons in Hungary.

Orbán seems more inclined to blame the privatisation process and, relying on his constitutional majority, approved a law allowing for nationalisation of the factory, where production will recommence at the end of this week under a new management.

The new law has been criticised for facilitating the nationalisation of companies without justification. Gyurcsány has claimed that Hungary is sliding into “Putinism”, implying many more companies could fall into state hands.

The former prime minister may have reasons to worry: “He seems to be the main target, but any company could come under attack, they just need to check if they fulfill environmental requirements,” the analyst says.