KOLONTAR, Hungary, Oct 8 2010 (IPS) - “There’s no way we can stay. It smells like cholera,” says pensioner Imre Fabian as he shovels the red toxic mud from his kitchen floor. The flood of toxic waste that hit people in Devecser is there to stay, and locals are beginning to accept that their life as they knew it is over. 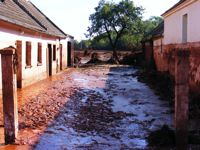 Devecser and Kolontár lie 160 km west of the capital Budapest. They were severely damaged after the reservoir of an aluminum factory in nearby Ajka broke, releasing up to a million cubic metres of a red sludge containing highly corrosive, toxic and slightly radioactive substances into one of the richest and most densely populated parts of Hungary.

Environment State Secretary Zoltán Illes has called it “the worst chemical catastrophe in the history of Hungary,” while Greenpeace spokesman Herwitt Schuster ranked it among the three worst incidents in Europe in the last 20 to 30 years. Authorities have started a criminal inquiry.

Five people have died and 120 are wounded, mostly from chemical burns. More than 500 are displaced. Three are still missing, and search teams are going through the mud. The search has led to several more cases of chemical burns as many fell into the slippery substance or were sprinkled by it. A journalist from the Hungarian state news agency MTI is among the injured.

Fabian was lucky enough to have left his house five minutes before it was hit by the flood, leaving for the more elevated neighbourhood Devecser, a town of 5,000. His next door neighbour wasn’t as lucky, an old woman who had her feet on the sludge for too long, leaving yellow spots on her skin and an ankle burnt to the flesh.

More deaths are feared as the effects of toxins may not be immediately visible or felt.

“Had this happened not at one in the afternoon but two hours later when everyone comes back from work, we’d be talking about hundreds dead,” Fabian told IPS. The mud did kill all his crops, and forms a 10 cm layer on his garden, as he shows by sinking a stick to the floor.

Both Devecser and Kolontár look as if a gigantic brush had painted a straight line on the houses and trees with a rusty red, adding to the locals’ feeling of bewilderment and helplessness against forces greater than them.

“I didn’t know what the hell this was, it came as a huge wave, I wasn’t even given a chance to escape,” Ágnes Gombási, who had to be rescued from her house with half her body immersed in the mud told IPS. “It felt like being covered in hot ash. Even after they took me out, my clothes were burning me. Now all I have is what I am wearing.”

Three kilometers separate Devecser from smaller Kolontár, formerly home to 800 people. On the right side of the road hills and trees are green and fertile; on the left there’s a landscape of rusty fields with scattered toys, clothing and furniture.

Some 40 square kilometres of land have been affected, damaging agriculture and clean water for the next two or three decades, experts say. The toxic chemicals show no sign of abating their deadly march, and in nearby Marcal River all life is extinct.

The Danube has also been affected, although the alkali sludge is already so diluted that there is no risk of biological or environmental damage for Hungary and its neighbours, authorities claim.

It is this catastrophe that turned Kolontár into a centre of global attention. The media circus follows the efforts of soldiers, firemen and rescue teams, while locals prepare goulash in a gigantic pot for the tired and hungry workers. But this is just the last breath of a village that has been sentenced to death.

“I had never seen such monstrosity, no image on TV caught what I saw,” one of the first firemen to arrive to the scene told IPS. “People had all gathered around the church on the hill, they could just look at how their houses where being taken by the mud. That is, if they had managed to get out.”

Cleaning teams are hurrying to put the mud back in the reservoir, as the unexpectedly good weather over the last days isn’t making their job any easier. If the mud dries it will become a toxic and elusive dust, which may force authorities to evacuate larger areas.

While authorities seem in control of the situation in Kolontár, in Devecser locals feel not much help has come their way. In front of the improvised rescue centre people are asking disoriented local authorities for food coupons, clothes and containers to take away the heaps of furniture and damaged goods that accumulate in front of their houses.

Most of the victims say they don’t plan to return. Yet many shops are starting to reopen, and cleaning ladies diligently sweep the floors. It is in this atmosphere that the people of Devecser wonder whether to stay or start a new life elsewhere. It may not be up to them.