JOHANNESBURG, Oct 4 2010 (IPS) - In the rural KwaZulu Natal town of Jozini, Thembeni Madlopha-Mthethwa has been the town’s mayor for a decade. And in contrast to the rest of the country, which has experienced numerous civil strikes and service delivery complaints, Jozini has rarely had any such problems. 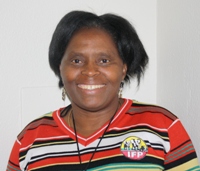 Thembeni Madlopha-Mthethwa, the IFP mayor of Jozini, says gender is not a limiting factor when it comes to leadership. Credit: Marshall Patsanza/IPS

The municipality’s success, Madlopha-Mthethwa says, is because they have a healthy and effective relationship with the traditional leaders and Induna’s (tribal advisors) and always involve them in discussions about major issues affecting the area. It is, Madlopha-Mthethwa believes, a system that could be used as a model of good governance.

But despite the good work done by her municipality which also includes successful gender-based violence and development projects, people across the country cannot learn from their example because of the lack of media coverage about them, she says. South African women in politics are often only covered by the media if they are in the forefront of their organisations or if they are involved in scandals, the Inkatha Freedom Party (IFP) mayor says.

Q: What challenges did you face when trying to get political support? A: When I started most women did not want to associate themselves with me. Women in my area in Jozini refrained from political activity and often left it for men (to participate). Despite politics being frowned upon by many women in my community I decided to stand up for what I believed in and for the change I wanted to see in my community. So I joined the IFP.

When I decided to campaign to become a Mayor, most of my support initially came from my relatives and close friends. Then women slowly started to join in as they liked the ideas I was bringing across. As my campaign grew, male politicians began to see the leadership qualities in me and they began to have confidence in me as a leader. The male members of the IFP supported my campaign and this motivated me to continue with politics as I realised that I had broken barriers and entered into what was perceived as a male-dominated field. When I became a Mayor in 2000 I felt that I had gained the confidence and support from my community and party colleagues both male and female.

Q: How did you break through into a mostly male-dominated political party which also has deep cultural roots? A: There is huge perception that the Zulu culture does not have room for female leaders because of its patriarchal roots. This perception is not true because even back in the day of King Shaka Zulu (the early 19th century Zulu King) there were women leaders. If you show the right leadership qualities and have confidence in standing (up) for what you believe in, then the men and the community will respect and support you. So culture does not offer any boundaries to female political leadership.

Q: How supportive has your political party been of your candidacy? A: When the political party appoints you as their ambassador they give you all the necessary support. They provide you with the financial support, documentation and necessary material to do your job regardless of whether you are male or female. Even with the support there will be times when you get the occasional opposition and lack of co-operation from party members who feel that they deserved to be appointed before you. These small things come with the job and should be seen as challenges that help build ones character.

Q: How is your relationship with the media? A: In my years as Mayor I have realised that it is really difficult to get media coverage on female politicians who are not controversial, especially if you come from a deep rural area. Our municipality really struggles to get the media to notice our good work and the achievements we have made in the community. The covering of women in politics by the media is very biased in this country. If you are a woman politician from a small constituency and is not viewed as big enough on the political scene, the media usually ignores you.

Q: How does the lack of media coverage affect the situation of women politicians in general? A: The lack of adequate media coverage on the work done by female politicians contributes to the lack of knowledge of what other women leaders are achieving in South Africa. Women will not be inspired by the works of other women if they are not made aware of it. The reason why people think politics is a male-dominated field is because they hardly hear of any effective contributions by female politicians.

Q: What are you doing as a leader to increase the presence of women in politics? A: As mayor I have tried to increase the number of women involved in politics in my area especially at council level and community level. Women are often motivated by other women in political positions so when they see a fellow female in a leadership role they also develop an interest in politics. Even if we do not go door to door enticing women to join politics we do notice that women in our area are offering themselves to wanting to joining and showing an interest in politics.

Personally I have been mentoring other female mayors from the IFP. When these women heard about the work I have been doing, they began to call me and wanted to know how to work with male politicians and how to establish good relationships with stakeholders in the community. My main advice to them is that they should not view themselves as women but as representatives of their people. Gender is not a limiting factor when it comes to leadership.