JOHANNESBURG, Oct 14 2010 (IPS) - Though practically invisible to the naked eye, a uniquely South African satellite has been orbiting the earth for the past year, creating an archive of images and jumpstarting what its creators hope will be a space revolution in the country. 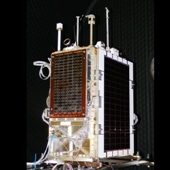 Dubbed SumbandilaSat, meaning “Pathfinder” in Venda, the satellite was designed to be an introduction to what will be an expanding South African space programme.

To date, South Africa’s forays into space have been modest and experimental. But scientists hope the country’s growing space agency can revitalise science, propel South Africa into the space race and empower the country as a whole.

In its 5,600 orbits around Earth since being launched in September 2009, SumbandilaSat has created 186 usable images. These images are processed and compiled into an archive by the Satellite Applications Centre (SAC) in Hartebeesthoek, which controls the satellite.

Dr. Corné Eloff, SAC Earth Observation Centre manager, said that though limited in their quality, these images can be used with imagery from other earth observation satellites to better monitor everything from the growth of informal settlements to the levels of South Africa’s dams.

“We could (monitor) every house in South Africa,” said SAC manager Raoul Hodges, as he displayed two photographs of Soweto, one taken in the 1960s and another taken recently. The photographs provide visual evidence that allows them to track government-built affordable housing. “Then we’d say, ‘Okay, what has really changed? What did government really build?’”

Prior to the launch of SumbandilaSat, the SAC had no automated process for processing the images captured by the satellite. Not only did a process have to be created but scientists had to learn how to recolor and resize the images.

“The main focus is to image as much as possible, and to use (the photographs) as a learning curb in terms of the actual tasking and image processing,” Eloff said. He added that a later stage the process would have to be an automated one.

While SumbandilaSat is controlled by the SAC, soon it will fall under the supervision of the South African National Space Agency (SANSA), which will be launched sometime before the end of the year, Hodges said. He added that the SAC will merge into the organisation on April 1, 2011.

The larger goal of invigorating the space program is for it to act as a catalyst for scientific progress in the country, trickling research and development down to students at institutions of higher learning and creating jobs which are needed in a country with a 25 percent unemployment rate, Eloff said. “Our main goal is to stimulate industry. Why? For social development.”

Shortly after the launch of SumbandilaSat, the Cape Peninsula University of Technology inaugurated its Satellite Systems Engineering Programme to train scientists in the emerging space field. Eloff said he expects programmes like this to become more prevalent as SANSA is launched and consequently expands.

SANSA hopes to have two more satellites running by 2018, Eloff said. Currently, the center is surveying the scientific community to determine what capabilities these satellites should have, Hodges said.

“There’s a lot of excitement in South Africa at the moment. We are entering an area of science and technology that was previously closed to us,” Eloff said.

Chris Engelbrecht, a senior lecturer of physics at the University of Johannesburg, said an expanded space program would allow new industries to benefit from the proliferation of detailed satellite imagery.

“(Enterprises) linked to agriculture, landscape and urbanisation will be allowed to grow. This should prove to increase productivity,” Engelbrecht said.

SumbandilaSat is experimental, primarily an opportunity for SAC to take full control of a satellite and guide it through its launch and maintenance while in space, an essential task that SAC has not undertaken before, Eloff said.

The centre is no stranger to controlling satellites, said Hodges. About 90 percent of satellites in the world pass over South African airspace on their way out of the atmosphere. And for about 60,000 dollars, the scientists at SAC will guide any satellite through its first few days in orbit.

SAC has performed this service for satellites developed both by international space programs and private enterprises. But SumbandilaSat is the first satellite SAC calls its own.

“The mission is to (keep) the satellite (working) and do the housekeeping ourselves,” satellite operations technician Farhad Hassim said, specifying tasks such as uploading programming and photography assignments to the satellite as part of routine operations.

Still, the satellite is not without its flaws. Three of the colour sensors on the satellite’s cameras failed after about two months in space, and all of the pictures the camera sends back — which typically encompass a 45 by 45 square kilometre of earth — are tinted red. Eloff said this is unsurprising given the satellite’s experimental nature.