PARIS, Jan 29 2011 (IPS) - A half a century after U.S. president Dwight Eisenhower named and denounced the military-industrial complex’s ever-increasing influence on world affairs, the arms trade thrives more than ever, with African states frequently being the destination. 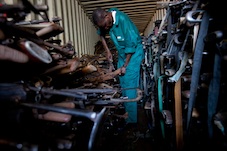 Although figures are hard to come by, the development advocacy group Oxfam estimates that, every year, sub-Saharan African governments spend around 18 billion dollars on weapons and defence, roughly the same amount as that of international development assistance to the region.

Most governments have a legitimate need for some defence equipment.

However, “many exporters have no legal framework or control of any sort to regulate arms transfers to countries that do not have legal controls themselves,” says Nicolas Vercken, who heads Oxfam’s French campaign for a comprehensive arms trade treaty.

“Our problem is with some of the weapons being used to violate human rights and humanitarian law,” he says. Currently, only the Netherlands and Britain require advice from their development agencies before deciding on arms exports to developing countries.

“A global treaty is essential to even out the playing field among exporters, and to close the loopholes,” Vercken explains. “Its main objective would be to block sales when there is a clear risk that weapons might be used to violate human rights or to impede a country’s development.”

The campaign for an arms trade treaty has recently gathered momentum at the United Nations. In 2009, a U.N. resolution paved the way for negotiations, which started in July 2010. Campaigners hope for a treaty by 2012.

“A treaty will be a reasonable monitor of new arms deals,” says Lauren Gelfand, Africa editor for Jane’s Defence Weekly. “But it would require a level of transparency that some international weapons manufacturers might be reluctant to accede to.

“Unfortunately, I do not think that a global treaty will do much to contain the flow of small arms, simply because of the numbers that are already in use or being traded,” she adds.

Small arms (any weapon an individual can carry, such as the ubiquitous AK-47 assault rifle) are the plague of many low-income African countries.

“They are easy to transport, smuggle and shift across borders; it is not beyond reasonable that a weapon used in Liberia or Sierra Leone may make its way to Nigeria and then possibly into the hands of rebels in Sudan,” Gelfand explains.

Sudan, which abstained from voting on the 2009 resolution and is currently on the verge of secession between the North and South after decades of civil war, exemplifies the problem of loosely regulated and weakly supervised arms transfers.

“The relative ease of access to arms in the region, coupled with Sudan’s chronic governance problems, mean that it is relatively easy to launch rebellions in marginalised areas,” says Claire McEvoy, who assesses security in Sudan for the Small Arms Survey.

The Small Arms Survey is an independent research project of the Graduate Institute of International and Development Studies in Geneva, Switzerland.

“The more weapons the governments in Khartoum and Juba acquire, the more we will see arms ‘seeping’ from their armed forces to proxies and non-state armed actors, via theft, sales, corruption, battle-field losses, and so forth,” she explains.

Even legitimately procured arms destined for governments run a strong risk of ending up in the wrong hands.

“Small arms are particularly difficult to track because they are so easy to conceal,” says Pieter Wezeman, a researcher with the Stockholm International Peace Research Institute (SIPRI), an independent institute researching arms and related issues.

“Many African countries have a strong culture of secrecy surrounding issues of security and defence, and their military is often reluctant to discuss arm deals,” he adds.

SIPRI estimates confirm that total military expenditure in sub-Saharan Africa in 2009 were close to 18 billion dollars. It is a drop in the ocean of the 1,531 billion dollars global arms trade.

“But in several cases, relatively small volumes of arms supplied to sub- Saharan African countries have had a major impact on regional conflict dynamics,” Wezeman says.

“It is important to be aware of the cumulative effect of these arms imports,” adds Corey Pein, editor of WarIsBusiness.com, a website which investigates arms deals. “The continent has accumulated so many firearms that smugglers often need go no farther than the country next door,” he explains.

Africa may not be the largest markets for arms manufacturers but it is one of the most vulnerable to weapons imports.

A global treaty regulating arms procurement could benefit least developed countries, which explains why only one sub-Saharan African country – Zimbabwe – voted against the U.N. resolution on negotiations for a global treaty.

However, “a meaningful treaty is still a far way to go, if it will ever be achieved,” says Wezeman.

“It is an important process if it leads to more regional or national agreements on arms exports but will it lead to a meaningful treaty restraining countries’ exports? Several major exporting countries have very different views on this,” according to him.

Still, campaigners believe nothing is set in stone. “Of course, not every state is in favour,” says Vercken, “but once a universal standard exists, even those who are not party to the treaty will be politically judged against these principles.

“A treaty will increase the pressure on reluctant exporters, just as happened with the Ottawa treaty banning landmines: the U.S. did not sign it but still applied most of its principles in the end,” he concludes.