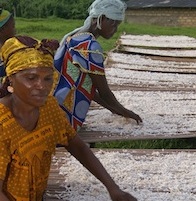 Experts say the laboratory-tested and field-proven cultivars – with their advantages of halved maturity time and increased production output over the traditional varieties – have demonstrable potential to significantly transform Zambia’s slippery socio-economic landscape.

Dr Martin Chiona is the RTIP team leader based at the state-run Zambia Agricultural Research Institute (ZARI) station in the Luapula provincial capital, Mansa. With 20 years experience at the ZARI Mansa station, the plant breeder is the only surviving member of the 13 local scientists who started the RTIP in the early 1990s.

“This is a great achievement – not only for us but also for the whole country. The benefits of the new varieties speak for themselves if you consider there are so many things you can do with cassava which you cannot do with other crops like maize or wheat,” he says.

“What can we fail to do with cassava? With this crop, you throw away literally nothing at all. I strongly believe that we have the capacity to do the same in Zambia only if we become a bit more organised in this sector,” says Dr Chiona.

He adds that in certain rural communities of Luapula Province, some traditional uses of cassava include floor polish, hair chemicals, animal and fish feed from the leaves, firewood and seeds from the stems and fodder from the peels.

Many poor rural folk are embracing the new cassava cultivars as the panacea for changing their poverty-stricken lives. Rose Mwelwa and Elias Mwila of Mansa have many things in common. They each have five children, supported on the subsistence growing of cassava.

After participating in the RTIP demonstrations for the new cultivars, they are now community leaders in the programme’s promotion campaigns. Both now have a new optimistic view about cassava growing.

“As a widow with a big family, the new varieties will enable me to feed my family. I will also be able to sell the surplus and raise more money for other uses like health and education,” says 41-year-old Mwelwa.

For the unemployed 40-year-old Mwila, the new cultivars have given him renewed impetus to fend better for his family: ” I have been using the old variety of cassava since 1992 only for meeting my family’s basic food needs. But things have changed and now I am even planning to start selling the surplus.”

Meanwhile, researchers and authorities may have delayed the harvesting of the improved varieties to facilitate the implementation of the seed multiplication component of the RTIP that involves the free redistribution of the stems among many other prospective farmers.

Yet that decision has not daunted MwelwaMwila and 2000 other members of the Mansa District Farmers Association (MDFA), a key implementing partner in the RTIP.

MDFA organising coordinator, Joseph Chanda, says they are all still elated by the belated harvest. Chanda is also a full-time government-employed agriculturalist with over 21 years of service in Mansa alone. “We fully support this programme because it will help even more farmers access the new varieties. Cassava is a staple food here in Luapula and almost every household is involved in growing the crop.”

Luapula is Zambia’s leading cassava producing province. The Central Statistical Office (CSO) projects that the region is expected to harvest 1.5 million metric tons of cassava in 2010, up from last year’s 1.3 million metric tons.

The 2008 statistics further show Luapula Province as having the largest cassava production area of 115,000 hectares compared to Lusaka Province’s tail-ending 544 hectares. Cassava has indeed ‘come of age’ as an effective weapon not only to help combat hunger and poverty but also to support socio-economic growth at all levels.

For Zambia, the period 2001 to 2010 has been a successful decade for the agricultural sector in general and cassava sub-sector in particular. While the decade has closed with a record-breaking bumper harvest for maize, the nation’s staple food, cassava has also recorded steady progress.

The CSO statistics show a steep cassava production rise from 815,000 metric tons in 2001 to the 4.7 million metric tons projected for 2010. But while fears are growing that Zambia’s 2010 maize bumper harvest may go to waste owing to poor storage, distribution and marketing policies, the story looks different for cassava. In collaboration with donors, the government has just produced a document called ‘Cassava: A Strategy for Zambia’ as a blueprint to guide the development of the sector from 2011 and beyond.

The Civil Society for Poverty Reduction (CSPR) believes that to be effective, all attempts to alleviate poverty in Zambia must target rural areas, where the majority of the poor live. The CSPR, a network of civil society organisations, suggests that authorities should use the Sixth National Development Plan (SNDP) beginning in 2011 to transform rural areas and reduce poverty with emphatic support to agricultural development.

All the indicators are that cassava is still poised to grow in stature, as not only an important staple to reinforce the national food security but also as a cash crop to stem hunger and poverty through sustainable economic growth. And the sky is the limit if the collective zeal and will of the farmers, researchers, authorities, donors and other players and stakeholders in the cassava sector in Zambia is anything to go by.