NAMIBIA: Basic Income Grant: ‘Let Others Taste What We Have Tasted’

WINDHOEK, Feb 16 2011 (IPS) - A universal Basic Income Grant (BIG) would create laziness and dependence among Namibia’s poor, say politicians. A daring pilot project set out to prove that this untrue. IPS spoke to one of the beneficiaries of the BIG. 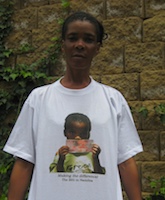 Bertha Hamases (32) is a tall, lanky woman with a weathered face and a friendly sparkle in her eyes. A few years ago she was one of the many people circling the drain in Otjivero, a dead end settlement one hundred kilometres from the capital.

Here evicted farm workers gathered in misery. For Hamases, a single mom with four kids aged between 9 and 16, life looked hopeless. Until a coalition of civil society organisations picked Otjivero for a privately-funded pilot project to show that a universal basic income grant can make all the difference.

Q: Can you describe your life before the BIG? A: I came to Otjivero eight years ago. Before that I had been living on a farm, but I fell out with my boyfriend and I had to leave.

So I took my four children and settled in the village. Life was hard, we were suffering. The kids would go to school, but I didn’t have money for the school fees. Because they were hungry the children couldn’t concentrate on their homework and it showed in their studies. The school would keep asking for money.

Once a month I would travel to Windhoek and beg money from relatives. With that I would buy a little food for my children. We lived in a small one-room ‘kambashu’, an iron corrugated shack. I would do nothing all day, maybe visit some neighbours and see what they could spare for me.

Life in the settlement as a whole was tough. Every second day people arrived after being chased away from the neighbouring farms. There was crime because people didn’t have money to buy food. Poaching from the farms was a big problem. There was prostitution, violence against women and a lot of alcoholism. The small settlement had something like five or six shebeens, informal bars.”

Q: In 2008 the BIG project started, how did that change your living conditions? A: Because there were five of us, the four children and I, all of a sudden we received 500 Namibian dollars ($68 U.S.) a month.

For two months I still remained in Otjivero, saving up money. Then I used the BIG money to travel to Windhoek. There, again with the money from BIG, I placed an advertisement in the newspaper offering my services as a domestic worker. After two days I got offered a job.

I now earn N$1000 a month plus housing and food. During the week I stay in Windhoek to work and twice a month I go home to Otjivero. The BIG didn’t stop because I worked elsewhere. That’s to show that the grant can create opportunities. Everyone that originally qualified still receives the money. Although after the pilot ended the grant was lowered to 80 dollars ($11 U.S.)

So the N$1400 (just under 200 U.S. dollars) per month I get now makes it possible to pay school fees and buy uniforms. My eldest goes to school in Windhoek and the other three are at a hostel with their school in Witvlei, which is a small town near Otjivero. The fees are N$200 per child per year and N$130 per term for the hostel.

The beautiful thing is that last year they all passed.I can also pay the bills at the clinic, so the nurses don’t have to confiscate my clinic card anymore. I also use the money to buy shoes, clothes and other goods in Windhoek and then sell them in Otjivero on the weekends. My profit is usually around N$400 ($54). Sometimes I buy wholesale groceries and also sell them, or I recycle bottles that I buy from the little children and sell in Windhoek.

I have extended the one room shack into a house with three rooms and God willing I will soon start a soup kitchen for the elderly and orphans.

Q: What has changed in Otjivero itself? A: The children all buy school uniforms and parents pay the school fees. People buy food and purchase TVs, dvd-players and stoves. Many have extended their houses. Where there few shops before, now there are 10-12 little shops.

The place is much cleaner because people don’t mind cleaning when they are fed and not hungry. Crime has stopped totally, while alcoholism and the beating of women has become much less. There was prostitution because women were hungry, but that has stopped completely.

The only problem is that we have become an attractive place to migrate to. Even people from Windhoek are coming because they think there is money in Otjivero. The population has grown from 1,200 to 2,000 people, which means we have to share the wealth.

Q: The President has said the grant will make people lazy, what do you think of that? A: It’s not true. The president says that people will not work when they get a grant. Well, I didn’t use to work before the BIG, but now I am working.

I used the money to advertise myself and found work. Other ladies in Otjivero also gave me money to place an advertisement in the newspaper for them and now they also work.

I am really proud that I receive the Big Income Grant and it should be continued in the whole country, so we can stop poverty in Namibia. So that others can taste what we have tasted.