Niger Delta Demands for Justice Undaunted by Decades of Violence

DAKAR and LAGOS, Feb 11 2011 (IPS) - Nigerian environmental rights groups have been making the case for the expulsion of oil companies from the Niger Delta in the southeastern part of the country at the World Social Forum in Dakar. 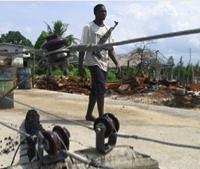 Speaking at a meeting organised by a group of Nigerian women’s environmental rights activists, Goodison Jim Dorgu, the Executive Director of the NGO Environmental Health and Safety Network, based in the oil-producing state of Bayelsa, said Nigerian civil society has come to the united conclusion that oil companies responsible for severe environmental degradation should leave without delay.

“We feel that the oil companies should leave the shores of the Niger Delta. There have to be fresh negotiations if there has to be oil extraction and communities should be at the dialogue to represent themselves in the negotiations,” said Dorgu.

Dorgu was speaking at a Feb. 9 session at the World Social Forum in Dakar, organised by Nigerian environmental justice activists, mostly women from the oil-rich Niger Delta. Other speakers outlined how the oil industry has provoked violence in the Delta, with women bearing the brunt of the assault.

Emem Okon, the head of the Women’s Development and Resource Centre in the city of Port Harcourt, alleged that the oil companies’ own security personnel have been involved in attacks on women. She also said the Nigerian army had committed grave violations of human rights.

“There are specific cases in Akwa-Ibom State, where Shell brought in a Shell crew and they attacked women. A pregnant woman was shot dead. There are also cases in Ogoniland where the government set up Rivers State Internal Security Task Force, and what these soldiers did was to use women as a weapon of war,” said Okon.

“A lot of women were raped, a lot of young girls were taken into sexual slavery.”

Sow the wind, reap the whirlwind

The Nigerian army’s operations in Ogoni peaked in the mid-1990s, in a brutal response to powerful mobilisation of people which had attracted international attention. Hundreds were killed and tens of thousands displaced; charismatic Ogoni leader Ken Saro-Wiwa and eight others were arrested and later executed by the government. The army carried out similar attacks elsewhere in the oil-rich southeast of the country.

The military campaign shattered non-violent resistance, but gave rise to armed groups whose activities – a mixture of progressive demands and profiteering from kidnapping oil workers and the sale of stolen crude – badly disrupted the country’s oil output.

Speaking to TerraViva from her home in Port Harcourt, Debbie Effiong of the NGO Gender and Development Action, said environmental degradation, poverty, activism and violence are intertwined.

“The environment is part of the livelihood of women; the land sustains them as farmers. Their farmlands are destroyed through oil pollution. So the violence by the military to suppress the people’s cause for environmental justice has prompted a lot of awareness among the women.”

She said that women are keen to take part in the struggle for environmental justice. But the growing role played by armed groups in the Niger Delta complicates matters.

“The violence by militants [the armed groups] affected women’s participation in the struggle for environmental justice at the stage when criminality took over the activities of the militants. The criminal aspect of it did not favour the struggle of women. Some of them lost their husbands, some lost their children, and it affected them emotionally in their quest to continue the struggle.”

The Nigerian government offered a peace deal and amnesty to Delta militants in 2009; most groups accepted. Despite complaints that the government has not held up its end of the bargain – militants again carried out several attacks on oil installations at the end of 2010 – nearly 27,000 young men are now undergoing skills acquisition courses and transformational training on non-violence.

It’s too soon to assess the long-term effects of ten years of anarchic violence in the Niger Delta; the call for oil companies to leave indicates that the population has not been intimidated. Effiong says that women too are ready to reclaim a place region’s political life.

“With an increase in the number of women aspiring for political positions – if women are given that chance in the coming elections, I believe there will be a major change positively in the way leadership is run in this country,” she said. “If women are given the opportunity to occupy elected positions, it will definitely enhance the struggle.”

In Dakar, Nnimmo Bassey, the head of Friends of the Earth International, told WSF participants that the struggle for environmental justice in the Niger Delta will be a long one.

“We are doing a lot of grassroots training and mobilisation and there are a lot of new groups coming up,” said Bassey, who is himself from the Niger Delta.

“The regime of responsibility has been so well entrenched and there’s the military backing for what the oil companies are doing, the govenment is behind them.”

Bassey says there are many restrictions. “A lot more work is still going to be done, but one day, when nobody expects it… the people will prevail.”