PORT-LOUIS, Mar 11 2011 (IPS) - “We have had enough of the training given to us in cooking, sewing and household works… We now have another dream: of participating actively in the development of our island at decision-making level,” says Marie-Anne Laganne, a political trainer at Women In Politics. 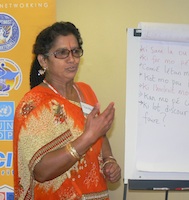 Geejabai Teemulen is among the women being trained ahead of this year's local government elections. Credit: Nasseem Ackburally/IPS

The Mauritian NGO has struggled over the past few years to have as many women possible enter into active politics. It trains 25 women every week in different regions of Mauritius with the hope that they’ll be able to secure tickets to stand for the local elections due later this year.

Women’s participation at decision-making level represents a major challenge in this Indian Ocean island. Though well-represented as voters and activists on the ground, very few women stand as candidates in an election, be it local or national. There has been a worrying decline in the numbers of women in parliament from 17.1 percent in 2005 to 16.6 percent in the 2010 elections. At the local level, only 5.9 percent of councillors are women.

Mauritius is among the few Southern African Development Community countries yet to sign the 2008 Protocol on Gender and Development, which, amongst other goals, calls for 50/50 representation of women in all areas of decision-making by 2015. Government argues that it cannot sign because the island’s constitution does not allow for positive discrimination.

Mirella Arjoon, one of the participants at a Women In Politics (WIP) training session held recently at Tamarin, a coastal fishing village in the south-western part of the island, said she always thought that politics was reserved for men only and that women’s place was at home.

“The time has come now for a change in politics. We always see the same old faces in this field and the same ideas,” she told IPS. “The world is changing, so the figure should change. But we should first learn the job correctly.”

Bernadette Jhowry, another participant, is a social worker and is now eager to join politics and get elected at local level. She described herself as very ambitious.

“I am ready for the election,” she said, promising to make it later on to the national level.

“To become successful, there is only one way,” WIP’s Laganne told women attending the training. “You have to learn, persevere and persevere… if not you’ll reach nowhere,” she emphasised.

Laganne, whose ambition is to become the first female prime minister of Mauritius, states clearly that the struggle is not between men and women but is rather a question of democracy.

As to why so few women are in politics, she rejects the idea that a lack of education is the cause, noting that there are many men who also have limited education. “Yet they become ministers and rule for years. They learn how to master the arts of politics. Why can’t we do the same?”

The WIP training is geared to providing women with the skills to flourish in politics through sessions on how to behave in front of an audience, preparing speeches, public speaking and how to lobby for tickets if they join a group or a political party.

“Learn to know your audience, first. This should help you prepare your speech and know the language you’ll speak. The most important of all is to get your message through,” Rachel Ng, the day’s trainer told the aspiring politicians.

At the Tamarin training, women came up one by one, to simulate how they would participate in a public meeting prior to an election campaign. Arjoon articulated the problems affecting the village and her priority goals of tackling issues of road safety and pollution if elected. Her mock speech was well received by the other participants who congratulated her on her choice of priority issues.

“Such issues affecting the family should work well for women,” claimed Rachel Ng.

Others failed to impress the audience, while some went out of context. “We help them with the right ammunition so that they can keep firing. Such things happen but they should keep on practicing at home,” said Ng.

Bruno Woomed, another member of WIP, calls on the women to try to seize all opportunities that are available to talk to people, to raise issues that affect them in their daily life. “This should help you overcome your fear. Try to keep your fear under control and you’ll forget about it,” he encouraged them.

But while these women were busy in training, the ruling Labour Party of Prime Minister Navin Ramgoolam announced the composition of its new political bureau of 34 members.

Only six of them are women and all occupy junior posts, a development the participants at the WIP training session found “disturbing and discouraging”.