CAIRO, May 2 2011 (IPS) - The collapse of autocratic regimes in Tunisia and Egypt has broken the state’s stranglehold on the local press, but journalists and bloggers must still be careful what they say. 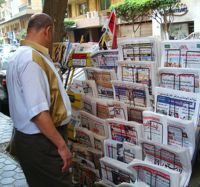 Not as much press freedom as many would like. Credit: Cam McGrath

“The red lines are very blurry at the moment,” says Rasha Abdulla, chair of the journalism and mass communications department at the American University in Cairo. “We’re in a transition period… and there is still no legislation to guarantee freedom of expression.”

Rights watchdogs have consistently rated the Middle East and North Africa region as one of the most stifling areas of the world for journalists to operate in.

Last year, Washington-based Freedom House ranked Tunisia ten spots from the bottom – lower than Somalia – in its annual ranking of press freedom around the world. Egypt, which ranked slightly higher at 130 out of 196 countries, saw an increase in legal intimidation against journalists and bloggers to the alarming rate of one lawsuit per day.

The democracy movements reverberating across the Arab world will no doubt force a radical reassessment of those rankings. Media institutions witnessed an abrupt and jarring change after mass demonstrations forced Egyptian president Hosni Mubarak and Tunisian president Zein Al-Abidine Ben Ali out of power on Jan. 14 and Feb. 11 respectively.

“Before Feb. 11, we had strict orders not to discuss certain topics, such as the Muslim Brotherhood or (Mubarak’s political opponent) Mohamed ElBaradei,” says Ashraf El-Leithy, deputy editor of Middle East News Agency (MENA), Egypt’s official news wire. “Now we have complete freedom to write about anything – without any restriction.”

He says many of MENA’s journalists and editors backed the revolution, but were afraid of losing their jobs if they strayed from the official line. With Mubarak gone and his ruling party dissolved, the news wire has gone “from being the voice of the government, to being a voice of the people.”

Arab dictators have traditionally relied heavily on state media to consolidate their rule. The government dominates the local airwaves and newsstands, putting its spin on news and commentary while drowning out dissenting voices. It also sponsors agents in the “independent” media, using well-placed producers, editors and talk show hosts to carry its message.

Meanwhile, dictators hide their transgressions and failures behind draconian media laws designed to intimidate, silence and wear down critical journalists. Those who speak out against the regime or its policies are subject to tedious lawsuits, heavy fines and prison terms.

“With a repressive climate there is no need for physical censorship – fear drives people to censor themselves,” says media expert Mahmoud Alam Eddin.

Analysts say the structural changes that followed the collapse of authoritarian regimes in Tunisia and Egypt have loosened the state’s grip on the press and opened the door to a wider range of independent media.

The interim government also replaced the board chairmen and chief editors in seven state-run newspapers and magazines – a move widely criticised as being purely cosmetic. While many journalists mutinied against the regime in its final hours, their abrupt shift from regime sycophants to revolution cheerleaders has brought their credibility into question.

“The people who work in these institutions are not used to freedom of expression, and many are just waiting to see who the new boss is,” Abdulla told IPS. “Sure they’re now attacking Mubarak just as fiercely as they used to applaud him, but with no professional standards.”

Rights groups have lauded the lifting of press restrictions in post-revolution Tunisia and Egypt, but warn that new red lines appear to be emerging. Media watchdog Reporters without Borders noted during its visit in February that while Internet censorship had officially ended, some online controls were still in place. In particular, blogs critical of the behaviour of Tunisia’s security forces remained blocked.

In April, an Egyptian military court sentenced a blogger to three years in jail for “insulting the military establishment” and “disseminating false information.”

In a blog post, Maikel Nabil denounced the military’s conduct since Egypt’s revolution began on Jan. 25, citing human rights reports on the army’s alleged use of violence and torture against citizens. In earlier writings, the 26-year-old blogger explained his decision to resist compulsory military service and called for others to do the same – a protest that may have influenced the tribunal’s judgment.

“The harsh sentence was intended to send a message that criticism of the army would not be tolerated,” says Adel Ramadan, one of Nabil’s defence lawyers.

In a letter sent to newspaper editors on Mar. 22, the Supreme Council of the Armed Forces (SCAF) warned that all coverage of topics involving Egypt’s military establishment must first be vetted by the SCAF’s public relations and intelligence directorates.

Rights advocates argue that the military lost its immunity from media criticism the minute it assumed control of the country.

“The rule that you cannot write anything about the military was in effect before the revolution,” Ramadan notes. “But now that the military is the government, people have the right to condemn its abuses of power.”

Media experts acknowledge the difficulty of dismantling the culture of information control after decades of authoritarian rule. The military – the most secretive and paranoid institution – can hardly be expected to set the bar.

The challenge will only grow as new media entities enter the arena, including platforms for previously suppressed political and ideological streams.

Experts anticipate a flood of private newspapers and television channels in Tunisia once archaic licensing procedures are relegated to the dustbin. Egypt, which already had a small but vibrant independent press, has dozens of new entrants. Among these are a television channel for the previously outlawed Muslim Brotherhood, and Radio Ta7rir, a youth-led online radio station that aired in March.

Ramadan applauds the growth of independent media, but says the real test is whether journalists and bloggers will be free to discuss issues and express their views without fear of recrimination.