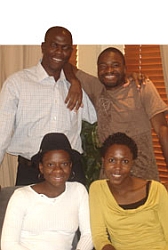 Addressing the plenary of the Second Africa-India Forum Summit in the Ethiopian capital, Singh offered a credit line of five billion dollars to African countries over the next three years, to help them achieve their development goals.

An additional 700 million dollars were pledged by Singh for building new institutions and devising training programmes on the continent, an Indian government website said. IAVU follows the huge success of the Pan-African e-Network Project, and Singh said the initiative would help spur demand in Africa for higher studies in Indian institutions.

“We further propose that 10,000 new scholarships under this proposed university will be available for African students after its establishment,” he said.

The Pan-African e-Network has already created satellite-linked infrastructure that has brought modern e-governance, distance education and tele-medicine services to scores of African states with support from Indian universities and top-notch hospitals.

Singh said that through the grant of scholarships, his government wanted to make education in India an “enriching experience” for students from Africa.

“We are substantially raising the number of scholarships and training slots for African students and experts, including under the Indian Technical and Economic Cooperation Programme,” he said.

India’s top Africa experts said there was method in Singh’s choice of strategies to engage Africa.

“Pretty obviously India cannot focus on areas like infrastructure, where China has distinct advantages, but India is an acknowledged power in information technology (IT) on which it can safely leverage its Africa strategy,” said H.H.S. Viswanathan, a former career diplomat who is now a distinguished fellow at the independent Organiser Research Foundation in New Delhi.

Viswanathan, who has served as Indian envoy to various African countries, told IPS that in the 1970s and 1980s a large number of Indian teachers and doctors went to African countries under government programmes, a fact not well-known today. “This is remembered gratefully by the present generation of African leaders,” he said.

Right from the first India-Africa Summit, held in New Delhi in 2008, there was focus on the human resource development sector, Vishwanthan said. “It is only logical to be consolidating this approach now.”

Singh announced plans to establish an India-Africa University for Life and Earth Sciences and an India- Africa Institute of Agriculture and Rural Development. An India-Africa Centre for Medium Range Weather Forecasting will harness satellite technology for the agriculture and fisheries sectors as well as contribute towards disaster preparedness and management of natural resources.

There will soon be an India-Africa Food Processing Cluster and an India-Africa Integrated Textiles, both of which will help create regional and export markets, according to Singh’s announcement.

India’s focus on training was already apparent at a trade ministers’ meet in Addis Ababa on May 21 that was designed to inform the summit three days later.

Earlier, Sanjay Kirloskar, chairman of the Africa Committee of the Confederation of Indian Industry (CII), which is taking a lead role at the Forum, said Indian companies were focusing on developing “job ready” manpower in Africa through skill development and capacity-building initiatives.

Kirloskar told IPS that training programmes run by Indian companies were “aligned with local business operations” so that “Africans can learn on the job and then run the projects by themselves.”

He said Indian companies have initiated educational and training programmes that address the broader needs of society through scholarships as well as entrepreneurship development programmes. “This is truly a South-South relationship,” he said.

An example would be the Indian conglomerate Tata, which has established major businesses in African countries that are involved in such diverse sectors as steel-making, automobiles, IT and telecom, and has several well acclaimed capacity-building programmes. Tata vice-president for new business initiatives Vikas Gadre told IPS his company found it practical and profitable to build large skilled manpower bases empowering African technical and managerial personnel to run Tata outfits.

“It is initiatives of this type that are winning applause both for Tata and for India from Africa’s leaders,” Gadre said.

Indian private sector entrepreneurs have by now invested over 25 billion dollars in sectors such as IT, farm equipment, automobiles and agriculture in several major African countries.