LAMPEDUSA, Italy, Jun 21 2011 (IPS) - It’s only a few hundred metres from the rocky hillside overlooking Lampedusa’s commercial port to the other side of the protected bay. For more than a decade this narrow strip of ocean has been a migratory gateway into Europe for tens of thousands of mostly African migrants. The numbers have risen and fallen in response to shifting government policies and geopolitical developments. 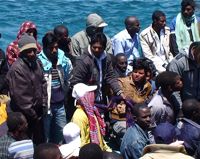 In terms of Lampedusa’s wider political impact on Europe however, no previous influx has had the same potentially momentous consequences as the 26,000 Tunisians who converged on the island earlier this year.

The spectacularly inept response of Prime Minister Silvio Berlusconi’s government to these arrivals transformed Lampedusa into the symbol of a nightmare scenario that has obsessed Europe for more than two decades – of an uncontrollable surge of impoverished Third World migrants pouring across the continent.

Italian politicians and the media did much to fan these anxieties with melodramatic descriptions of an ‘invasion’ and ‘assault’ on the island by undocumented migrants, and these siege narratives were echoed in the European media. Even the more reserved BBC entitled a recent documentary ‘The Invasion of Lampedusa’.

The European far-right depicted the island in very similar terms for its own purposes. On Mar. 15, Marine Le Pen visited the island on the eve of French local elections with the anti-immigrant Northern League member of the European Parliament (MEP) Mario Borghezio. Last month Roberto Fiore, head of the neo-fascist Forza Nuova party accompanied Nick Griffin of the British National Party to the island in another demonstration of far-right ‘solidarity’.

This assistance was not necessarily welcomed or desired by the islanders themselves. From a distance Lampedusa is often presented as a vulnerable bastion against Europe’s unwanted migrants, but many of its inhabitants are surprisingly relaxed about their situation.

Outside the Café Mediterraneo on Lampedusa’s main drag, a flag of the European Union with a question mark still remains from its transformation into what the café’s owner Silvana calls a ‘Tunisian city’ earlier this year.

Silvana has good memories of the Tunisians who more than doubled the local population for two weeks. “They were good to us, and Lampedusan people were good to them,” she says. Like many Lampedusans, she is more critical of the paralysis of her own government and the EU during the crisis than she is of the migrants who came to the island.

For many Lampedusans, this influx came as a shock, after years in which migrants were swiftly moved to the holding centres and transported off the island without many locals even being aware of their presence. Berlusconi’s initial refusal to open the two holding centres brought many Lampedusans face to face with migrants for the first time, and their instinctive response was often more generous than that of their own government.

With the migrants receiving little assistance except from the Red Cross, and the survival kits provided by Médecins sans Frontières, the church and other local institutions gave them food, clothing and blankets. Some restaurants gave them free food, and electricity to charge their phones.

One schoolteacher took his pupils to meet the migrants for cultural exchanges. The Associazione Askavusa (Barefoot Association), a local cultural organisation, cooked 100 meals a day with money from its members’ own pockets, or local donations.

The association celebrates Lampedusa’s role as a migratory destination and organises an annual film and video festival dedicated to migration. It is also trying to create Europe’s first museum of migration, using lifejackets, found objects, letters and clothes retrieved from the beaches where migrants have landed.

“They saw numbers, and we saw people,” Jiacomo Sferlazzo, one of its members, tells IPS, asked why the islanders’ perception is so different from that of the government.

Not everybody sees things this way. Lampedusa is a contradictory place. Its longstanding mayor Bernardino de Rubeis belongs to a local centre-right party and his deputy mayor is a senator with the Northern League. At one demonstration in March a group of local people shouted at the Coastguard not to bring migrants to the island. But this was clearly not the dominant response.

Today photographs of the Tunisians greet visitors to the tiny airport, and the local tourist magazine celebrates ‘solidarietà lampedusana’ – Lampedusan solidarity. Many Lampedusans are more concerned with the fall in hotel reservations than they are with the migrants who still come to the island.

“Many tourists are scared of this problem,” says Jiacomo, a worker at the Baia Turchese hotel overlooking the port. Was he scared? “No. Lampedusans and Africans get on fine together. Many of the people who come here are young like us.”

The presence of soldiers, police and carabinieri has compensated some hotels for the loss in trade. Vanloads of police with riot shields are a constant presence on the island, but most of them are there on temporary contracts that can be cancelled at short notice, and pay less than tourist rates. No one blamed migrants for this situation, and many attributed the fall in bookings to inaccurate and exaggerated media reporting.

To some extent both Lampedusans and migrants have become counters in the political posturing between Italy and France that followed the arrival of the Tunisians. For the scandal-prone Berlusconi, Lampedusa has been a distraction from mounting political pressure. For French President Nicolas Sarkozy, the decision to stop Tunisians entering France was intended to take the wind out of the resurgent Marine Le Pen’s sails.

Both governments eventually resolved this conflict by calling on the EU to revisit one of the cornerstones of European integration – free movement of people within the Schengen Area. To its great discredit, the European Commission capitulated to this cynical politicking and agreed to reintroduce border controls in certain emergency situations.

As a result this tiny island of 20 square kilometres has cast another question mark over the European project, but these developments say more about the governments who agreed to them, than they do about an ‘immigration tsunami’ that remains conspicuously absent on Lampedusa itself.