NASHVILLE, Tennessee, USA, Jun 9 2011 - Living on the streets is not easy for anyone, but for gay teenagers it can be even worse. Many suffer rejection from their families – pushing them to homelessness – discrimination at school and even sexual assault on the streets. The Oasis Center, in Nashville, Tennessee, is gathering efforts to combat prejudice and provide a safe space for LGBTQ young people. 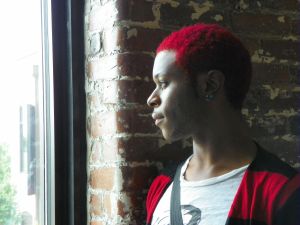 Eljen is a resident of an Oasis Center transitional living facility for 18 to 21-year-olds who currently have no permanent housing. Credit: Courtesy of Oasis Center

For weeks, a teenage girl living with her grandmother has been grappling over the decision to come out of the closet. The best-case scenario is that her grandmother will disapprove of her sexuality, but will continue to provide loving support. The worst-case scenario? The girl will end up homeless, living on the streets of Nashville.

This predicament isn’t uncommon among lesbian, gay, bisexual, transgendered and queer or questioning (LGBTQ) youth. Recently, the National Alliance to End Homelessness reported that while gay and transgendered youth make up approximately five to 10 percent of the entire youth population, more than 20 percent of homeless youth identify as such. In some locations, LGBTQ youth comprise as much as 40 percent of the homeless youth population.

Staggering statistics such as these lead many to believe that identifying among the LGBTQ demographic puts an alarming number of young people on the streets. According to Pam Sheffer, a full-time volunteer at Nashville’s Oasis Center, the LGBTQ students she works with fall in line with these statistics.

Unfortunately, until last summer, Nashville didn’t have many resources specifically designed to help LGBTQ teens. While the Oasis Center has more than 40 years’ experience serving troubled – and sometimes homeless or transitioning – youth, the organisation has only recently developed programmes for this demographic.

Sheffer, who was employed in the corporate insurance industry until last year, has helped create and support programmes that reach out to this demographic. While searching for a volunteer opportunity to help fulfill her passion of reaching out to gay young people, she stumbled upon the Oasis Center. Before long, she had postponed her career and signed up as a full-time volunteer.

“I’ve always had a passion for working with LGBT youth, and my day job just wasn’t cutting it after a while,” she explains. “Identifying as homosexual or transgender can be a very delicate process, and I felt compelled to help young people deal with that. I fell in love with what the Oasis Center has to offer and I wanted to be a part of that, too.”

Sheffer intentionally asks LGBT youth what they need and what type of programmes they would like to attend. So far, her strategy is working: about four kids showed up to the first event hosted by the Oasis Center; by the third event, more than 20 young people were in attendance.

“We’ve now organised consistent programming with set days and times,” Sheffer says. “That gives young people a therapeutic opportunity to speak their truth to an audience that can relate and assist.”

The programme – now called ‘Just Us’ by the teens who participate in it – also offers educational opportunities about LGBT history, including gay and transgender people who have made a significant difference in the world. Sheffer also discusses the laws that affect gay people, and how to cope with the fact that finding a job – or even housing – can be more difficult for homosexuals in some areas of the country.

“It’s not about making them feel down or overwhelmed; it’s about giving them hope that they can be successful citizens in a community,” she says.

Sheffer also organises special events like “The Closet: It’s not for clothes anymore”, which focused on the emotional intricacies of identifying oneself as gay or transgender. Last fall, she hosted a five-hour summit, where gay youth completed an anonymous survey about their wants and desires. As a result, she and Oasis Center staff are quickly learning what kind of programmes helps this demographic – and what drives them away.

“Through those surveys, we learned that the kids actually don’t want to label themselves,” Sheffer says. “They feel that labeling just opens them up to more discrimination. Knowing that kind of thing helps us create more effective programming.”

In fact, the Oasis Center has been able to identify the top four needs of gay adolescents. Most of all, participants in the programme are seeking gay or transgender adult mentors who can help them transition through the coming out process. Additionally, they desire an accepting and loving family, social justice opportunities and a safe school environment.

While the streets aren’t kind to anyone, the challenges experienced by homeless youth are especially harsh for those who identify as gay or transgender. For example, a study by the University of Nebraska-Lincoln Department of Sociology reports that 33 percent of straight homeless youth have been sexually assaulted, compared to 58 percent of homeless gay and transgender youth. Forty-four percent of LGBT youth have been sexually abused by their adult caretakers, while only 22 percent of straight youth have similar encounters.

While the climate on the streets is dangerous for homosexuals, LGBT adolescents who are not accepted at home face a host of difficult challenges, as well. A study by Dr. Caitlin Ryan and her team from the Family Acceptance Project reveals the social ills that can plague LGBT youth who aren’t well-received by their family.

“This study clearly shows the tremendous harm of family rejection, even if parents think they are well-intentioned, following deeply held beliefs or even protecting their children,” stated Dr. Sten Vermund, a pediatrician and Amos Christie Chair of Global Health at Vanderbilt University. “In today’s often hostile climate for LGBT youth, it is especially important to note that both mental health issues like depression and suicide and HIV risk behaviours were greatly increased by rejection.”

Armed with these statistics, the Oasis Center staff is working to keep kids off the streets.

“We’re trying to become case workers in some ways, so we can assess where these kids are at home, at school, and in church, and then identify where we can help them circumvent their problems,” Sheffer says. “If we identify that there is abuse going on, then we can step in. If someone just needs a peer group, we can offer that. If it’s counseling that they seek, we’ve got that covered. In the end, we hope to prevent homelessness.”

Although Ms. Sheffer and Oasis Center staff have served more than 40 LGBTQ youth in the past year, the centre hasn’t received any formal funding to start an official programme. For the past 12 months, they have worked to demonstrate the need for programming that serves the gay and transgender youth population in Nashville-and the Oasis Center’s ability to sustain it.

“There are national organisations that fund gay youth programs, but you have to display a track record to get that off the ground,” Sheffer explains. “(We’ve done) a lot of youth engagement and preventative work to funnel money into the program. The Oasis Center has been doing this for 40 years, and they know how to tap into these resources. If we can get this programme started, we believe we can sustain it.”