KAMPALA, Jul 8 2011 (IPS) - When Valente Inziku’s wife, Jennifer Anguko, went into labour they had decided she would go to the local referral hospital just to ensure a safe delivery. 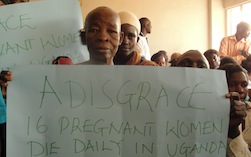 An elderly woman holds up a poster at the Constitutional Court where the maternal health case was postponed. Credit: Rosebell Kagumire/IPS

But Anguko bled to death because nurses and doctors could not be bothered to treat her. Her unborn child died as well.

“We attended antenatal clinics and each time they advised us to be near the health center when the delivery time comes. We did just as we were told and when we arrived the services were not provided,” Inziku said.

He had arrived at the hospital after his wife did and found her bleeding. “All the nurses were telling me was I had to clean the blood myself. I had my sister so we cleaned the blood,” said Inziku. “It was purely negligence of the nurses I kept calling them and they would tell us it is not yet the time for her to deliver the baby.”

So Inziku and his sister literally sat down holding his wife as she bled to death. “She died in my arms. She told me: ‘We have children, we have love but all this seems nothing if we have no help.’” Inziku said.

Inziku says the only doctor appeared 12 hours after his wife was admitted. “When the doctor finally arrived he told me it was too late and he asked why the nurses had called him,” Inziku said.

Inziku, a primary school teacher, is now left to look after their three children, all under the age of 10, alone.

Inziku is part of a group that has petitioned the Uganda Constitution Court to pronounce the escalating maternal deaths in Uganda violates the Constitutional rights of Ugandans.

The case was brought to court in March by the Centre for Health, Human Rights and Development together with three individuals: Professor Ben Twinomugisha, a lecturer at Makerere University; and two health activists, Rodah Kukkiriza and Inziku.

They want government to address maternal mortality and compensate the families that have lost mothers to negligence or poor services.

In the petition, the activists argue that by not providing the essential services for pregnant women, and many others, the government of Uganda is in violation of the fundamental obligation of the country to uphold the Constitution and defend, protect and promote the right to health and the right to life.

“I am here today because I want the court to know there’s an injustice going on. I have pain in my heart,” said Inziku.

The court was scheduled to hear the petition on Jul. 7 but the case was postponed because they did not have the required quorum of five judges.

Noor Nakibuuka Musisi, the programme coordinator at Centre for Health Human Rights and Development said securing a court declaration would be a great start in getting government to act.

“We want a declaration that the non-provision of essential services in the government facilities is a violation of the right to life,” she said. “The reason many women die is because there are no maternal kits, there’s no blood in hospitals and we have poorly paid health workers not behaving in the most ethical way.”

In June the Ugandan government announced an increase in the health budget for the 2011/12 financial year. It increased from 270 million dollars to 412 million this year.

However, Francis Runumi, the commissioner of health services and planning at the ministry of health said most of the budget was going to infrastructure and would not address the human resource crisis that has contributed to maternal mortality figures.

Still activists question the political commitment and health sector accountability. Recently government spent 760 million dollars on fighter jets and other defense equipment, which many question as a priority for Ugandans.

Robinah Kaitiritimba, the executive director of the Uganda National Health Consumers Organisation, part of the coalition that brought the case to court, said Ugandans must fight for their rights.

“There are no rights which are given on a silver platter, we must continue to fight and ensure our government responds to the cries of mothers and families.”

Maternal death in Uganda has remained high over years, every day at least 16 women die in childbirth. Uganda’s maternal mortality figures are at 435 deaths of every 100,000 live births, which translate to 6,000 deaths annually. Also child mortality remains high with infant mortality rate at 78 per 1000 births.

The gap in access to life-saving HIV treatment and malaria prevention and treatment are also major causes of maternal deaths.