TIANJIN, Aug 2 2011 (IPS) - When the old Astor Hotel reopened to great fanfare from the local city fathers here in 2010, it marked more the return of the “Grande Dame of Tianjin” to the city’s growing collection of luxury hotels. It was a travel back to the future. It manifested the city leaders’ eagerness to embrace and rebrand the colonial heritage as a way of boosting Tianjin’s modern identity. 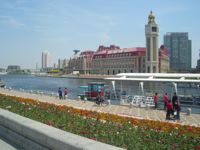 The past is rebuilt on the riverbank at Tianjin. Credit: Antoaneta Becker/IPS.

An epitome of colonial history, the old Astor had always been a bit of a sore for the communist rulers of this industrial outpost, some 110 km east of capital Beijing. Resentful of the city’s history as an early port forced open by foreign powers in the 1860s, generations of city fathers had preferred to let landmark old buildings like the Astor fall into disrepair, or be altered beyond recognition by their new inhabitants.

But Tianjin’s former mayor Dai Xianglong had a vision. When he assumed leadership of the city in 2003 he brought along the pragmatism and the skills learned during his post as a governor of the central People’s Bank of China. He saw the potential of the city’s colonial past as a magnet for tourism revenues and economic capital to even the race with fast-developing Beijing nearby. Through his links with the central leadership he also brought the investment needed to give Tianjin a makeover.

“There was a turn in the historical discourse, which saw Tianjin no longer presented as a victim of foreign humiliation,” says Chen Song-Chuan, who researches Tianjin’s history at the University of Bristol, the United Kingdom. “The money was coming in and they had to resolve the conundrum of Tianjin’s conflicting identity. Tianjin no longer wanted to be seen as a backwater in Beijing’s shadow. The city decided to delve into its history to reinforce its local identity.”

Set up by a British Methodist missionary in 1863, the hotel gradually became the prime venue for all diplomatic and social activity in Tianjin. The last Chinese emperor Pu Yi and empress Wan Rong used to dance in the hotel’s ballroom. The father of China’s republic, Dr. Sun Yat-sen, presided over the country from the Astor for some time.

When the old Astor reopened after substantial renovation last year, it premiered a little museum to the hotel’s history, which calibrates much of Tianjin’s turbulent past. Between 1860 and 1945, Tianjin was the site of nine national concession areas granted to foreign powers in the wake of China’s defeat in the Second Opium War in 1860. Though treaty ports were effective in creating trade with China, the privileges and extracted concessions given to foreigners bred resentment towards western imperialism.

But the Astor museum eschews the typical approach of presenting the colonial past as national shame. Tianjin’s colonial legacy is rebranded and flaunted as a unique feature of the city’s history.

Menus on display list the gourmet experiences that hotel guests, both Chinese and foreign, used to indulge in. Chinese warlords who owned villas in the foreign concessions, and western luminaries get equal attention in the array of life-size paintings and memorabilia. A whole corner is devoted to the exploits of Hebert Hoover, later 31st president of the U.S., a regular patron of the hotel and Mandarin speaker who after his stint as an engineer at the Kaiping mines of Tianjin allegedly left China fabulously rich.

Outside the hotel gates, an array of stately buildings line the banks of the Hai River. Some resemble Bavarian castles; others bear faint resemblance to the Houses of Parliament in London. When asked about them, taxi driver Liu who awaits customers in front, shrugs and says: “They are all new. From the Dai (Xianglong)’s era.”

Under Dai’s rule, the city’s former foreign concessions were renamed Italian or German style “scenic neighbourhoods”. Their foreign character was deliberately emphasised but also claimed as part of the city’s “Chinese heritage”. Expansive plans for redevelopment of the areas where former colonial powers once held court were re-directed towards sprucing up the colonial architectural legacy.

The enthusiasm to capitalise on the past went as far as to attempt to replicate many of the old originals. Tianjin’s streets were dotted with facades ranging from the neo-classical to the Art Deco. This drive continues even today though the city has a new mayor and an established reputation as the only city in Asia with more than 800 Western-style villas.

The results have left some China experts critical. “In the end, the main objective of such ‘urban regeneration’ is the creation of upmarket commercial precincts: scenic spots with a ‘historic’ flavour that are primarily comprised of hotels, bars, restaurants etc…” notes Italian researcher Maurizio Marinelli in a piece on Tianjin published in the China Heritage Quarterly. He deplores the triumph of consumerism over true preservation and the livelihoods of thousands of families that had been relocated to allow for the city’s beautification.