NEW DELHI, Aug 24 2011 (IPS) - If India’s powerful central government that rules over the destinies of 1.2 billion people quails before a slight 74-year-old man, it is because he is armed with a weapon that has rarely failed in this country – extreme renunciation through a fast-unto-death. 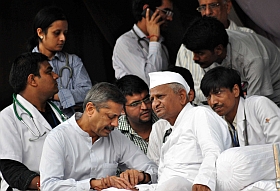 The present exponent Anna Hazare is not only using the fasting weapon to the hilt but also twisting it with a finesse that has brought a reluctant government to the negotiating table to discuss legislation for an ombudsman capable of ensuring accountable governance.

On Tuesday, with a team of doctors announcing rapid deterioration in Hazare’s condition after eight days of fasting, Prime Minister Manmohan Singh personally offered to negotiate changes to the contentious Lokpal (ombudsman) Bill that awaits passage in Parliament.

That was Hazare’s moment. He waved away the doctors, led by Delhi’s best-known cardiologist, Naresh Trehan, and told the 10,000-strong crowd gathered around him that he was ready to give up his life to fight corruption that he blames for continuing poverty in a resource-rich country.

“His condition is critical. His pulse rate is high as also the ketone (body chemicals that can damage the kidneys) levels in his blood. He needs to be hospitalised,” said Trehan, speaking from the dais at the Ramlila Grounds, the venue of the fast.

Hazare, frail and clad in white, responded to Trehan’s warnings by announcing to the anxiously waiting crowds: “I have already given my heart to the country, what are my kidneys?

“Nothing will happen to me, for I draw energy from all of you. Anyway, I am sure that there will be many among you who can spare me a kidney.”

To roars of approval from the legions of his supporters, Hazare said his inner voice told him not to be afraid of death and refuse intravenous drips or medication of any type.

“This is one of those timeless moments in the life of a people,” commented Abhijit Pathak, a professor of sociology at the capital’s Jawaharlal Nehru University, who had come to the Ramlila Grounds to soak it all in personally, rather than watch on television.

“What Anna Hazare is enacting has been played out countless times and reinforces an archetype that is embedded in the collective consciousness of Indians. It reinforces their myths, epics and the great stories of sacrifice, suffering and emancipation,” Pathak told IPS.

Pathak said the original aim of Hazare’s fast, to compel Parliament to accept an ombudsman capable of monitoring the judiciary and the prime minister’s office, had now receded in significance.

“What is important is the spectacle of a man, revered for his honesty and reputation for public service, about to sacrifice his life for a just and popular cause,” said Pathak. “The fact that his life is now in real danger, as attested to by specialist doctors, only adds to the powerful symbolism.”

“Who cares about the commas and hyphens on the Lokpal Bill? The government should first ensure that Anna Hazare’s life is safe. If he dies there will be chaos,” said Ram Jethmalani, an eminent lawyer and legislator who has served as minister in several cabinets.

Jethmalani said the Hazare phenomenon was being fed by the public perception that the government, despite a series of scams involving billions of dollars, was not serious about curbing corruption in high places.

“Anna Hazare has captured the imagination of the Indian public in a way that no one has since the days of Mahatma Gandhi and that is why there is hope now for the Lokpal Bill, pending passage in Parliament for 40 years,” said Vineet Narain, a leading civil society campaigner against corruption.

“Like Gandhi, Hazare is succeeding in his objectives where others failed because of a disregard for his own comfort and safety. Only Hazare had the moral stature and courage to sit on a life-threatening fast,” said Narain, known for securing important Supreme Court rulings against corruption.

What is also common to both Gandhi and Hazare is that they believed that fasting works best as a tool for ‘satyagraha’ (protest with a desire for truth).

Doctors say that the danger to Hazare’s kidneys is real, especially since he has refused medical support.

“As the body is deprived of carbohydrates it begins to burn proteins and fats which release nitrogen compounds and ketones respectively and these can damage the liver and kidney,” said Dr. K.K. Aggarwal, a leading city physician and public health activist.

Several of India’s prominent politicians have suffered permanent damage to their kidneys as a result of fasting for public causes, one of them being former prime minister Vishwanath Pratap Singh.

“Extreme fasting is a part of yogic practices and is believed to draw upon hidden reserves of spiritual energy, but these should never be attempted by novices,” Aggarwal told IPS.

Gandhi who sat on several fasts to promote non-violence and communal harmony in pre-independent India, thought the practice helped exert control over mind, body and spirit.

Fasting as a spiritually cleansing exercise is not limited to Hinduism or India. The Islamic world observes Ramadan as a month of fasting through the day, and many Christians observe Lent with varying levels of abstinence.

“India’s case is different in that fasting is used to move an intransigent ruler or government. Also, Anna Hazare is tapping into the huge symbolic value of renouncing food in a country that sets great store by abstinence of all types, starting with vegetarianism,” said Pathak.

Pathak pointed out that contemporary India is beset by a million mutinies, including armed Maoist insurgency that has gripped several central and eastern states.

“But where all of these rebellions have failed or dragged on for years, Anna Hazare has almost overnight captured the imagination of large numbers through ascetic appeal and he is now calling the shots on the Lokpal Bill,” Pathak said.