DR CONGO: No Water, No Management, No Power

KINSHASA, Sep 21 2011 (IPS) - Frequent power cuts have led to the firing of the board of the Democratic Republic of Congo’s national electricity company. But it is not clear if sub-par generation from the Inga hydroelectric power stations supplying the capital Kinshasa is due to poor management or to unusually low water levels in the Congo River. 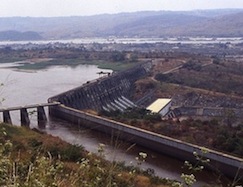 Inga I generating station, with the channel leading to Inga II in the foreground. Credit: AlainDG/Wikicommons

The two power plants – Inga I and II, located on the river some 300 kilometres upstream of the capital – have a combined potential output of 1,775 megawatts, but in recent years due to maintenance problems and delayed renovations they have produced around 800 MW.

However, the generating stations are presently putting out only 300 MW, hugely insufficient to meet demand. This explains the frequent power outages experienced by domestic and commercial consumers alike which led to the suspension of SNEL’s board by President Joseph Kabila in late August.

“We are victims,” protests Mbuyi Tshimpanga, director of the Inga hydroelectric power station. According to him, water levels are low due to poor rains in parts of the river’s four million square kilometre basin.

Tshimpanga says the river’s low water level has led to a reduction in electricity output from the Inga turbines, with serious consequences for supply not only to Kinshasa but to the provinces of Bas-Congo in the west and Katanga in the southwest.

The situation, he stresses, underscores the need to import between 50 and 120 MW from Zambia’s electricity network to reduce the deficit in Katanga province, which shares a border with DRC’s southern neighbour.

Albert Landu, coordinator of the non-governmental organisation “Cause Verte”, based in Matadi, Bas- Congo, confirms that water levels are extraordinarily low, with serious implications for river ecosystems. “We have never experienced such a tragedy,” he says. “We fear heavy damage to fish stocks in our province.”

“The directors of SNEL have tried, day and night, to do everything possible to avoid a total black-out,” said Jean-Thomas Lokala, the utility’s outgoing technical director, adding that “The situation is serious without being chaotic…”

But SNEL’s argument that the power cuts are due to low water levels leaves some observers unconvinced. They say the Inga’s production problems are due to poor management, especially of the canal that guides water from the Congo’s main channel through the turbines, which has not been dredged for nearly three years.

“This canal receives 257.4 tonnes of sediment (sand, mud and gravel) per hour,” explains Henri Kimbanzi, director of Inga I, “that works out to 6,177.6 tonnes per day. Only 50 percent (of this sediment) is sucked up by machines or trapped by diversion dykes, while the rest is deposited in the channel.”

A dredge was purchased in 2007 for nearly four million dollars by SNEL from a Belgium-based company, Marine Trading Engineering. But it has not yet been installed following a misunderstanding between the company and SNEL; an editorial in the Congolese daily “L’Avenir” noted that the ten percent commission on the purchase was long ago paid out to members of the previous board.

The outgoing technical director for SNEL has rejected the criticism of the site’s management as unfounded. But during a media tour of the dam site in August, IPS noted that the company was busy clearing material from the channel using cutter-suction dredges, which loosen sediment before sucking it up through a pipeline for disposal.

“The consequences of a general failure of the electricity supply to Kinshasa while waiting for the return of the rains should be carefully managed,” says Eugène Bitongwa, owner of a bar in the city’s Bandalungwa neighbourhood. If they are not, he says, the economy will suffer a major blow and the tensions that arise could be difficult to control.

Reacting to the suspension of SNEL’s board, Atundu Liongo, the leader of the government-aligned Convention des Democrates pour la République party said, “The decision taken by the head of state is a wise one. Yengo (the outgoing director general of SNEL) lacked imagination and determination.”

In a televised debate on Aug. 22, Triphon Kin Kiey, a member of parliament belonging to the ruling party, said that SNEL has been operating without proper future projections. “There exist in this country people who spend money for fun, yet never pay a single water bill or electricity. This is bad governance.”

But Steve Mbikayi, head of the opposition Workers’ Party, said: “The government is responsible for everything that it has condemned at SNEL. The failure of SNEL is a failure of the government, which has named water and electricity as one of the key development priorities of the Republic.”