LUSAKA, Sep 19 2011 (IPS) - As Zambians go to the polls on Tuesday to elect a new government and president they do so amid fears of election violence. 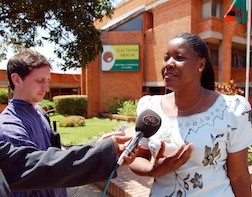 The country’s police, the Electoral Commission of Zambia (ECZ), civil society and observer missions have all expressed concerns of possible violence that could be triggered by the refusal of losing parties or candidates to concede defeat. However, until now the pre-election campaigns have been largely peaceful.

President Rupiah Banda has said that he and his ruling Movement for Multiparty Democracy (MMD) will accept the results.

“I can only speak for myself and my party when I say that we will abide by the results,” said Banda in a national address on Sunday. “I hope that all the other parties contesting the elections will also pledge to abide by the final results. My main concern in the remaining time is that all candidates, all parties and all supporters conduct themselves within the laws of our land.”

Banda added that he hoped the rumours of post election violence were merely that, but he warned that police would exert the full force of the law on those who perpetrated violence or intimidation.

“I have this message for you: I have ordered the police to arrest and prosecute all those who offend. Expect no mercy, expect no favour, and expect only the full force of the law to come down on you.”

On Monday, hours before the 6,456 polling stations across the Southern African country were set to open, the ECZ held a meeting with the presidential candidates to remind them of the rules of the elections.

ECZ spokesperson Cris Akufuna called for peace during and after the elections, adding that the commission hoped to announce the results within 48 hours.

Akufuna added that there was no room to manipulate the election results. He said the ECZ had “put in place a transparent system where there will not be any space or chance for anyone to manipulate.”

He explained that after the votes were counted, polling agents from the various political parties would be able to sign off the results.

“Having signed off the results, the results will be pasted on the notice board outside the polling station and each one of the monitors present will be given a copy of the results.

“Having done that, one of the polling agents will accompany the presiding officer and security officer to the collation centre to deliver the results sheet,” said Akufuna.

But in a move viewed as confrontational, the opposition Patriotic Front (PF) has encouraged its supporters to stay at polling stations after casting their votes.

Addressing a rally in Lusaka, Sata said this was to help guard against possible rigging. He even encouraged his supporters to sleep at polling stations, where necessary.

Despite being out of active politics for a while now, former Zambian President Kenneth Kaunda has been very vocal ahead of the elections.

He has been campaigning for political parties and their supporters to uphold peace before, during and after the elections. Kaunda, who became Zambia’s first president in 1964, currently features in a number of radio, television and print adverts by the ECZ.

One advert reads: “Campaign peacefully, do not intimidate. Allow voters to vote for the candidates of their choice on Sep. 20, play your part to ensure that this year’s elections are peaceful.”

Zambian police have even gone so far as to temporarily ban the sale of axes, hoes, machetes, catapults and other small weapons that could be used to perpetrate violence. The police have also banned the sale of alcohol by street vendors, especially a highly-toxic drink popularly known as Tujilijili.

Tujilijili is brandy and gin, sold in 30ml and 60ml sachets, which has an alcohol content of 45 percent. It is manufactured illegally in Lusaka, and is normally sold on streets and in public places like markets and bus ranks for as little as 20 cents.

On Friday the Inspector General of Police, Francis Kabonde, ordered all Tujilijili traders to stop selling the alcoholic drink.

Kabonde said: “The Zambian police will be out on the street to make sure that all those that might break the law are arrested regardless of who they may be.”

The national brewery, Zambia Breweries, has also done its bit to curb election violence and announced it was restricting the sale of its alcoholic beverages on election day and the days that follow in order to minimise consumption. The company did not explain how this restriction would be implemented.

But most people have bought beer in large quantities ahead of Tuesday’s elections.

Churches and faith-based organisations have also called for peace during this year’s elections.

The Reformed Church in Zambia’s Reverend Madalitso Banda warned against “false prophets” who may want to bring confusion.

Even international observers monitoring the elections have called for peace. The chairperson of the Commonwealth Observer Group and former Nigerian president, Yakubu Gowon, urged parties “to ensure that their followers do not engage in violence before, during and after elections.”

The European Union Election Observer Mission in Zambia also reported that the its Chief Observer Maria Muñiz De Urquiza, a Member of the European Parliament (Spain), would hold a series of discussions with stakeholders in the run up to the polls.