LUSAKA, Sep 20 2011 (IPS) - Only two incidents of violence, triggered by the late start of voting and the suspicion of electoral fraud, were reported as Zambians went to the polls to elect a new president and government on Tuesday. 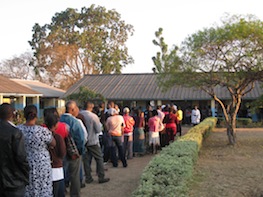 Zambians went to the polls to elect a new president and government on Tuesday. Credit: Lwanga Mwilu/IPS

The nationwide violence expected and feared by many did not occur as citizens spent Monday stocking up on basic commodities.

The Electoral Commission of Zambia (ECZ) has dismissed reports of electoral fraud and extended voting hours at all polling stations affected by the late commencement.

In a live broadcast on local radio Q-FM, ECZ public relations manager Chris Akufuna announced that all voting will be extended at these polling stations.

Some polling stations did not open at 6am as planned as voting materials had not been delivered. In Kanyama and Lilanda East in Lusaka the late commencement of voting triggered violence. When ballot papers were finally delivered, some irate voters tore them and set them alight claiming that they were pre-marked in favour of a particular candidate.

The situation in both areas degenerated when some citizens became riotous. At the Lilanda Basic School polling station in Lilanda compound, vehicles were stoned and one was set ablaze.

At Nakatindi polling station in Kanyama compound, voting had not started by midday and infuriated citizens ran riot as they suspected the ballots were pre-marked and they vandalised the voting area. Akufuna described the violence as unfortunate and denied suggestions that it was due to a lack of preparedness on the commission’s part.

“The ECZ was very prepared for these elections and the situation of the late delivery of materials in Lusaka is just disappointing … Our instructions were that all materials be in polling stations yesterday. As a commission, we will ultimately take responsibility for these disruptions but we tried our best to ensure the best scenario,” he said.

A number of reports of pre-marked ballots have emerged in different parts of the country but Akufuna dismissed all these allegations of electoral fraud.

“That is just a report. It does not arise because all ballot papers were physically inspected and none were pre-marked. These reports are probably emanating from people who wish us ill. Yes we have had challenges and we are dealing with them but fraud is not one of them,” Akufuna said.

As the clock ticked towards the opening of polling stations for Zambia’s tripartite elections, the fears of Zambians became evident on Monday.

Scores of people rushed to supermarkets to buy basic commodities, fearing that the situation could deteriorate after the elections.

“I am just trying to be on the safe side, people are circulating all sorts of rumours about what may happen after the election. I have bought enough food for my family for the next few weeks, just in case we experience what happened in Zimbabwe (after the 2008 elections), where they stayed for more than a month waiting for results, and during that time there was a lot of violence.

“Schools have not closed, but I will not take my children to school until after we are sure the situation has calmed down,” said Kaywala Chibwe, one of the many shoppers who filled up their trolleys at a Lusaka supermarket.

Some supermarkets even struggled to supply enough trolleys for their customers.

Meanwhile, the country’s only female presidential candidate, Edith Nawakwi of the Forum for Democracy and Development (FDD), called for peace ahead of Tuesday’s vote.

“We need peace, we need stability and we need our people to start thinking about creating wealth at household level,” said Nawakwi.

“Zambia is the heart of central Africa. Anything that goes wrong here during or after the elections will affect our brothers and sisters in the region. Zambians must understand that in the region, everybody is busy with a development agenda; no one in Southern Africa wants to start dealing with a horde of refugees that arise out of post-election conflict.” She said she hoped her participation in the elections was a uniting factor for Zambians. “I pray that my fellow Zambian women will realise that women have a much larger role to play in this election and that role is to keep peace in the homes, in the streets, we must pray and urge our members, our children not to involve themselves in violence,” Nawakwi said.

“I am appealing that…after the elections, people must conduct themselves in a manner that will ensure that there is peace and stability for all citizens,” said presidential candidate Dr. Fred Mtesa of the Zambians for Empowerment and Development.

United party for National Development presidential candidate Hakainde Hichilema said: “We have done enough work and the rest is for the people for Zambia to decide what they want, what sort of life they want. We have given the message.”