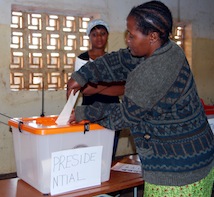 Zambians went to the polls on Sep. 20 and elected a new president. Credit: Ephraim Nsingo/IPS

Sata’s victory brings an end to the 20-year rule of the Movement for Multiparty Democracy (MMD), where he was formerly a national secretary before breaking away. This was Sata’s fourth attempt at the presidency.

Reuben Lifuka, president of Transparency International Zambia, an international civil society movement with an exclusive focus on corruption, told IPS that Sata’s and the Patriotic Front’s (PF) victory showed political players that they should not be complacent.

“This election has changed the political landscape,” said Lifuka.

He said that when the MMD first came to power in the 1990s their focus had been on service delivery.

Sata, 74, was declared winner of the country’s Sep. 20 general elections with 43 percent of the vote in the early hours of Friday morning after he beat nine other presidential candidates. Chairperson of the Electoral Commission of Zambia (ECZ) Justice Irene Mambilima announced the results though votes from seven remaining constituencies had yet to be counted. Sata garnered 1,150,045 votes.

His closest rival, President Rupiah Banda Banda of the MMD, took 36.1 percent of the total votes. Hakainde Hichilema of the United Party for National Development came third with 18.5 percent.

The other seven candidates shared the remainder.

Sata was quoted in Zambia’s The Post newspaper as saying that Mambilima woke him up early Friday with news of his victory.

“This is the beginning of the long journey and where we are going, it is not easy. It has not been easy because this result should have been declared two days earlier,” he told the newspaper. The PF claimed that the results had not been announced sooner because the MMD had tried to change them, a charge Banda denied.

Making his maiden speech as president on Friday afternoon at his inauguration, Sata promised to create jobs and transform government within 90 days – a pledge he made during his campaign.

The leader of the PF also indirectly dispelled widespread concerns that he would pounce on Chinese investors, saying he would work to attract foreign investment, but stressed that investors “need to adhere to the labour laws” of Zambia. He has criticised Chinese investment in Zambia in the past.

In a show of reconciliation Sata arrived at his inauguration with Banda; the two have had a hostile relationship in the past.

“This is good news, we knew this time we were going to (win). Last time they cheated us and only beat us by 35,000 votes, but this time we did not give them a chance,” said Christine Chisulo, who was part of a group of young people who took to the streets in Lusaka’s Woodlands suburb to celebrate Sata’s victory.

Reacting to the PF’s victory, losing presidential candidate Ng’andu Magande said the only other times he had seen such scenes of joy over a political victory were when this Southern African country gained independence from Britain in 1964 and in 1991 when Zambia became a multi-party democracy.

“The removal of a government through the ballot sends an important message that (political) office belongs to the citizens and those leaders who do not do what is expected of them will be removed,” he said.

Banda conceded electoral defeat on Friday in a farewell address to the nation.

“The election campaign of 2011 is over. The people of Zambia have spoken and we must all listen,” said Banda.

He called for maturity, composure and compassion, and urged the victors to celebrate with a magnanimous heart.

“Enjoy the hour but remember that a term of government is for (five) years. Remember that the next election will judge you also. Treat those who you have vanquished with the respect and humility that you would expect in your own hour of defeat,” he said.

Banda said his party would accept the results as they would not “deny Zambians”. He said his party never rigged elections, never cheated and never knowingly abused state funds.

The outgoing president, who was in a sombre mood, wondered where his party had gone wrong.

“We must all face the reality that sometimes it is time for change,” he said.

Banda said he has “no ill feeling in my heart, there is no malice in my words”, saying he believed Zambia was still “in good hands”.

McDonald Lewanika, director of the Crisis in Zimbabwe Coalition, part of Zimbabwean civil society representatives observing the election, told IPS that while the ECZ could be commended for the transparency of the elections, they could have avoided the violence caused by voting delays.

“There were a number of issues which raised concern, especially issues of logistics, which resulted in unwarranted delays in some areas, and this is what led to the violence.”

On Thursday there were protests on the outskirts of Lusaka’s central business district and there was a heavy police presence in most parts of the Lusaka city centre.

There were also massive protests in the Copperbelt cities of Ndola and Kitwe on Thursday morning. In Kitwe, the Nakadoli Market, which provides employment for hundreds of locals, was razed to the ground by a suspicious fire. Police reportedly used water canons and teargas to break up protests. Some banks suspended business because of the violence.

In a notice to customers, mobile service provider Airtel Zambia announced that the company had closed its stores in the Copperbelt province.

Many businesses had closed and ordered their employees to stay at home until the situation normalised.