EUROPE: ‘Agenda for Change’ Leaves Middle-Income Countries Out in the Cold 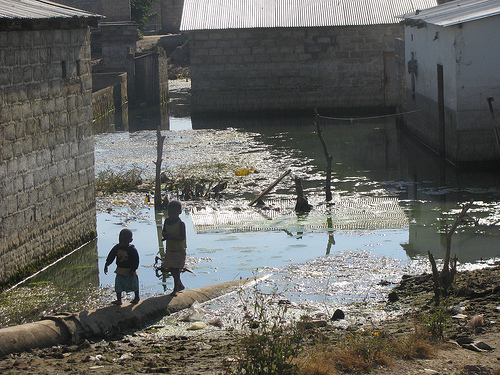 Zambia has recently been categorised as a middle-income country, yet two-thirds of the country's population live on less than two dollars per day. Credit: Ephraim Nsingo/IPS

BRUSSELS, Oct 31 2011 (IPS) - Last week the European Commission unveiled its ‘Agenda for Change’, a new policy framework outlining priorities for the European Union’s development aid and detailing the Commission’s renewed focus on economic growth as a means of poverty reduction, particularly in the world’s poorest countries.

However, while many have applauded this new agenda, international NGOs fear that several developing nations, especially middle-income countries, now risk loosing the Commission’s much-needed financial support. NGOs also raised questions about the role of the private sector in the new agenda.

To increase the effectiveness of existing aid, the EC organised several rounds of consultations with global partners, governments, private sector actors and NGOs this year, resulting in the publication of the ‘Agenda for Change’ on Oct. 13.

This document was subsequently discussed at an open stakeholder meeting on Oct. 19 during which Development Commissioner Andris Pielbags stressed the EC’s commitment to focus on “sustainable and inclusive growth”, a policy that includes supporting good governance, respect for human rights and democracy, gender equality, the role of civil society and the fight against corruption.

“Basically, the Commission is telling us that greater economic growth is a means of tackling poverty,” Laura Sullivan, an expert in EU development policy for the international NGO ActionAid, told IPS.

“We agree growth is a necessary condition (for poverty reduction) but it’s not the only one,” she said.

“Nigeria, for instance, has had growth rates Europe can only dream of. At the same time, Nigeria has one of the highest poverty rates in the world because of the high levels of inequality in the country.”

“Here we clearly see growth is not trickling down to the poorest,” she added.

The Commission is also considering cutting aid to middle-income countries: nations that fall into a middle-income range set by the World Bank’s world development indicators. Between them, these countries account for almost half of the world’s population.

“The list of middle-income countries contains emerging economies like India and China, but also includes Senegal, Congo, Zambia, Ghana and Namibia,” Sullivan told IPS. “It’s important to bear in mind that 75 percent of the world’s poorest people live in middle-income countries. There’s a risk that development aid will be cut to countries that still need it.”

“For instance, Zambia is a country where two-thirds of the population live on less than two dollars a day,” Sullivan stressed. “The gap between rich and poor is immense. At the same time, Zambia has recently been categorised as a middle-income country. What would the EU’s new strategy mean for Zambia? We are concerned that if you turn off the taps overnight, ultimately people will suffer.”

Natalia Alonso, head of Oxfam International’s EU office, told IPS, “Aid is intended to reduce poverty and should therefore be direced where it’s most needed. Middle-income countries are equipped with robust governmental structures, so these are the places where aid is most effective, where it can fully trigger change. It is very hard to do this in fragile states,” she added.

According to the Commission, no solid decision has yet been taken on the question of middle-income countries.

“We will indeed cut official development assistance to countries that don’t need it anymore,” Catherine Ray, spokesperson for Commissioner Pielbags told IPS. “This concerns emerging economies like Brazil, India and China. But that does not mean we will fully stop all support. We will continue to donate to the Global Fund to fight AIDS, Tuberculosis and Malaria, as well as support other initiatives that are active in Brazil, India and China.”

“Regarding the other middle-income countries, we are now studying which of them should continue to receive official development assistance and which countries would benefit from other, more specific types of funding,” Ray added. “Of course, we’ll take the level of inequality and the degree of fragility (in each country) into account.”

In spite of these assurances, NGOs are still troubled, particularly by the creeping influence of the private sector as a development actor.

“The Commission wants to put public money into the private sector as a means of generating more funding,” Sullivan told IPS. “We agree with that, as long as this money is (funneled) into domestic, small- and medium-sized enterprises. That’s where you can really make a change in people’s lives. Too many times in the past we’ve seen public money flowing to foreign multinationals via the World Bank.”

“If we engage the private sector, would it have the same goal as all of us, namely poverty reduction? That is not clear,” Alonso said, adding that the Commissions remains very vague about defining the specific role of the private sector.

But Ray believes that, “If you want growth, you need the private sector. You cannot do without it.”

“So the first objective of the commissioner is to develop a local private sector,” she added.

“Economies in Africa, Latin America and Asia are growing. There are a number of countries on track towards eliminating poverty. They are starting to create jobs and attract foreign investment. So our job doesn’t entail simply delivering aid anymore. We want to help these countries build the conditions for sustainable growth that is long-term, respectful of the environment and fairly distributed,” she concluded.