ACCRA, Oct 19 2011 (IPS) - As streams dry out, groundwater levels dwindle, and forests and other vegetation yield to droughts or sever storms, women who live their lives in the rural areas of Ghana have to spend more time and energy finding water and food for their families. 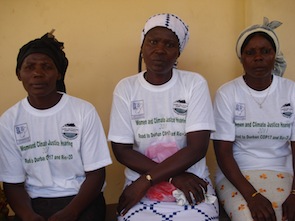 However, “decisions to tackle changes in the climate, which has become a threat to livelihoods in developing countries, are void of women’s participation,” says Kenneth Nana Amoateng, chief executive officer of Abibimman Foundation.

Yet these women are also the same people who pick up the pieces, improvise solutions and provide responses to the challenges imposed by climate change.

Amoateng said that most of the women directly affected by climate change are either inadequately represented or exempted from government’s policies and programmes designed to solve the issue.

Akos Matsiador, a 40-year-old fish seller who lives in Horvi village along Ghana’s coast, is now homeless after rising sea levels led to tidal waves surging through her village almost a year ago.

“The current of the sea was so strong that it submerged the entire village. Baskets of smoked fish that I had stored to sell to other women in other villages were swept away by the sea,” Matsiador says.

She was not only displaced, but was also rendered jobless as her source of income – selling smoked fish – was destroyed.

Matsiador and other victims of the tidal wave, like Mercy Hlordzi who lost her husband and her livelihood, now live in a shed by the village chief’s house.

“We are just there, we don’t do anything because our work has been destroyed by the sea,” Hlordzi says.

They, together with other women who have suffered a similar fate because of climate change, are hoping that the Ghanaian government will intervene and help them rebuild their lives.

Their voices are currently not incorporated into the countries climate change discourse and processes as they have little or no knowledge of the issue and its effects on their livelihoods.

In their quest to give a platform to these women, Abibimman Foundation, together with Greenpeace and various other non-governmental organisations, organised the Women and Climate Justice Hearings on Monday in Tema, Ghana. Women from various towns and villages across Ghana were brought together to share their experiences. 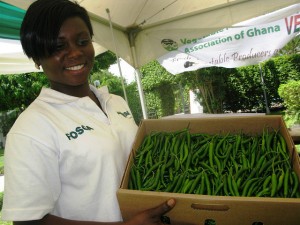 The Ghanaian government ought to do more to involve women in the design and implementation of climate change policies and programmes, officials say. Credit: Isaiah Esipisu/IPS

Memuna Sandow, an assemblywoman from the Wulugu electoral area in West Mamprusi district in northern Ghana, says the recent dry season in the region dried up water sources such as wells, streams and even some bore holes.

“The drought has lead to the loss of food, crops and animals, which are basic for human survival,” she says.

“They maintain the environment more than men, but when it comes to decisions regarding climate change, women are not represented,” Sandow adds.

She says, however, that women’s lack of knowledge on the issue of climate change has rendered them paralysed in the fight against it.

She says that it is necessary for the government to involve women in the design and implementation of climate change policies and programmes.

“Poor participation of women in the decisions has a negative effect on the efforts to combat climate change,” Sandow says.

“It is an undisputed fact that women constitute a large number of the poor in communities that are highly dependent on local natural resources for their livelihoods.”

She adds that Ghana, as a signatory to international conventions, agreed to infuse gender perspectives into ongoing research by the academic sector on the impact of climate change.

Mensah says government is considering the active participation of women in the development of funding criteria and allocation of resources for climate change initiatives.

“My expectation is that output from these climate change hearings will be communicated to appropriate agencies to inform plans at the national as well as local districts assembly,” Mensah says.

Amoateng reiterates an old Chinese proverb “we should see the earth not as an inheritance from our fathers but a borrowed asset from our children, which we will be required to give back to them.”