WASHINGTON, Oct 19 2011 (IPS) - High-level United Nations officials and advocates of U.S. involvement in U.N. peacekeeping initiatives in Washington this week urged lawmakers to continue and even ramp up support for the operations, which they say benefit U.S. security interests, protect civilians, and prevent failed states. 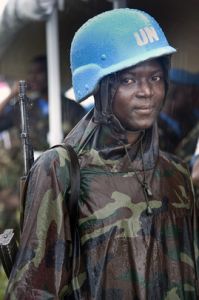 Female member of the Nigerian battalion of the United Nations Mission in Liberia (UNMIL) stands in the rain. Credit: UN Photo/Christopher Herwig

U.N. peacekeeping operations are carried out under mandates issued by the 15-member U.N. Security Council. The operations involve over 120,000 troops deployed in 15 missions on four continents.

The rallying cries came as Republican presidential candidates, as recently as a debate televised Tuesday night, launched repeated criticisms of U.S. funding for the U.N. and its operations ahead of the 2012 presidential election. The U.N.’s blue-helmeted peacekeeping troops have also faced criticism of misconduct in the past.

But defenders of U.N. peacekeeping operations, including advocates at two separate forums hosted by the Brookings Institute and The Partnership for Effective Peacekeeping (PEP), said this week that the U.N. has instituted reforms to make its missions more effective, transparent, and cost-conscious.

Victoria Holt, deputy assistant secretary of state for international relations in the Barack Obama administration, speaking at a panel hosted by PEP and the Better World Campaign, emphasised the administration’s support for the U.N.

“This is a commitment of this administration to get the funding to fully fund those” obligations, Holt said. She said support for U.N. peacekeeping operations was a policy the previous administration also shared.

Banbury said Tuesday that with reforms, the U.N. “will increasingly achieve what we all want: a peacekeeping capability in the U.N. that is able to deliver these not just complex but important mandates – including the protection of civilians – but at a cost that is affordable.”

Noam Unger, policy director of the Foreign Aid Reform Project at the Brookings Institution said Tuesday U.N. efforts were “under assault” and that anti-U.N. rhetoric sent a negative sign about U.S. commitment to international projects like the U.N., an institution he said was a means of promoting U.S. foreign policy and security interests in collaboration with other nations.

“It is a bad sign politically for where the U.S. is in terms of thinking about what the U.N. means around the world,” Unger said. “I think that we will get past it, but I am very concerned about that nowadays.”

A foreign policy committee in the Republican-led House of Representatives voted last week to approve a bill that would slash funding to the U.N. and its agencies. Observers say the bill has no chance of passing this year, especially in the Senate where Democrats have a majority. Secretary of State Hillary Clinton said she would press Obama to veto it, should the bill make it to his desk.

“I think this is a bad direction to go – I don’t think the bill has a prayer of passing,” Unger said. “There is some strong language from the administration about vetoing it.”

Unger said that U.N. peacekeeping efforts bolstered U.S. security by preventing failed states, a tenet that has become increasingly central to U.S. security policy, especially in building the cases for continued engagement in Iraq and Afghanistan.

The U.N. spends about eight billion dollars on peacekeeping worldwide each year, with the U.S. funding about two billion, or a quarter of that. While that spending has been criticised, advocates for U.N peacekeeping operations say critics have very little understanding of the breadth and scope of peacekeeping activities that are carried out with that funding and how they directly benefit the U.S.

Peter Yeo, director of the Better World Campaign, said Wednesday at a forum hosted by PEP that the U.S. should continue paying its dues “on time and in full”, and even bolster its support.

U.S. involvement in U.N. peacekeeping operations “allows us to work with other countries and share the cost while directly promoting U.S. interests,” Yeo said. “The rest of the world pays the bulk. That is a good deal for American taxpayers.”

He also said the U.S. had a key role to play in not only in supporting U.N. peacekeeping operations financially, but in making them more efficient. A report released by PEP, “U.S. Engagement in International Peacekeeping: From Aspiration to Implementation”, laid out 26 recommendations to “enhance and increase U.S. involvement in international peacekeeping”.

The report also recommends increased support from the department of defence to provide more women to peacekeeping missions to increase transparency and reduce sexual and gender-based violence – a step Kristen Cordell, a co-author of the report and advocate with Refugees International, said is proven to work. She said other countries were sending women to peacekeeping missions, and that the U.S. could do the same.

“We have an incredibly rich talent pool,” she told IPS.