WASHINGTON, Nov 4 2011 (IPS) - For the women who participated in the political and social revolutions during the Arab Spring in 2011, there is a significant opportunity to enact real change for women’s roles and relationships in the region – and also the possibility things could go the other way. 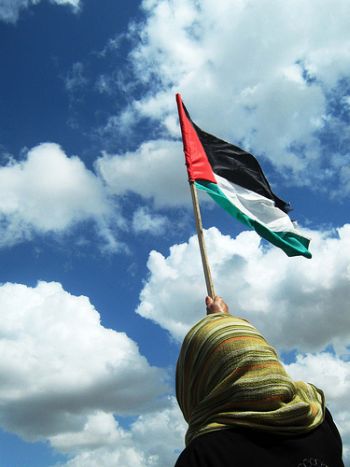 For Palestinian women, the uprisings are nothing new. Credit: Eva Bartlett/IPS

Such was the focus of a U.S. Senate Foreign Relations joint subcommittee hearing in Washington Wednesday, in which witnesses testified about the role of women’s participation in the Arab Spring, and the outlook for the future.

The subcommittee on International Operations and Organizations, Human Rights, Democracy and Global Women’s Issues is the first of its kind for Congress, and met with the intention of recognising and defining this moment of transition.

“It’s not every day that you’re negotiating a new social contract, that you’re creating a new constitution,” said Manal Omar of the U.S. Institute of Peace, who commented not as a member of USIP but as a witness in her testimony before the Senate subcommittee.

Omar stressed that the urgency to solve the myriad of problems facing countries following the Arab Spring could actually be a detriment if all social groups are not included in the process.

“If this process is fast-forwarded, women, minorities (and) other groups who are marginalised politically will be missing from the decision-making table,” she said.

The role of women in the Arab Spring has been heralded as a key to the success of the social movements, and has been recognised even by the international community.

The 2011 Nobel Peace Prize was awarded to Yemeni citizen and journalist Tawakkol Karman, called the “iron woman” of the Arab Spring, who shares the award jointly with two other women, each of whom demonstrate an element of establishing women’s rights and full participation.

“It is a time of critical opportunity for women and girls in the Middle East and North Africa, but it also a time of serious risk for women’s rights,” said Mahnaz Afkhami, founder and president of the Women’s Learning Partnership, during her testimony at the hearing. “There is a very real possibility that women will not only be marginalised but also lose ground here.”

The issues facing women in the participating Arab Spring countries range from access to voting, property and family rights, and educational and economic opportunities.

Afhkami, whose organisation is a partnership of women’s rights activists and non-governmental organisations in 20 countries, said that women were facing challenges rooted in history.

“Traditional social and cultural norms have relegated Middle Eastern women,” Afkhami said in her testimony. “They often lack the social, economic, and political power they need to overcome antagonistic groups and aggressive policy.”

Witnesses said that although the push for democratic reform and the inclusion process for women was a significant step, there were immediate concerns of a push backwards in the fight for women’s rights, and the effects could be detrimental in the long-term.

“Despite the rhetoric of democracy that drove the reform movement in Egypt, the large numbers of women who played key roles during the Tahrir Square protests, and the longstanding networks of women’s civil society organisations in the country, no women were included in the country’s constitutional reform committee,” Afkhami said.

The most comprehensive effort to create an inclusive policy for women on a global scale, addressed at the Senate subcommittee hearing, has been the United Nations Convention on the Elimination of All Forms of Discrimination Against Women (CEDAW), adopted by the U.N. General Assembly in 1979, which works to both define discrimination and set guidelines for nations to impose equality-driven legislation.

“No country can benefit if it leaves half of its country behind,” said Melanne Verveer, ambassador-at-large for global women’s issues at the U.S. Department of State, in testimony at the hearing.

Thus far, CEDAW has been ratified by 187 out of 193 U.N. member countries, with the exceptions being Iran, Somalia, Sudan, two South Pacific island nations, and – some argue the most symbolic – the U.S.

While the Barack Obama administration has come out in favour of CEDAW and its mission, the treaty has yet to be brought to the Senate floor for a vote since 1980, despite the U.S. playing a role in its drafting.

“The U.S. is schizophrenic when it comes to treaties – it works on creating them, but then has problems ratifying them,” Kraus told IPS, who said that failure of the U.S. to ratify CEDAW could hurt its credibility when advocating for women’s rights in other countries.

“U.S. ratification would provide credibility to U.S. diplomats when they urge other nations to abide by commitments they made when they ratified CEDAW,” he said.

CEDAW’s design is context-specific – the convention permits each country to determine when and how to bring its policies in line with ending discrimination against women.

“It’s up to each country as to how to implement (CEDAW),” June Zeitlin, director of the CEDAW Education Project at the Leadership Conference on Civil and Human Rights, told IPS. “The programmes we have to combat violence against women may be different than another country, but protecting women against violence is a universal right.”

The adjustments that each country makes upon enacting CEDAW, or the inclusion of reservations, understandings and declarations (RUDs), are present in most enactments of the treaty, experts said, but that the ultimate goal was equality without reservations.

“Once governments have adopted the treaty, women use it as a tool to improve the status of women in their country,” Kraus told IPS. “In Morocco and Tunisia, political pressure resulted in their reservations being scrapped – it’s an evolutionary process.”