BELGRADE, Nov 4 2011 (IPS) - The path of reconciliation in former Yugoslavia has taken a musical turn, as the philharmonic orchestras of Ljubljana, Zagreb and Belgrade team up for their first joint season since 1991. 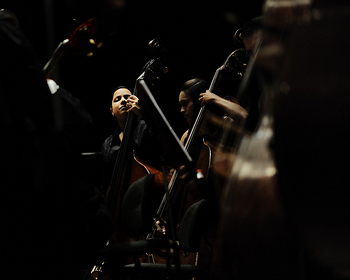 Former Yugoslavia crumbled in a series of bloody separatist wars throughout the ‘90s that claimed more than 200,000 lives.

Since Slovenia, Croatia, Bosnia-Herzegovina, Serbia, Macedonia and Montenegro were all born out of this bloodshed, their process of reconciliation has been slow. Animosities and hatred run deep, particularly between Croats and Serbs.

To promote cooperation and better communication between the new nations, the national directors of three Balkan philharmonics have organised a programme of five performances that will rotate through the capitals of Slovenia, Croatia and Serbia.

They chose to name the programme ‘Pika, Tocka, Tacka’ – the Slovenian, Croatian and Serbian words for ‘dot’ or ‘full stop’ – to symbolise an end to animosities in the region.

“The national orchestras are confident that they can cooperate despite our history of conflict and believe that this cooperation depends on the people,” Ivan Tasovac, director of the Belgrade Philharmonic told IPS.

“Changes cannot be dictated from the top and smart politicians have recognised this message,” he added.

The programme began to drum up support two months ago, following a concert by the Belgrade ensemble in the Croatian coastal town of Dubrovnik for the first time in 20 years, Tasovac told IPS.

In 1991-1992 Dubrovnik was heavily bombarded by the Serbian army and forced to live under siege for six months.

However, the situation calmed when Croatian media welcomed the performance with an article by the prominent music critic Branimir Pofuk entitled, ‘Why I’m not afraid of Serbian violins.’

Pofuk told IPS that ‘Pika, Tocka, Tacka’ represents “yet more proof that musicians are re-building old and making new bridges and that politicians can only follow.”

For his colleague Denis Derk, the joint programme marks, without any doubt, “putting an end to mutual skirmishes and prejudices” that still exist in the region, which was torn by wars two decades ago. “It (the cooperation) opens new doors for new cultural cooperation in this part of Europe, and the beginning was marked with maestro Mehta’s support at the Dubrovnik concert.”

Prior to that concert, Mehta told reporters that “friendship and building of bridges” was the goal of Belgrade Philharmonic’s performance in Dubrovnik. “The concert represents much more for me than simply music,” he added, expressing support to the joint ‘Pika Tocka Tacka’ project as a step in the right direction. “To prove this, we’ll leave our hearts at the stage in Dubrovnik.”

“The ‘Pika, Tocka, Tacka’ programme proves that art has the power to unite people; the players and audience become one family,” Tasovac said.

“Besides this, all three national philharmonics share the same history of being held hostage to politically motivated funding,” he said, adding that each government has been reluctant to invest in fine arts, while simultaneously allocating large sums of money to pop music festivals or Balkans brass band competitions.

To combat this problem of underfunding, the Belgrade Philharmonic launched an unusual appeal to the public a few years ago, drawing attention to the state’s negligence in financing the arts.

In a self-parodying newspaper advertisement, it called on music lovers to show financial support by promising that an “85-year-old orchestra with a rich repertoire will play at your house for a reasonable fee. We can be booked for weddings, funerals, baptisms and birthdays – we have appropriate attire for all occasions.”

The ad succeeding in securing more funding from the state, as well as drawing immense support from the Zubin Mehta Belgrade Philharmonic Foundation, which solicited donations from a variety of large international and Serbian companies, and contributions from private individuals.

The Belgrade Philharmonic also stunned the public with its ‘New Years’ cycle, a performance series that celebrates the Jewish, Islamic, Gregorian and Julian calendars as well as the Chinese New Year, with concerts taking place a day before each holiday featuring music from local and international composers and conductors.

Belgrade-based leaders of Jewish, Islamic, Catholic and Orthodox communities all attend the concerts, which have drawn huge audiences since the beginning of 2010.

“We created this concert cycle out of respect for all the multicultural, multi-ethnic countries in the world,” Tasovac said. “The more people learn about each other, the fewer misunderstandings there are in the world. Though we are a small and (financially) deprived ensemble, we have created something big and we have big ambitions.”