‘Microcredit is No Magic Wand Against Poverty’

VALLADOLID, Spain, Nov 14 2011 (IPS) - While microcredit remains the best tool available to address poverty it is no magic wand and can only be a part of the larger development process, say experts gathered in this historic Spanish city. 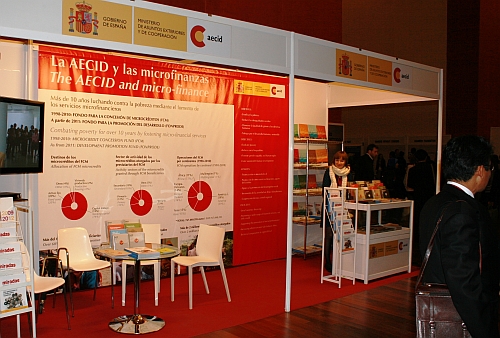 What is the real potential of microcredit for reducing poverty? Are microcredit institutions enough to help the neediest? What works and what does not? These were the questions being asked as the Nov. 14 – 17 Fifth Global Microcredit Summit kicked off on Monday.

José Antonio Alonso, professor of applied economics at the Complutense University of Madrid, thinks that microcredit suffers from overblown expectations when the reality is that some goals are achievable and others are myths.

Alonso counts among the myths the idea that anyone can become a businessman. “Entrepreneurial skills are necessary to run a successful microenterprise and not all potential customers are equally able to take on debt”, he told IPS.

The professor said microfinance institutions continue to be an important tool to reduce the poverty, but they have to be integrated into a larger view of development.

According to Alonso, the most important achievement of microcredit is reduction in vulnerability as the World Bank report, ‘Voices of the Poor – From Many Lands’, shows.

Todd Bernhardt, director of marketing and communications at the Washington-based Grameen Foundation, said that microcredit institutions alone are not the answer to poverty. “It is also necessary to have a broader view of development and include factors such as knowledge, savings, healthcare and a good framework of regulation.”

The Grameen Foundation helps replicate Bangladesh’s Grameen Bank microfinance model around the world through a global network of partners.

Bernhardt said the Grameen Bank model is sustainable because “the savings of members flow and can be reused by other borrower-owners.” The model also concentrates on income generating activities rather than consumer spending.

“The impact of microfinance in MDG (Millennium Development Goals) is more associated with reduction of poverty, not only because of better incomes but also because of capacity building,” Bernhardt told IPS.

“In addition, there is a huge effect on the other MDGs,” Bernhardt said. “When credit is given to a woman it increases her self-confidence as also levels of education and health for herself and her family. In other words, microfinance has a ripple effect on the MDGs,” he told IPS.

India, according to Bernhardt, presented a case where there were no conducive polices. “Microfinance institutions in India are prohibited from offering savings accounts to borrowers, who are forced to borrow money from commercial banks or sources.

“This is sometimes reflected in higher interest rates charged to borrowers, as compared to institutions like Grameen Bank, which leverages funds from savings and passes them on to borrowers,” Bernhardt said.

Even so, according to a report released by the Microcredit Summit Campaign (MSC) – a programme of the United States-based advocacy group RESULTS Educational Fund – nearly 9 million Indian households involved in microfinance rose above the 1.25 dollars-a-day poverty threshold between 1990 and 2010.

This is good news coming as it does at a time of difficulties for the sector in India and elsewhere.

The microfinance community attending the summit is taking promotional steps such as introducing the ‘Seal of Excellence’ to recognise microfinance institutions with significant outreach to poor and excluded households.

The MSC aims to reach 175 million of the world’s poorest families by 2015 and ensure that 100 million of those families move above the World Bank’s 1.25 dollars-a-day poverty threshold.

According a recent, unpublished report from the Consultative Group to Assist the Poor, called ‘Latest Findings from Randomised Evaluations of Microfinances,’ the microfinance industry needs to continue to mature in ways that allow it to view poor customers as individuals.

“Some of those individuals will leverage financial services to smooth consumption; some to manage risk; some to make investments where they have the skill and resources to profit from; some will do all of the above,” the report concludes.

It was shown at the summit that when the ability of microfinance institutions to deliver education and health services to the poorest are combined with savings, loans and insurance, they become powerful tools in the fight against global poverty.

The best yardstick of microcredit’s success is its own steadily growing popularity.

Some 137.5 million families received a microloan in 2010, according to the ‘State of the Microcredit Summit Campaign’ report. That supposes an 18-fold increase since the original microcredit summit was held in 1997 when only 7.6 million very poor families had taken a microloan.