VALLADOLID, Spain, Nov 16 2011 (IPS) - Microcredit can help a woman to have an income. It can, for better or worse, also transform gender equations in the public and private spheres. 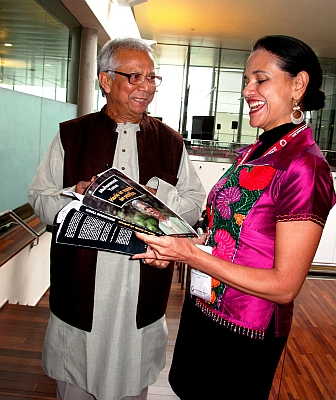 Making microfinance more meaningful for women in terms of real empowerment occupies much of the deliberations at the Fifth Global Microcredit Summit underway in this Spanish city.

Apparently, not all microcredit institutions (MFIs) are aware of the importance of contributing to a more integral and transforming vision that impacts women’s rights and human development.

Linda Mayoux, international consultant to Hivos and Oxfam Novib’s WEMAN Programme, classifies MFIs into three kinds: those that are minimalist, those that alleviate poverty and those that also provide empowerment avenues.

The first ones works on high rotation, high interest rates and high profitability; the second focuses on the impact that microcredit can have on the reduction of family poverty by providing loans to women.

“But to talk about a woman’s empowerment it is not enough for her to have better access to income and a better life for her family,” Patricia Padilla, manager of Asociación Alternativa para el Desarrollo Integral de las Mujeres (ADIM), told IPS.

It is important to have MFIs that also look at empowerment, the third on Mayoux’s list, Padilla said. With this philosophy, ADIM carries out development business services with gender approach and management of knowledge in Nicaragua.

“To achieve the goal of ending extreme poverty in women, who represent 80 percent of those at the bottom of the pyramid, it is necessary to have educational and training interventions, but other kinds of actions are needed to empower them,” Padilla said.

“After giving the loans, our institution offers training to the borrowers to increase their entrepreneurial and personal identity, their economic and life independence, their use of tools to increase their training skills in basic accounting principles as well as marketing and autonomy,” Padilla said.

“Autonomy leads to self-recognition, and from this point each woman can move towards personal realisation,” she added.

In the household sphere, they also receive the capacity to negotiate, to share incomes with their husbands. “In Nicaragua, women spend most of their incomes on home and children rather than investments on their own projects,” Padilla said.

Negotiation of income is not the only thing needed in the household. “The sexual division of labour in Nicaragua is such that husbands prevent their spouses from going to far away markets because of jealousy, and this affects women’s independence and sexual freedom,” she said.

In Honduras, the cooperative Comixmuld, shows the positive impact in the household that a larger development approach can have on women.

Comixmuld, a credit and savings institution born in the Siquateque market, has 25 years of experience behind it and a current enrolment of 23,000 women members.

“These women are living under the poverty threshold of less than 1.25 dollars per day and 52 percent of them are heads of the family. They are the owners of the cooperatives and they decide what they need most,” Olivia Castellanos, president of Honduran cooperative, pointed out.

To carry out their own projects, members requested time and their petitions were heard by the Fundación Iberoamericana para el Desarrollo, a Spanish NGO. Pilar Vereda, CEO of the foundation, supported the Honduran women in their initiatives to share household work and save time.

“Although, at the beginning, the idea was to focus on the exchanges in the scope of housework, the members of the cooperative decided to start exchanging their products,” Vereda told IPS.

“And now the members of cooperative not only share childcare but also exchange products and crafts of each woman to sell in different markets, and they work on a rotatory system to go to fairs,” Magda López, manager of Comixmuld, said.

“This coordination and exchange results in a wider variety of products offered on the women’s market stands and in a higher income, but especially permits women to have more time as they themselves demanded,” López concluded.

As Isabel Cruz, president of Foro Latinoamericano y del Caribe de Finanzas Rurales (FOROLACFR), indicated, “To achieve rights is not as easy as the access to credit, but one should be able to find a way in which microcredit and rights can progress at the same time.”

“Microcredit has created opportunities for women, but it has also generated effects not as positive in family and social life. It is necessary to go further with more policies in the education, psychology and sociology fields,” Cruz told IPS.

“In Mexico, for example, violence has increased,” Cruz said. “Credit can be a double-edged sword if the context is not kept in mind. Specific gender policy measures need to be in place.”