HAVANA, Dec 5 2011 (IPS) - Forget about finding Cantarrana on a map or travel guide to Cuba. “Nobody knew about us; we didn’t exist,” said one resident of this working-class neighbourhood on the west side of Havana. 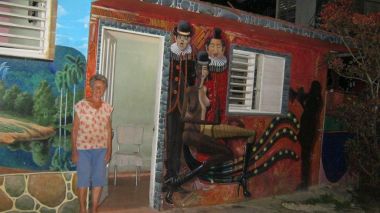 "I think my mural is the best," says Caridad Acosta. Credit: Patricia Grogg/IPS

Cantarrana, which means “frog croaks,” is so called because these critters used to fill the streets when heavy rains would cause nearby rivers to overflow.

But a street full of art – instead of frogs – has drawn attention to the neighbourhood, and is bringing about a change in the local residents. “Now people feel important and proud to live here,” Aleida González, a 47-year-old mechanical engineer who was born at No. 4405 63rd Street, commented to IPS.

Her home is one of the few on the block that do not have murals painted on their outside walls. “I prefer to care for the plants on my terrace, but I must admit that this idea of artists displaying their work on our homes has improved the image of our street. The neighbours are taking more of an interest in taking care of their walls, and there is more respect among everybody,” she said.

The participating artists came together in a project supported by the International Committee for the Development of the Peoples (CISP), an Italy-based NGO that has been working in Cuba for 20 years.

“It began two-and-a-half years ago, and is showing what can be done,” Eduardo Lima, who recently stepped down as the neighbourhood’s official representative after 12 years in office, told IPS.

“I think there are many social benefits, because it has even improved people’s moods; they’re happy because their street looks nice. Relations have improved in the community, and people are more sociable and interested in working together,” said Lima.

He said he hopes the idea will spread beyond Cantarrana, which borders Puentes Grandes, another neighbourhood in the Playa municipality on the outskirts of the capital. “For now we are going to focus on this street, which has 300 residents, look after it and make it an example of what can be done,” he said.

Inspired by the project, some neighbours have taken up painting under the guidance of the professionals. “This is a population group that was considered somewhat marginalised and isolated, and now they feel better because somebody is thinking about them,” said Miguel Angel González Pi, one of the artists involved in the teaching.

“It has been an incredible experience. This is the first time I’ve painted in the open air, with a wall as my canvas. Besides, the locals have showed us a lot of trust and affection, and they’re always willing to support and participate,” said Isabel María Llamas, a self-taught artist with 10 years of experience.

According to Paola Larghi, the CIPS representative in Cuba, the project is unique in that it did not emerge from the community, but was “somewhat induced” by the artists. “However, the people began getting increasingly involved in fixing up their houses, even contributing materials, which are not easy to obtain here,” she said.

In her opinion, another positive result of the project is that people now have a better appreciation of the visual arts and take better care of their surroundings. “There has been a real impact on improving hygiene, sanitation and the environment in the community,” said Larghi, who described the project as a “small spark” that lit other, broader fires.

Some of the other new undertakings by the CIPS include “Espacio Abierto” (Open Space), which seeks to promote transformative actions through art in several underprivileged neighbourhoods in the Playa municipality, joined progressively by local cultural institutions and groups of young people interested in community work.

“Our experience in Cuba led us to decide that socio-cultural development would be our sphere of action, and that art had an important role as a tool for transformation,” Larghi said during a forum on the subject held during the 14th Italian Culture Week in Havana, Nov. 21-27.

Cuban architects like Mario Coyula back the idea of active citizen participation in the challenges involved in rebuilding an urban environment hit by the accumulated deterioration of the last five decades. In a recent article about the city of Havana, Coyula said it was necessary to take advantage of the potential offered by public spaces “to create a sense of belonging.”

Baccin said that Cuban-Italian relations were very good in every sense, including a successful Italian Culture Week. Political relations between the two countries are quite smooth, as is the dialogue on bilateral and international issues of common interest.

“Within the European Union, Italy takes a position that is very favourable to opening up the possibility of a new framework for relations with Cuba,” he said.