KINGSTON, Dec 29 2011 (IPS) - In the latest efforts to mitigate the hazards associated with climate change, the Jamaican authorities are turning their attention to Negril, where decades of unplanned development is destroying the local ecosystem and eroding the famous beach. 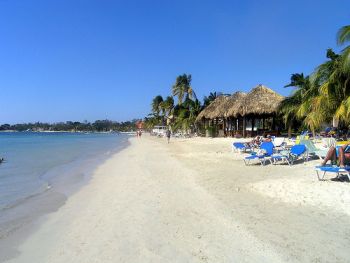 The industry that placed Negril on the map has been destroying the fragile marine ecosystem it needs to survive. Credit: gailf548/CC BY 2.0

Studies indicate that in the last 40 or so years, Negril has lost more than 55 metres of beach. And the Negril morass, first drained by government in the 1950s to provide additional agricultural lands, combusts regularly, choking the once sleepy town with smoke from smoldering peat.

The National Environment and Planning Agency (NEPA), the agency responsible for the management and protection of the island’s 1,022 kilometres of coastline, has begun the replanting of sea grass beds and mangrove forests in Negril as well as Montego Bay and Portland Bight. The agency said these areas have been severely impacted by the large-scale removal of coastal vegetation.

The replanting is one of several activities in an “integrated” multi- sector, multi-donor effort to halt the decline of the ecosystems that are crucial to the preservation of Negril’s prized beaches, project manager Mary Gooden said.

Partially funded by a 4.13 million-euro grant from the European Union, the project is expected to provide alternative livelihoods for those whose activities negatively impact the environment and to enhance the resilience of Negril and other vulnerable coastal areas to the impacts of natural hazards.

Gooden, who works with the Planning Institute of Jamaica, which coordinates climate change mitigation actions on the island, noted that the restoration of Negril’s marine wetlands is expected to boost the ability of the ecosystem to protect of one of Jamaica’s most valuable coastal areas from impacts of severe weather. Healthy wetlands dissipate wave actions and minimise their impacts on the shoreline.

The world famous white sand beaches “have been experiencing severe and irreversible shoreline and retreat” for more than four decades, a 2010 report from the Risk and Vulnerability Assessment Methodology Development Project (RIVAMP) warned.

The problems have been exacerbated by inland activities that continue to impact the reefs: unsustainable fishing practices, and the removal of mangroves to increase the number of hotel rooms and to provide material for charcoal and fish pot production.

Jamaica’s State of the Environment (SOE) report 2010 stated that between 2007 and 2010, 2,560 hotel rooms were added, with Montego Bay and Negril accounting for most of the new development at 29 percent and 12.8 percent, respectively.

In recent decades, Negril has recorded some of the highest rates of coastal erosion in the Caribbean. Studies by the University of the West Indies (UWI) and Smith Warner International for the Negril Coral Reef Protection Society indicate that Negril’s coastline eroded at an average rate of between .5 and one metre a year between 1968 and 2006.

The rapid sand loss, environmentalists say, is a combination of adverse weather conditions, the loss of mangroves, coral bleaching and a proliferation of infrastructure development that ignored coastline setback requirements. The widespread destruction of sea grass beds – believed to be a major source of sea sand supply – is said to be one reason for the rapid sand loss.

In 2008, Smith Warner estimated restoration costs of Negril’s beaches at between 19 and 25 million dollars – a high cost for the debt- ridden country. According to the U.N. Development Programme’s (UNDP’s) Pascal Peduzzi, it will also require extensive restoration of the natural environment.

Negril’s rapid decline and the high-priced rehabilitation forced authorities to adjust Jamaica’s U.N. Adaptation Fund application to make the area its primary focus, Gooden told IPS. The Fund will pay for major engineering infrastructure to protect the remaining beaches and carry out repair work, she said.

Made world famous by the so-called “flower children” of the hippie generation, the approximately seven-kilometre stretch of powdery white sand and crystal clear waters, authorities say, accounts for just over 25 percent of the island’s tourism earnings.

In 2010, tourism was estimated at 20 percent of Jamaica’s Gross Domestic Product (GDP), just over 50 percent of the island’s foreign exchange earnings and a quarter of all jobs. Some say that Negril’s ecosystem may actually account for much as 40 percent of GDP.

But the industry that placed Negril on the map, and on which the town depends, has been destroying the fragile marine ecosystem it needs to survive.

In the building boom of the 1980s, the desire for pristine white sand beaches drove developers to remove coastal vegetation and with it, nature’s buffer from the scouring wave action of a storm-tossed Caribbean Sea. Most ignored the Beach Control Act, which stipulates that coastal development must be set back at least 46 metres from the high water mark.

Hotels were built on the sand to provide the beachfront rooms the well-heeled tourists who flocked to Negril in the 1980s wanted. Treatment plants pumped millions of gallons of sewage into to the sea and increasing amounts of fresh water was pumped from the aquifers to satisfy the rapidly growing population.

Peduzzi, who heads UNDP’s Global Change Vulnerability Unit, recommends a comprehensive, cross-sectoral management plan to guide the recovery of the area to prevent destruction of the coastal ecosystems and to protect the resources that support the tourism industry.

“Negril is such a key area for Jamaica that whatever needs to be done must be successful,” he said.

Measures include the replanting of sea-grass beds and the location of data loggers to measure sea surface temperatures. The specially designed artificial reefs are intended to encourage the settlement and growth of coral polyps. The structure is to be fixed to the floor of the sea in an effort to prevent further damage to the fragile ecosystem.

Over the long term, McKenzie explained, breakwaters of 300 to 400 metres long are to be constructed offshore to provide additional protection for beach. Sand will also be pumped into the beach to nourish and rejuvenate those areas which have been eroded.

Other activities include land and rainwater management system and strengthening the capacity of local organisations in about 40 communities. Loans are to be made available to the private sector at less than one percent to protect their property and increase their ability to withstand severe weather impacts.

Gooden noted, however, that it will be the work of citizens to maintain and preserve the ecosystems and the lives they protect. “Our climate is changing and we have to change how we live and treat our environment,” she said.