Q&A: “Opposition to Restitution of Land Not Surprising”

BOGOTA, Dec 9 2011 (IPS) - “I find it extremely painful to see that there are people in Colombia trying once again to deceive” people displaced from their land, just when “they have hope of being recognised and compensated,” said Swedish diplomat Anders Kompass on a visit to this country to support rural victims of the civil war. 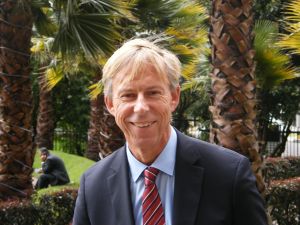 Anders Kompass on a visit to Bogotá to support the victims of forced displacement. Credit: Constanza Vieira/IPS

Kompass attended this week’s launch in Bogotá of the campaign “for a dignified life and the restoration of land”, with which United Nations agencies and the Catholic Church in Colombia are attempting to raise awareness among displaced persons about the rights that are guaranteed by the Victims and Land Restitution Law, which went into effect in June.

Under the campaign, which has the support of the Ministry of Agriculture and Rural Development, local U.N. offices and Catholic churches will inform victims of forced displacement about the benefits of the law, and how they can access them.

Until 2002, the Swedish diplomat was director of the U.N. High Commissioner on Human Rights (UNHCHR) Colombia office. But at the request of then President Andrés Pastrana, he was forced to leave that post after he issued a statement saying government forces were also partly to blame for the massacre of Bojayá.

On May 2, 2002, 86 civilians, including 45 children, were killed in the town of Bojayá in northwest Colombia when an improvised bomb fabricated with a gas cylinder hit the church where local residents had taken refuge from the fighting. The explosive device was fired by the Revolutionary Armed Forces of Colombia (FARC) guerrillas.

Dozens of far-right paramilitaries – 33 of whom were counted among the civilian casualties – were also killed, when they tried to take shelter with the local population.

To reach the town, some 250 paramilitaries, in at least seven boats, had passed three army checkpoints.

Civilian authorities and the UNHCHR office in Colombia had issued alerts, but the army had not done anything to protect the local population. Nor did it take any action against several small airplanes that flew paramilitary commanders in to the area.

The collusion of the military and the paramilitaries continued even after government forces took control of the area on May 7, 2002.

In his official report, released 18 days after the killings, Kompass described the incident as a war crime, and put the responsibility on the guerrillas, the paramilitaries, and the state, for both action and omission.

The statement drew a harsh response from then attorney general Luis Camilo Osorio, who was responsible for blocking a number of prosecutions for human rights abuses.

Kompass was also lashed out at by members of the military, the landowning elite, and right-wing political leaders, who were shocked that his report lay part of the blame on government forces.

Less than one month later, his mission in Colombia was brought to an end.

He is now director of the field operations and technical cooperation division at the U.N. Human Rights Office in Geneva.

His visit to Colombia this month came at a time when powerful hard-line right-wing factions are working hard to keep the Victims and Land Restitution Law from being enforced.

According to analysts, the law is an attempt by conservative President Juan Manuel Santos to go down in history, since the conflict over land is at the centre of the country’s half-decade civil war.

The weapons of the far-right are killing leaders of the associations of displaced persons demanding the return of the land that was seized from them – mainly by paramilitary groups – and are working to discredit the victims of forced displacement and civil society organisations that defend them.

Meanwhile, a bill making its way through Congress would expand the jurisdiction of the military justice system, to allow members of the armed forces to be tried by the military courts in human rights cases – a move the UNHCHR office in Colombia has systematically opposed.

IPS talked to Kompass during a brief break in his busy schedule. In the interview, he stressed that it is essential to make it clear to people what those opposed to land restitution are capable of.

He also underlined that without the pressure of human rights groups, the UNHCHR office in Colombia would never have been opened in 1997.

Q: What is the most important thing you have found on your return to Colombia? A: The Victims and Land Restitution Law – a landmark law that will be able to bring about real change in the country. As the agriculture minister (Juan Camilo Restrepo) said himself, the land situation has a great deal to do with the causes of the conflict and any possible solutions.

Obviously for me, who was here during very tough years when the (UNHCHR) office witnessed so many massacres and such widespread forced displacement, it is very important that the victims have hope of compensation and of being able to feel like citizens with rights again.

In that context, I find it extremely painful, although not surprising, to see that there are people in Colombia trying once again to deceive people displaced from their land, just when they have hope of being recognised and compensated.

Q: Do you see the victims as more visible and active today? Or because of your work, did you always notice their efforts? A: I think people always, always, always know when their dignity, their rights, are being violated, even if they don’t know exactly what international law says, and are not familiar with all the terminology that lawyers and activists use.

In this country, with its history, people have also learned not to accept the situation, and to work hard, while obviously making huge sacrifices. That’s why you have to speak with people with great humility and respect.

But the fact that the right to the restitution of land is now recognised by the government is important.

Q: What is your impression of those who are opposed to the victims’ law? A: For those of us familiar with Colombia, what they’re doing isn’t surprising. But that’s why next year and the following years will be extremely important, because they will define whether Colombia will finally be capable of marking a difference with what has unfortunately been its history. With many repetitions, in many different forms, but always a history of violence.

Q: Colombia bogged down in itself? A: Yes. That’s why we have to give it our support now. Because we must never forget those faces, those voices. We must never forget what happened so recently. That has been very much on my mind, since I left Colombia.

Q: Is it the government’s policies that have changed? Has there been progress? A: Yes, I hope so.