DURBAN, South Africa, Dec 5 2011 (IPS) - Negotiators at the 17th Conference of Parties owe it to the world’s more than seven billion people to deliver a deal with a work plan for agriculture, a sector that is expected to be the worst affected by climate change. 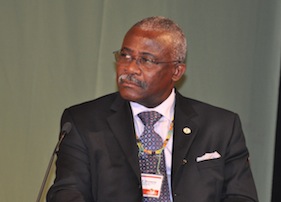 A grouping of agriculture and advocacy organisations presented an open letter to South Africa’s Minister of Agriculture, Forestry and Fisheries Tina Joemat Patterson calling for the inclusion of agriculture as an adaptation approach in the text to be agreed on by climate change negotiators.

The group, which includes the World Bank, CGIAR Research Program on Climate Change, Agriculture and Food Security and the World Farmers’ Organisation, has said that COP 17 should be the time for agriculture, which has been repeatedly taken off the agenda in two previous climate change negotiations.

“The most vulnerable regions of the world – developing countries – are disproportionately affected by climate change, despite contributing little to carbon emissions,” said the letter. “People in developing countries depend heavily on agriculture for their livelihoods, yet are increasingly challenged in their ability to produce sufficient food for their families and for markets.”

President of the International Fund for Agricultural Development Kanayo F. Nwanze told IPS that a new agriculture revolution needs to deliver smart solutions to the current challenges posed by climate change.[ Excerpts from the interview follow:

Q: Why a new revolution now? ? A: The whole discussion we are having right now is basically how to achieve climate smart agriculture, which essentially means getting the maximum out of smallholder farmers who make up the large population of farmers in Africa, and who are mostly women. They have to have access to basic inputs and financial services. It has to respond to all the current issues that have to do with the impact of climate change on agriculture.

We have to talk about sustainable agricultural systems. The Green Revolution was successful because it focused on very clear messages: increased fertiliser use, increased improved seeds and irrigation. But we found out in the long term that it is not sustainable. So now we need to look for sustainable approaches to production that do not destroy the environment and are available to a wide spectrum of farmers in Africa and in the world as a whole.

A new green revolution is needed to meet the challenge of feeding more than nine billion people in 2050. There is no magic bullet for eliminating hunger overnight because I do not believe that ideas can feed people. Ideas for a new green revolution are needed and climate smart agriculture can deliver those ideas.

Q: Agriculture is threatened by many factors, what is the first step to make it sustainable? ? A: The first step we need to take is on the policy agenda. We must have a commitment from the highest level of policy makers of government to say agriculture is a priority and they must put their money where their mouth is.

We are negotiating a political issue and there are a lot of things at stake. We are negotiating simple issues that are founded on facts and are fact-based arguments. Some people today are still denying there is climate change. How do you negotiate with someone who does not believe? That is the problem we have. We need real leadership. South Africa is doing a fantastic job leading this whole argument of putting agriculture on the agenda.

Q: What have we done well in agriculture development in Africa? ? A: Ten years ago you would not hear people talking about agriculture … but with the events of 2007/8 with the food price hikes and volatility, with riots, now people say agriculture equals food security, food security equals political stability and global peace. With that kind of linkage, you cannot ignore agriculture and that is something we have done well.