FREETOWN, Dec 22 2011 (IPS) - Sierra Leone’s Gola Rainforest remains a centre of contention as the local community here plan to take their chief to court next week over a controversial 50-year land lease to a mining company. 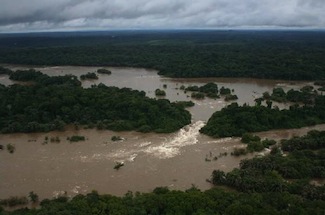 Members of the Tonkia Chiefdom claim their ancestral land of Bagla Hills in Gola Rainforest was illegally leased by their chief to UK-owned Sable Mining in April.

Mining companies have long coveted the land here for its iron ore potential as deposits in Bagla Hills are estimated to be worth 150 billion dollars.

The International Monetary Fund estimates that because of this natural resource, Sierra Leone’s small economy will have one of the biggest growth rates in the world at a staggering 51.4 percent in 2012, on the back of legal iron ore activity and exports.

But the community of Tonika remains furious about the deal.

“The chief is guardian of the land – he can’t sell it,” Alfred Williams, a member of the Tonkia Descendants Association, told IPS. Williams says the local community knew nothing of the sale until it appeared in the local media following Sable Mining’s statement to the London Stock Exchange.

Sable Mining issued a statement in May announcing its purchase of an 80 percent interest in Red Rock Mining, which had apparently bought the lease for 206 square kilometres of Bagla Hills from the local Tonkia Paramount Chief.

But the lease has become even more controversial as the country’s President Ernest Bai Koroma declared the 75,000-hectare rainforest a protected area and a national park in December. The forest type is one of the world’s 25 global bio-diversity hotspots.

The government has also launched an investigation into what they describe as an illegal land sale.

Kate Garnett, from the government’s Forestry Conservation and Wildlife Management Unit, says Bagla Hills “is a case of Sable Mining having been deceived by a local man.” The government issued a statement saying that any sale of Bagla Hills, as well as mining in the rainforest, is illegal.

The government’s Director of Mines Jonathan Sharkar said that the Ministry of Mineral Resources has never dealt with Sable Mining Africa.

“Sable Mining have never applied for a mining concession in this country – we have no dealings with them,” Sharkar says. He also points out that any land rights are also only surface rights – any minerals are owned by the government.

A Sable Mining spokesperson, who did not want to be named, confirmed that they do not hold a current mining licence for Bagla Hills.

Sable Mining would not comment on the land rights and referred IPS to their statements from earlier this year. These claim land registration documents proving ownership of Bagla Hills by Sable Mining have been filed at the land registry. The government, however, denies this.

But the case still dominates talk shows in this West African country. It led to a local demonstration, and in September the country’s Resident Minister William Juana Smith requested journalists refrain from reporting stories that had “the potential of creating conflict.” He had threatened that serious action would be taken against anyone doing so.

But the issue remains volatile as it concerns the livelihoods of the community. The Tonika community once made a good living mining gold in the forest, selling timber, farming and hunting. This will now stop because of the lease, says Williams.

“While the chief gets rich, people in Tonkia are left poor and aggrieved, without schools, hospitals and jobs. Young people need work – some of us say through mining, some say through the Gola reserve,” says Williams.

Augustine Sannoh, from the civil society movement, East Kenema, says that the chief has mobilised a small band of pro-mining individuals.

“He continues to galvanise support – even though there’s a court case to answer. The problem is that local people struggle to see the financial benefits of Gola Rainforest National Park. You can now only take firewood and fish for personal consumption. You can make honey or rattan products to sell, but these have a lower economic value than hunting and mining. It’s a big local dispute still.”

Williams also says the Gola Forest Programme (GFP) that manages the national park is yet to help people find alternative livelihoods as promised.

“We’ve supported with roads, bridges, culverts, and medical centres,” he says. Marris says the GFP recognises that providing alternative livelihoods to the community is a key strategy to forest preservation.

Plans are underway for various projects including carbon trading “which could earn tens of millions dollars,” as well as small enterprise development, and eco-tourism.

“It’s a process, it’ll take time, but in the meantime, we are mandated to represent government – no mining is permitted by individuals or by companies,” says Marris.

However, Garnett says communities still believe that mining will transform their lives.

“There are many examples where only environmental destruction has been left behind,” Garnett says.

She says the Forestry division was planning to take communities on visits to mined sites, “to show how mining can leave little positive community impact.”

“The law says no mining and we agree with conservation for now, but I have to say people want mining here because it is a quick way of getting money. No one wants to be poor, everyone wants to be rich,” Musa Taimeh, chairperson of the Tonkia Descendants Association, says.

Natalie Ashworth, from watchdog group Global Witness, says that people have an unrealistic expectation of what mining can offer them.

“People think it is going to change everything and provide thousands of jobs, which of course it is not. I doubt Sable Mining would have acquired Red Rock if they did not think they would be able to apply for a mining license at some point. As long as Sierra Leone is poor and has so few options, Gola Rainforest will always be threatened,” she says.