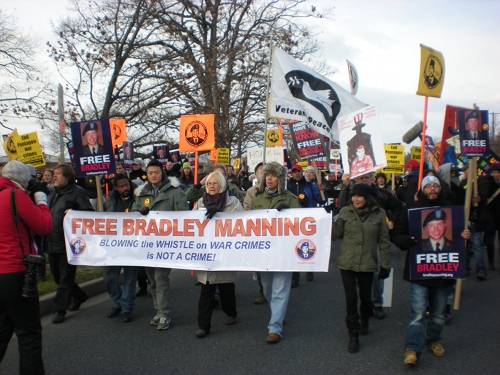 Protestors rallied outside a US military base to support Bradley Manning, the Army intelligence analyst who gave classified information to Wikileaks. Credit: Charles Davis/ IPS

WASHINGTON, Dec 17 2011 (IPS) - Hundreds of people gathered today outside a U.S. military base where evidence against Bradley Manning, the soldier accused of leaking classified information to the whistle-blowing website WikiLeaks, is being presented before a military judge for the first time since Manning’s arrest.

An U.S. Army intelligence analyst, Manning was arrested in May 2010 by U.S. military police in Iraq when a government informant reported him to law enforcement after he allegedly confessed to leaking to the public scores of classified information containing evidence of corruption and war crimes.

He has been charged with aiding “the enemy” through the disclosures, a charge that carries the possibility of death, though prosecutors says they are seeking a life sentence.

“Bradley shouldn’t be doing time for the Pentagon’s war crimes,” chanted approximately 300 supporters outside the gates of Maryland’s Fort Meade, home of the U.S. National Security Agency (NSA), as dozens of police and a helicopter circling above looked on.

The rally, one of 50 taking place across the world, coincided with Manning’s 24th birthday and the second day of court hearings aimed at determining whether evidence against him is sufficient to proceed to trial. According to Manning’s counsel, David E. Coombs, the hearings are expected to conclude before Christmas.

Manning is accused of leaking video evidence of a 2007 massacre outside Baghdad in which at least 18 people, including two Reuters journalists, were killed by U.S. troops in what many consider a war crime.

He also reportedly leaked hundreds of thousands of State Department cables exposing U.S. support for dictatorial regimes, the Obama administration’s responsibility for a missile strike in Yemen that killed dozens of women and children and the cover-up of child rape by private U.S. military contractors in Afghanistan.

“He did the right thing,” said Michael Patterson, a 21-year-old Alaska native and veteran of the Iraq war. A former U.S. Army interrogator, Patterson credits Manning – and the “Collateral Murder” video of the 2007 massacre in Baghdad in particular – with finally turning him against a war he once supported.

Rather than making him a traitor, he said, Manning’s actions demonstrated his commitment to upholding a “soldier’s honour”.

Despite White House claims that the disclosures threatened U.S. national security and the lives of U.S. informants named in diplomatic cables, a State Department review conducted earlier this year concluded that they had caused no serious damage.

At the rally, protesters from around the country – including more than 40 from the Occupy Wall Street movement in New York – waved signs and chanted slogans proclaiming Manning a hero who was being prosecuted not for endangering America, but for exposing the dark underbelly of the American empire.

“When truth and justice are in jeopardy, it is the job of the solider to stand up and fight for a peace that transcends,” said Lieutenant Dan Choi, a prominent activist who was discharged from the military for being openly gay. “Bradley Manning did that and he should be free.”

“He is not the one on trial,” Choi added. “The United States of America is on trial.”

Though charged with aiding the enemy, Manning – based on online conversations he reportedly had with the informant who turned him in – explained that he was motivated by a desire to inform the American people about what was being carried out in their name.

“If you had free reign over classified networks… and you saw incredible things, awful things… what would you do?” Manning reportedly asked.

“I want people to see the truth, because without information, you cannot make informed decisions as a public,” he wrote.

Manning’s case has become an international cause célèbre not just because of what he allegedly disclosed, but also because of the way he has been treated in captivity.

For the first 10 months of his imprisonment, Manning was denied almost all contact with the outside world and held in solitary confinement 23-hours-a-day, contrary to the recommendations of mental health professionals and despite the fact he had not yet been to trial, much less convicted of a crime.

In March, the chief spokesman for the U.S. State Department, PJ Crowley, resigned after publicly remarking, “What is being done to Bradley Manning is ridiculous and counterproductive and stupid.”

Human rights group Amnesty International also denounced Manning’s pre-trial detention conditions as “inhumane”, criticism that ultimately led him to be transferred from Quantico Marine Corps Base in Virginia to Kansas’s Fort Leavenworth, where supporters say his treatment has improved.

But the Obama administration continues to steadfastly refuse requests by the United Nations’ special rapporteur on torture to meet with Manning as part of an investigation into his treatment at Quantico.

That fact led more than 50 members of the European Parliament to send a letter to President Obama and other top U.S. officials late last month demanding that U.N. access to Manning be allowed in light of reports that he “has been subjected to prolonged solitary confinement and other abusive treatment tantamount to torture”.

The Centre for Constitutional Rights, meanwhile, filed a petition on Dec. 16 with the U.S. Army Court of Criminal Appeals demanding that lawyers for WikiLeaks founder Julian Assange be allowed full access to the proceedings against Manning.

Many observers speculate that Manning’s harsh and unusual treatment is both an attempt to intimidate other would-be whistle-blowers as well as an effort to intimidate Manning into testifying against Assange, who is currently the subject of a U.S. grand jury investigation.