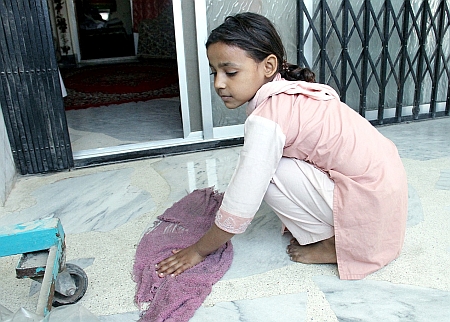 Eldest among six siblings, Ramzan is still coming to terms with the murder of his 11-year-old brother, Shan Ali, who worked as a child domestic worker in a posh locality in the national capital, Islamabad.

Ali was allegedly strangled by his employer, Atiya Al Hussain, on Jan. 5, for neglecting her child.

She and her husband, Mudassar Abbas, told police that Ali had committed suicide, though the autopsy suggested the boy had been strangled to death.

“The woman has since confessed that Ali neglected her seven-month-old son while she was trying to catch up on her sleep and had, in a fit of anger, strangled him,” Ramzan told IPS over phone from Islamabad, where he works as a security guard in an office.

Many wealthy households employ children, some even as young as six, a practice not prohibited by law in Pakistan.

Because of the invisible nature of this issue and the difficulty in accessing domestic child workers, no recent nationwide study exists. In 2003, UNICEF reported that eight million children, under 14 years of age, were engaged as labourers in brick kilns, carpet weaving units, agriculture, small industries, and in homes.

An International Labour Organisation (ILO) report in 2004 estimated that around 264,000 children were engaged in domestic labour in Pakistan.

Child domestic workers can often been seen sitting meekly in the corner of expensive restaurants keeping an eye on a sleeping baby while the employer’s family enjoys a sumptuous dinner. They accompany rich kids to birthday parties, but do not take part in the celebrations.

“In Pakistani culture it was once considered an act of charity to employ poor children,” explained Samar Minallah, an anthropologist and a documentary filmmaker.

“In the past, there was a culture of entire families of employees being looked after by feudal lords. With time we saw this disappearing and the child was separated from his parents and employed in a nuclear family setup,” she said.

In many cases, said Minallah, the child is the only worker in the house. “I witnessed this in many posh urban areas,” Minallah told IPS. Recently she made a film ‘I have a dream’, on the dark reality of what she calls the “worst form of exploitation of children.”

“Many families prefer to employ young boys and girls because there are women and daughters in the house. They feel safer around them,” explained Ramzan, who does not find children working in whatever capacity of any consequence or even hazardous.

Sending children off to work in homes could mean additional income, says Anees Jillani, an advocate at the Supreme Court of Pakistan. “And then there is the additional incentive of having to feed one less mouth and more space in the room that they call home,” he explained.

Over the years, however, the Pakistani media have been consistently reporting on the abuse and violence that child domestic labour often suffer at the hands of their employers.

In the last two years, the Society for the Protection of the Rights of the Child (SPARC), a non-governmental organisation, has documented 18 cases of extreme violence inflicted by employers, resulting in the death of 13 children and serious injuries to five.

To date not one employer has been charged as guilty. “The perpetrators usually buy off the poor parents in out-of court settlements,” said Jillani, who is also a child rights activist. Last year, a six-year-old Laiba’s body was found in a deserted place in the eastern city of Lahore, in Punjab. She was beaten to death by her employers for urinating on the kitchen floor.

Taqi Usman, 12, was clubbed to death by his employer for not feeding her dog. In most cases, domestic workers were penalised for being just who they were – mere children.

In 2010, when 12-year-old Shazia Masih, a maid in an advocate’s house died, the media coverage was intense. The paltry sum of 720 rupees (eight dollars) a month in return for washing dishes, mopping floors and cleaning toilets helped pay off her family’s debts.

There were 17 blunt injuries on Shazia’s forehead, cheeks and scalp and she died after the wounds inflicted on her by the employer became infected.

“Clearly the profiles of the employers suggest that this has nothing to do with literacy levels. It is a reflection of how far a society tolerates injustice and exploitation,” said Zarina Jillani, who works for SPARC.

Reacting to such cruel deaths, SPARC urged the government to take immediate steps to ban child domestic labour in line with laws that already prohibit children from being employed in hazardous industries.

SPARC’s Jillani considers domestic labour even more hazardous than factory work because of its “hidden nature, slavery like conditions, the complete control of the employer and the absence of a protective parent or adult and the potential for all kinds of abuse.”

While the country has ratified the United Nations Convention on the Rights of Child, advocate Jillani rues there is no legal validity for it in the country. “The ILO has lately introduced a domestic labour convention but Pakistan is yet to sign it,” he told IPS.

Ramzan, who is completely unlettered like the rest of his siblings, says: “We don’t have the choice or the luxury to attend school. We all work, and the more hands there are, the easier it is to feed the many mouths.”