ARGENTINA: Parana River Not What It Used to Be

BUENOS AIRES, Feb 17 2012 (IPS) - Lower water levels and increasing pressure from overfishing in the Paraná river are causing an unprecedented decline in fish stocks in the river that is regarded as the second most biodiverse in South America after the Amazon river. 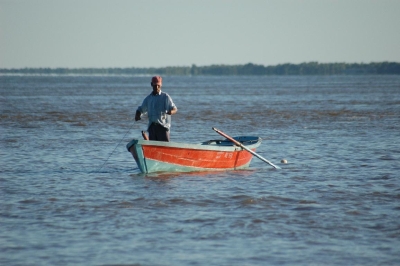 Fisherman on the Paraná river near the port of Antequera. Credit: Fundación Proteger

The problems faced by the Paraná river were described to IPS by experts studying this nearly 4,000-km river, which rises in southern Brazil at the confluence of the Grande and Paranaíba rivers, forms Argentina’s northern border with Paraguay, then flows south though Argentina until it empties through a delta into the Río de la Plata (River Plate).

Until the mid-1990s, Argentina had no quotas to limit exports of freshwater fish. Since then, and with greater urgency after the devaluation of the local currency, the peso, against the dollar in early 2002, the authorities have seen the need to set restrictions.

Fish processing plants mushroomed, buying vast quantities of shad, a herring-like fish, for export. In 2003, 45,000 tonnes were exported, and it was necessary to introduce a quota, which for the present season is 16,000 tonnes.

This limit was established by the national government, to be distributed among the eastern provinces of Santa Fe, Entre Ríos and Buenos Aires, through which the Paraná river flows.

Santa Fe was allocated an export quota of 7,000 tonnes out of the 16,000. But the provincial government, aware of the risk of overfishing to which NGOs have called attention, set a maximum of 4,500 tonnes.

Even so, experts consider that the pressure on the fishery is “enormous.”

“More shad is being exported than the ecosystem can replenish. This year, for the first time, the species has practically not reproduced. This has never happened before,” biologist Norberto Oldani from the province of Santa Fe told IPS.

Shad is the most important commercial species in the Paraná, and heads the list of freshwater fish for export. But it is also an important part of the food chain, as its eggs and larvae are eaten by predatory fish like the surubí (a type of catfish) and the golden dorado.

“For breeding to occur, there must be reproductively fit adults. Some time ago the specimens caught would be seven or eight years old, but now fishers are harvesting two-year-olds, that are just starting to lay their eggs,” the biologist complained.

Oldani is a researcher at the Universidad del Litoral, a public university, and the National Council for Scientific and Technical Research (CONICYT). He has monitored the fishery continuously since 1976 from the riverbank of the city of Paraná, in Entre Ríos.

“Year after year, resources are being depleted, species are disappearing, and catch specimens are smaller in size and lower in weight; in other words there is a loss of biomass,” he said.

Oldani pointed out that this is not only occurring with shad. “What is happening to the surubí is catastrophic. It’s an iconic Paraná species for both sport and commercial fishing. It can weigh up to 20 kg, and everyone wants to catch one, but evidently it cannot cope with the pressure,” he said.

He explained that shad populations need 80 percent of their biomass to be reproductive-age individuals in order to sustain fish numbers, but at present only eight percent are fit to breed. “Stocks must be managed sensibly, because it makes good business sense for there to be plenty of fish in the river,” he said.

The Amazon river harbours some 2,000 species, whereas the Paraná river has about 400, Oldani said. However, the Paraná is more productive per unit area than the Amazon.

“Fishing is the mainstay and food source for thousands of fisherfolk, and the system has good regenerative powers, but the present pattern of use is not working,” Oldani said.

In contrast, biologist Claudio Baigún claims to be “rather pessimistic, because there is a combination of several factors, some of which can be controlled and some that cannot.”

“The hydrological regime (daily, seasonal and annual fluctuations in water level and flow rate) has been unfavourable since 1998, and this is something that cannot be controlled,” Baigún told IPS, referring to a long period of scant rainfall during which dams on the upper Paraná have retained water, keeping water levels below normal downstream.

Normally, water levels in the river start rising in November and reach maximum levels in March. But since November 2011 water levels in the Paraná have not risen, and they may not rise at all this year. “When there is less flow, the dams upstream store water and let only the minimum essential amount through, and this has a big impact downstream,” he said.

Baigún, a researcher at the Laboratory of Ecology and Fisheries Production at the Chascomús Technological Institute in Buenos Aires province, said that from the environmental point of view, it is a good thing for a river to overflow its banks periodically.

“The people who live in these areas know that, except in extraordinary circumstances, flooding is not a tragic event. They coexist with the natural cycle, and if it fails, there is an impact on fishing yields,” he said.

As the Paraná has not flooded for a considerable period, under pressure from the expansion of soybean monoculture, cattle have been moved into the Paraná delta, close to its junction with the Rio de la Plata, where they graze in regrowth forests, destroy the river banks and pollute the water, he said.

“The cattle herd in this region has grown from 30,000 to 700,000 head,” said Baigún, who added that cattle farmers illegally build embankments to protect their animals, cutting off the connection between the river and the alluvial valleys where shad fry and other species shelter and grow.

“These isolated nursery lagoons are being lost to the species as a habitat,” said Baigún, who is also coordinator of the freshwater fish programme for the environmental organisation Wetlands International, which has its Latin American regional office in Buenos Aires.

Baigún pointed out that this problem is linked to a string of others, such as poor management of the fishery itself. “I am not in favour of exporting freshwater fish, because this benefits neither the fisherfolk nor the environment,” he said.

The fish processing plants pay miserably low prices to artisanal fishers, who are forced to increase their catch, putting more pressure on the fish population, he complained. “It would probably be better if they caught fewer fish and were paid more,” he said.

Regarding the export quota of 16,000 tonnes, Baigún said he was pleased that the government of Santa Fe has decided to be more cautious, although he questioned the way the limits are set. “What justification is there for such a quantity? No one knows, because there is no official report,” he said.

Baigún said some of the existing laws and regulations are good, others could be improved and others are outdated. “The Paraná is not the river it was in the 1980s or 1990s, when high-water levels and floods were regular and commercial and recreational fishing were in harmony,” he said.

For over a decade, there have been low water levels, fish scarcity, small-sized fish and a low reproductive rate, he said. Moreover, there are deepening conflicts between fishers, who blame each other for their ever decreasing catches.