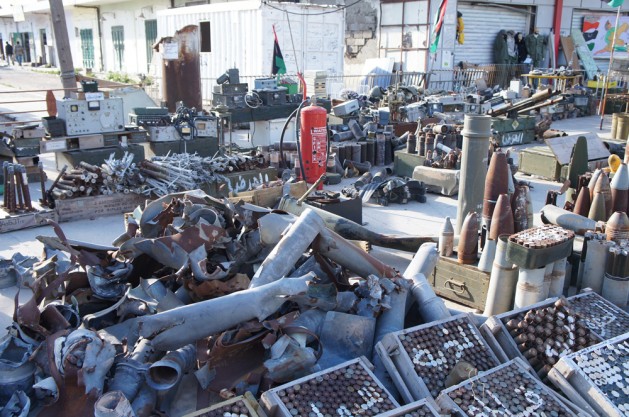 MISRATA, Libya, Feb 25 2012 (IPS) - This week more than half the residents eligible to vote in Libya’s embattled coastal city of Misrata cast their ballots for local council representatives in their first democratic election in decades.

“The elections were great,” says family man and aid worker Mohammed Amer, 31. “They went very smoothly. I went to the centre and elected someone, and my wife elected someone else,” he laughs. “It was like a big celebration. Everyone was happy. It is especially great for old men and women to see this.”

The 28 winners from a total of 242 candidates now form Misrata’s local government. These tangible results contrast with what is widely perceived as an opaque and complex national electoral process announced by the National Transitional Council (NTC) based in Tripoli. The NTC have slated elections in June for a national assembly, which will pick a committee to draw up Libya’s constitution.

Misrata, Libya’s third largest city with an estimated 300,000 residents, is still recovering from a brutal siege last year. A street side museum commemorates the city’s victorious role in the downfall of Muammar Gaddafi’s regime in October. The memorial is crowded with spent ordnance, memorabilia scrawled with graffiti, identification cards belonging to Gaddafi’s mercenary fighters, and a wall lined with pictures of Misrata’s dead and disappeared.

Multi-storey buildings remain pockmarked or gutted, especially along Tripoli Street, the main commercial artery. Queues are omnipresent outside banks to withdraw limited amounts of cash, and at gas stations. Egyptian migrant workers stand patiently at busy intersections holding paint cans and brushes to advertise their services, and a few business owners pour savings into the reconstruction of their small shops.

But Misrata, like other cities in Libya, has yet to receive reconstruction funds from the transitional government. Houses and businesses, including those owned by the previous government, lie damaged and dormant.

Mohammed Abdullah Ashab has sunk over 20,000 dollars into rehabilitating an upscale bookshop and a boutique filled with glittering gowns. These stores are in stark contrast to the piles of rubble and scrawled graffiti facing them.

“The NTC came to look at the damage,” he says. “But we won’t be compensated until a government is established. I am doing the reconstruction out of my own pocket.”

Atiya Al-Dreini, administration director for Misrata’s executive committee, and a winning candidate in the local elections, proudly shows off the refurbished Ottoman-era building housing the municipal offices. A destroyed wing is walled off; strewn with rubble and garbage. A brand new police car and two newly recruited traffic officers stand in the middle of the street in front.

“There is no national reconstruction budget yet,” Dreini says, noting that they took the money to clean up the office out of the current operating budget. “The committee to evaluate building reconstruction has finished its work, but is just waiting to include some people who fled their houses and are returning.

“This all takes time,” Dreini adds. “We had 42 years of corruption and need to break with the past. We are changing the whole system of the country, and this needs big money.”

Another stumbling block was bleakly illustrated in an Amnesty International report released this month. The report also covered Misrata, and warns that militias are one of the biggest threats to Libya today:

“Hundreds of armed militias, widely hailed in Libya as heroes for their role in toppling the former regime, are largely out of control. Their actions, and the refusal of many to disarm or join regular forces, are threatening to destabilise Libya, hinder the much-needed building of accountable state institutions based on the rule of law…”

“Most (brigade) members want to return to their professions – Misrata is a commercial region,” says Dreini. “Even during the tyrant’s day, most people didn’t want to join the security or police services. The mentality is still like that. But when they hear of clashes, like in Bani Walid, they will be ready to fight and join back with their brigades.”

Hasan Al-Homa, 31, sits outside a large sports complex with half a dozen young men in military fatigues and guns – part of an affiliated 200 militia that fall under Misrata’s military council leadership. He left his factory job to join a brigade during last year’s war. He wears the militia’s name on a laminated identification card.

Homa was wounded by a sniper during a ferocious battle in Misrata’s Tripoli Street, but recuperated in time to participate in the fall of Gaddafi’s hometown Sirte. He is married and has a two-month-old daughter. He is ready to return to his old job “once the national elections are over,” he says. “Even then, if there is a big (military) operation, we will join up to do it together.”

“We have about 200 brigades,” says Misrata’s military council head, Ramadan Ali Zarmouh, who reports directly to Tripoli’s Ministry of Defence. “Some rebels have gone back to their normal lives, but the brigades themselves still exist.

“Everyone knows that the brigades are temporary and must be dissolved at some point, and go back under police, military or civilian life,” he says. “We are currently establishing committees to work on short-term contracts for the Ministry of Defence. Those starting out will make 600 Libyan Dinars (around 480 dollars).”

International Crisis Group researcher Bill Lawrence is doubtful about an immediate capacity to rebuild the national army. “In Libya’s exceptional case there are no foreign troops or peacekeepers. So they are going to have to bring people in from the outside as trainers.

“No matter how many times the militias say they are going to disband, it’s not going to happen. The government doesn’t have strong institutions and is going to have to live with these militias, who are not ideological, but are defending turf and local issues under the military and civil councils.” (END/IPS/MM/IP/HD/RA/RM/SS/12)