KANO, Nigeria, Feb 8 2012 (IPS) - “I can no longer stay here in Kano as it rains bombs. The gun battles rattle us… Kano is no longer safe,” said pregnant Funke Nweke of her decision to flee Nigeria’s northern state with her five-year-old daughter. 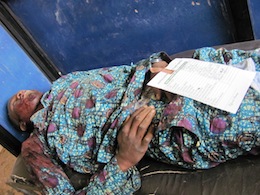 An injured man awaits treatment at the Murtala Muhammed General Hospital in Kano after the Jan. 20 bombings. Credit: Mustapha Muhammad/IPS

Nweke grimaced as she held her daughter, Nnenna, while they waited at Kano’s most popular motor park to board a bus headed to Nigeria’s south. She and her daughter are fleeing the state, as they fear being attacked by the Islamist extremists Boko Haram.

Kano witnessed the worst series of suicide bombings, bombs blasts and gun battles on Jan. 20. According to the president of the Civil Rights Congress, a human rights organisation based in the northern city of Kaduna, 256 people were killed in the fighting. However, the local police authority puts this figure at 184 dead.

Boko Haram claimed responsibility for the attacks saying they did so because their members in Kano have been arrested and were being persecuted and maltreated.

“We are responsible for the attack. I am the person who commanded our people to rain sporadic attacks, because we have sent an open letter to the Kano leaders to release our members arrested for no offence, but they refused,” the group’s leader, Abubakar Shekau, said on a YouTube video, speaking in the local Hausa dialect.

Shekau denied killing civilians in the attacks: “We are killing the police, the military and any other person who connives with them. We are not after civilians. And I enjoy killing a person, like I kill a ram and a chicken, provided that God ordains me to kill him.”

Back at Kano, despite her mother’s grim mood, Nnenna is happy to be leaving. “We are travelling. Bye,” she told IPS happily.

Nweke and her daughter were among several others who converged at New Road in Kano, and queued as they waited patiently to board luxury busses.

“Hundreds of our people, largely women and children, have left because they are traumatised with the attacks recently,” the leader of the Igbo ethnic group in Kano, Dr. Boniface Ibekwe, told IPS by phone.

“I cannot tell you the exact figures of the people that left but we are compiling names. Some have left, some are in hospital receiving treatment and some are still missing…Our men are largely here, we are not leaving,” Ibekwe said.

However, the security of the area remains uncertain. Just two days after the attacks on Kano, the country’s security services recovered more than 300 different explosive devices at various locations around the state.

Police bomb experts said that if the explosives had been detonated, it could have been disastrous for Africa’s most populous state and top oil producer.

While President Goodluck Jonathan said on Jan. 8 that the country would bring the perpetrators to justice, the country’s north faces an economic decline because of the attacks.

Kano is Nigeria’s second-largest city and the country’s centre of commerce. The Igbo community, which is being targeted in the attacks, own many of the businesses here.

“The Igbo dominate automobile, building materials, stationeries and electrical appliances businesses. They occupy 90 percent of these businesses. (If they flee Kano) it would not (be) good for Kano’s economy and that of other northern states,” an economics lecturer at Bayero University in Kano, Dr. Garba Ibrahim Shekau, told IPS by phone.

Shekau said goods being sold by the Igbo people in Kano would become scarce and a larger demand for these goods would see prices skyrocketing.

After the attacks in Kano more than 200 members of the group were arrested, though 80 percent of those arrested are believed to be foreign nationals.

“We have made arrested using intelligence gathering of more than 200 Boko Haram members, and we discovered that 80 percent of them are Chadians,” a senior police officer told IPS on the condition of anonymity.